In this sense, a product is a representation of form

where the product of and is usually noted as.

Derived from the Latin word producere in the meaning of bringing forward , “product” is originally the name of the result of a multiplication of two numbers (from Latin: multiplicare = to multiply). The use of the painting point goes back to Gottfried Wilhelm Leibniz , the alternative symbol to William Oughtred .

Here is always , i. That is, the product of two numbers is again a number. Products are also assumed to be associative here , i.e. H. 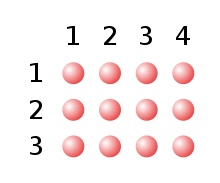 For example, if you arrange game pieces in a rectangular scheme in r rows of s pieces , you need for this

If one counts the number 0 to the natural numbers, then these form a half ring . The inverse elements regarding addition are missing for a ring : There is no natural number x with the property 3 + x = 0.

A product in which the number 0 appears as a factor always has the value zero: An arrangement of zero rows of pieces does not include a single piece, regardless of the number of pieces per row.

In words this table says:

For a strictly formal definition of equivalence classes of pairs of natural numbers, see the article on whole numbers .

You can add, subtract and multiply without restriction in whole numbers. The division by a nonzero number is only possible if the dividend is a multiple of the divisor. This restriction can be lifted with the transition to the field of rational numbers , i.e. to the set of all fractions . In contrast to their sum, the product of two fractions does not require the formation of a main denominator :

If necessary, the result can be shortened .

As Euclid was able to show, there is no such thing as a rational number whose square is two. Likewise, the ratio of the circumference to the diameter, i.e. the number of circles  π, cannot be represented as the quotient of two whole numbers. Both “gaps” are closed by a so-called completion in the transition to the field of real numbers . Since an exact definition of the product in the brevity offered here does not seem possible, the idea is only briefly outlined:

Every real number can be understood as an infinite decimal fraction. For example, and The rational approximations - such as 1.41 and 3.14 - can easily be multiplied together. By gradually increasing the number of decimal places, a sequence of approximate values ​​for the product is obtained - in a process that cannot be carried out in a finite time

Even on the set of real numbers, there are unsolvable equations such as . For both negative and positive values ​​of , the square on the left is always a positive number. Through the transition to the body of complex numbers , which is often referred to as adjunction , i.e. adding , the so-called Gaussian number plane emerges from the real number line . Two points on this level, i.e. two complex numbers, are formally multiplied taking into account : 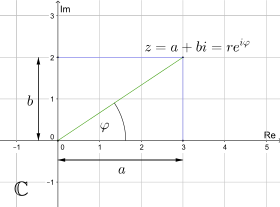 A complex number in polar coordinates

A complex number can also be written in plane polar coordinates :

Geometrically, this means: multiplication of the lengths with simultaneous addition of the angles.

Even the complex numbers can be expanded algebraically. A real four-dimensional space is created, the so-called Hamiltonian quaternions . The associated multiplication rules are presented in detail in the Quaternion article. In contrast to the above number ranges, the multiplication of quaternions is not commutative; H. and are generally different.

That the product of two numbers is odd if and only if both factors are odd is a well-known fact. Similar rules also apply to divisibility by an integer N greater than two. The even numbers here correspond to the multiples of N; an even number is divisible by two with no remainder. In the case of odd numbers, one should distinguish which remainder is left after dividing this number by N as an integer. Modulo 3 - as the saying goes - there are three remainder classes of integers: Those that are multiples of three, those with a remainder of 1, and those with a remainder of 2. The product of two such numbers always has a remainder of one modulo three.

an addition and through

a multiplication explained. The resulting ring is called the remainder class ring modulo N. If and only if N is a prime number , it is actually a field. Example: modulo 5 is the residual class of 2 inversely to that of 3, since 6 modulo 5 is one. The systematic finding of multiplicative inverses modulo N is done using the Euclidean algorithm .

If the ring R is commutative, the set (the set of all functions of a non-empty set M with values ​​in R ) also forms a commutative ring if addition and multiplication are defined component-wise. That is, if you can

If one chooses the real numbers with the usual addition and multiplication as ring R , and as M an open subset of or more generally of , then the terms continuity and differentiability of functions make sense. The set of continuous or differentiable functions then forms a subring of the function ring , which trivially has to be commutative again if or R is commutative.

Then the improper integral

for every real number t also finite. The function f * g defined by this is called the convolution product or the convolution of f and g. Here f * g is again integrable with a finite improper absolute value integral. Furthermore, f * g = g * f, i.e. H. the convolution is commutative.

The Gaussian bell curve can be characterized by the fact that its folding with itself results in a bell curve that is somewhat wider (see here ). The central limit theorem is based on precisely this property .

The set of all polynomials in the variable X with real coefficients also forms a so-called polynomial ring . The product is calculated as follows:

These rings play an important role in many areas of algebra. For example, the body of the complex numbers can be elegantly defined as a factor ring .

In the transition from finite sums to absolutely convergent series or formal power series, the product discussed here becomes the so-called Cauchy product .

The linear algebra deals with vector spaces and linear mappings between such. Various products appear in this context. In the following, the field of real numbers is mostly used as the basic field for simplification.

Already in the definition of a vector space V, the concept of submerged scalar multiplication on. This allows vectors to be “stretched” in general by a real factor, whereby in the case of multiplication by a negative scalar, the direction of the vector is also reversed.

The scalar product is a picture

The concept of a scalar product must be strictly distinguished from this . This is a bilinear mapping

with the additional requirement that is for everyone .

Therefore the expression is always calculable and provides the concept of the norm (length) of a vector.

The scalar product also allows the definition of an angle between two non-zero vectors v and w:

The polarization formula shows that such a length concept inversely always leads to a scalar product and thus also to an angle concept.

In , as the standard model of a 3-dimensional Euclidean space, another product, the so-called cross product , can be defined. It does an excellent job with various problems of analytical geometry in space.

The cross product is an illustration

Like every Lie product , it is anti-commutative: in particular, is

The so-called late product - also only explained in the - is not a product of two, but three vectors. In modern parlance, it corresponds to the determinant of three column vectors written next to each other and is probably the easiest to calculate according to Sarrus' rule . Formally there is an illustration

which is still referred to as a product today, probably only for historical reasons. The Spat product clearly measures the volume of a Spat in space.

If f: U → V and g: V → W are two linear mappings , then they are executed one after the other

linear. If one denotes the set of all linear mappings from U to V , then the composition of maps yields a product

In the special case U = V = W, the so-called endomorphism ring of V.

form. In the special case r = s = t of square matrices, this creates the matrix ring .

Composition of linear images as a matrix product

There is a close connection between the composition of linear images and the product of two matrices. Let r = dim (U), s = dim (V) and t = dim (W) be the (finite) dimensions of the vector spaces U, V and W. Let also be a basis of U, a basis of V and a basis von W. With respect to these bases, let the representing matrix be from f: U → V and the representing matrix from g: V → W. Then is

the representative matrix of .

In other words: the matrix product provides the coordinate-dependent description of the composition of two linear maps.

The “mother of all products that can be defined on V and W”, so to speak. Any other real bilinear product

The vector space Hom (V, W) of all linear mappings between two vector spaces V and W can be interpreted in a natural (bifunctional) way as the tensor product of the dual space V * of V with W:

The fact that Hom (V, W) is naturally isomorphic to the tensor product of the dual space of V with W also means that the representing matrix of a linear mapping g: V → W is a simply contravariant and simply covariant tensor. This is also expressed in the transformation behavior of representational matrices when the base is changed .

The Cartesian product M x N of two sets M and N fits at first glance, not casually in the presented product term one. However, there is a connection not only in the word “product”: The product of two natural numbers m and n was explained above as the cardinality of the Cartesian product of an m-element and an n-element set. Certain forms of the distributive law also apply .

Finite products with many factors

The factorial of a natural number n (written as n! ) Describes the number of possible arrangements of n distinguishable objects in a row:

The product symbol is based on the first letter of the word product from the Greek capital letter Pi ; it is also used as a sum symbol based on the sigma .

Since the product of natural numbers is commutative, one can also use an index set (and thus leave the order of the factors undetermined)

Here is an animation of the product spelling:

applies (compare Wallis product ). But what exactly is meant by the infinite product on the right? To do this, one considers the sequence of the finite partial products

If this sequence converges to a real number P , then one defines

A sequence of numbers is more precise . The infinite product

is called convergent if and only if the following conditions are met:

(The validity of the last two conditions is independent of which one has chosen in the first). In this case you bet

This limit value exists, because either there is at least one factor and from then on all partial products are zero or one can in the second condition o. B. d. A. choose.

Examples of lack of convergence

Although the sequence of partial products converges (towards zero), infinite products such as the following are not said to be convergent:

Extensive literature references on linear algebra can be found there .