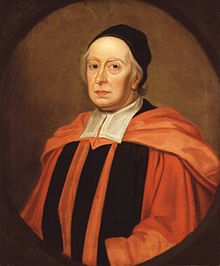 John Wallis (* 23 November July / 3 December  1616 greg. In Ashford , Kent ; † 28 October July / 8 November  1703 greg. In Oxford ) was an English mathematician who contributed to calculus and the calculation of Kreiszahl performed.

Wallis was one of the five children of John Wallis, the pastor of Ashford. His father died when he was just under six years old. As his talent was recognized early on, at the age of 14 he was sent to Felsted, Essex, to the school of the famous teacher Martin Holbeach, Felsted School , where he learned Greek, Latin and Hebrew. From December 1632 he studied at Emmanuel College in Cambridge, among other things, philosophy, geography, astronomy and medicine with a bachelor's degree in 1637. He continued his studies particularly in theology and graduated in 1640 with a Master of Arts and became a priest in the same year ordained. Mathematics, which at that time was only regarded as subject matter for traders, surveyors and similar professions, he did not learn at school or university, but, according to his autobiography, came into contact with it in 1631 when his brother was studying an arithmetic book for his business apprenticeship. After graduating, he was chaplain in Butterworth, Yorkshire , Hedingham , Essex and London. During this time he also began to be involved in the English Civil War on the side of the Roundheads . A clergyman friend of mine asked him, half jokingly, in 1642 whether he could decipher an encrypted message from the royalists, which he succeeded in this and in the following cases. He received the parish in St. Gabriel in London in 1643, but was financially independent after the death of his mother in the same year due to his inheritance. In 1644 he became a Fellow of Queens' College in Cambridge , but had to give up this post after his marriage in 1645. He went back to London, where he was also actively involved in the first meetings of the forerunner society of the Royal Society and began to study mathematics seriously by reading a book (Clavis mathematicae) by William Oughtred in 1647. Not least because of his cryptological merits, he was appointed by Cromwell to the Savilian Chair of Geometry in Oxford in 1649 , when the previous owner Peter Turner was dismissed for supporting the royalists. Wallis also later worked as a cryptologist, deciphering a secret message from Louis XIV intended to urge Poland to attack Prussia. He also trained many cryptologists. When Leibniz, a friend of his , asked him in 1699 to train cryptologists for the House of Hanover, the latter refused. In 1657 Wallis became administrator of the university archives at Oxford. Since he had spoken out publicly against the execution of Charles I , he retained his chair after the Restoration in 1660 and even became royal chaplain.

Wallis was able to perform extensive calculations (such as the formation of the root of a 50-digit number) in his head.

Wallis also wrote an English grammar (Grammatica linguae Anglicanae 1653) and edited texts by ancient Greek mathematicians (the treatise on the distances between the sun and the moon by Aristarchus of Samos , Archimedes' sand counters, the harmonics of Ptolemy and others). He also made known the work of the English Renaissance mathematician Thomas Harriot . When he condescendingly criticized an attempt by the philosopher Thomas Hobbes to square the circle, a violent exchange developed between the two, which did not cool down even after years and only ended with Hobbes' death 25 years after the start of the dispute.

Wallis contributed in his works to the development of the calculus before Newton, building on the work of Johannes Kepler , Cavalieri , Roberval and Torricelli . In 1656, in Arithmetica Infinitorum , in which he published studies on infinite series, he derived the Wallis product , with which one can approximately calculate the number of circles :

The formula arose from the integration of the function for n = 1/2 (i.e. the direct integration of the area of ​​the unit circle), which he gained from the interpolation (a term he introduced) of the integral for whole n . The infinity sign as a symbol for the infinite also comes from Wallis. The Arithmetica Infinitorum had a great influence on Isaac Newton , who studied the book in the winter of 1664/65, and also led to an exchange of letters with Fermat , who challenged English mathematicians with mathematical problems after the book was published.

In his algebra he also allowed complex solutions of equations. He was one of the first British mathematicians to use Descartes' methods of analytical geometry . Among other things, he applied them to the conic sections. In his Algebra, his last great work on which he worked for many years, there is also a section on infinite series, and it contains the first publications of some of Newton's results in this field, especially in the first edition. Wallis tried very hard to document Newton's priority in this area (especially since Newton did not publish anything himself at the time) and encouraged other colleagues in Great Britain to do the same. In his algebra, he built on the work of English mathematicians such as Oughtred, Harriot and John Pell. He also tried to show that Descartes was influenced by Harriot in algebra.

He wrote treatises on music theory and a book on phonetics (De loquela, first 1652), which saw many editions (6th edition 1765). Walli's studies of phonetics also led to methods of teaching deaf children, and he taught two deaf people in 1661/62, which he reported to the Royal Society. In this area he also adopted theories from Johann Konrad Ammann .

On the theory of movement and mechanics, he wrote a work Mechanica sive de motu tractatus geometricus in 1671 , in which he emphasized the strictly geometric basis of this teaching on a Galilean basis . It deals in particular with centers of gravity and impacts and represented a significant advance in the mathematization of mechanics in the 17th century. The book also had a strong influence on Isaac Newton , who went far beyond that with his book Principia (1687).