Cavalerius is a redirect to this article. For the moon crater named after Cavalieri, see Cavalerius (moon crater) . 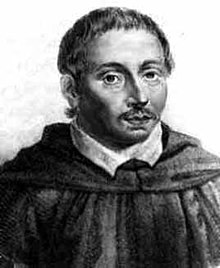 Bonaventure Francesco Cavalieri (* 1598 probably in Milan ; † December 3 or November 30, 1647 in Bologna ; with scholar name Cavalerius ) was an Italian Jesuit , mathematician and astronomer .

Bonaventura Cavalieri worked in the field of geometry and taught at the University of Bologna . At the same time he was the prior of a Jesuit monastery. His calculations of surfaces and volumes anticipate methods of calculus .

The Cavalierian principle states that two bodies have the same volume if all plane cuts have the same area, which are made parallel to a given basic plane and at the same intervals.

Stefano degli Angeli (1623–1697) was his pupil. He wanted Michelangelo Ricci and Evangelista Torricelli as editors of his posthumous writings. Torricelli died shortly before him and Ricci couldn't find time. They weren't published until 1919.