The title of this article is ambiguous. Further meanings are listed under Prior (disambiguation) . 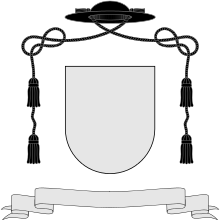 In several religious orders that do not know an abbot , the prior is the head of the monastery. His representative is the vicar or the subprior, for example with the Dominicans , Carmelites and Carthusians . In monasteries that have an abbot as head, the prior is his representative, for example among the Benedictines , Cistercians or Trappists . In these orders there are also monasteries that do not have the rank of an abbey and are directed by a prior. They are therefore referred to as priory or priory and can be dependent or independent (conventual prior) of an abbey. In the Middle Ages, the prioress of a dependent convent was also called "Magistra". Some orders of knights are divided into grand priors, which are headed by a grand prior.

The head of a Franciscan or Capuchin monastery is known as a Guardian .

There is also the office of prior in evangelical and ecumenical communities , e.g. For example, the Community Christ Brotherhood Selbitz , the Jesus Brotherhood (Community Gnadenthal), the Christusträger Brotherhood (Triefenstein Monastery), the Jesus Community Marburg or the Christ Meeting Movement that emerged from it and the Communauté de Taizé .

The head of a women's monastery was sometimes referred to as a priory in the regional dialect , for example in the Schleswig-Holstein ladies' monastery of St. Johannis Monastery in front of Schleswig , Uetersen Monastery and Preetz Monastery .

The respective rule of the order or the constitutions contain information on the choice of a prior and his or her powers and duties. This is what St. Albert , who underlies the Carmelite Order , that the prior should have his cell near the monastery gate, “so that he can be the first to meet everyone who comes there and then everything that has to be done at his discretion and at his command be done. "