A priory church ( French église prieurale , English priory church , Spanish iglesia prioral ) is a medieval church building that belonged to a priory - a monastery of lower rank than an abbey - which was organizationally dependent on a larger mother monastery - often far away . 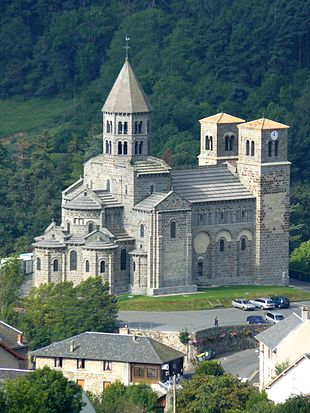 In the 11th and 12th centuries, the larger monasteries in Europe came into possession of lands in more distant regions through gifts, foundations or testamentary dispositions. This land had to be cultivated and administered - this could be done by tenants, but also by the monks themselves - true to the Benedictine principle of ora et labora . In some cases the foundations were linked to the condition that a church had to be built on the donated land, in which, after the death of the donor, prayers were made for the salvation of his soul.

When the number of monks in a mother monastery became too large, which was more common in the High Middle Ages, the establishment of a priory offered new space. Since many documents were lost over time, the name of the original mother monastery is no longer known in many cases.

Since not all monks - especially in later times - did physical labor themselves, more and more people settled in the vicinity of an abbey or a priory and its often extensive business operations, who carried out agricultural activities as serf farmers or as legally free craftsmen (Carpenters, blacksmiths, wheelwright, etc.) were active. In this way, smaller villages emerged in the immediate vicinity.

The income from agricultural production essentially served the self-sufficiency of the priory and the respective mother monastery. Caring for the sick and pilgrims was also an important task. It is not known whether any surpluses were allowed to be sold in markets, but in a time of declining monk numbers it is quite likely.

Another source of income for a priory was its role as a regional pilgrimage site. So to this day there are portraits of Mary or saints venerated as 'miraculous' in some former priory churches. This also explains the size of the church buildings, the capacity of which often exceeded 20 or 30 times that of the respective monastic community.

After the upheavals of the Church Reformation under Henry VIII in England and through secularization on the European continent, monasteries and thus abbeys and priories were dissolved; the farm buildings were used for other purposes or as quarries, the former priory churches were usually converted into parish churches. 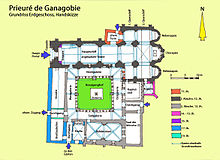 An architecturally uniform building type of a priory church does not exist; the churches were often three-aisled ( basilical ) and three apsidial and thus larger than the mostly single-nave parish churches, but smaller than their mother monasteries. In some regions of south-west France ( Saintonge , Angoumois , Périgord, etc.), however, a regional tradition of single-aisle church buildings has developed, so that the single-aisle structure cannot always be taken as an indication of a parish church.

A clear indication of the positive identification of a church as a former priory or collegiate church, however, is the presence of a second portal on the south side (see St-Pierre-aux-Liens (Varenne-l'Arconce) , St-Julien priory church in Chauriat , Thuret priory church , La Peyratte , Échebrune and others), which was formerly used as a separate entrance from the cloister area, reserved only for monks and conventuals . This portal was in many cases later, i. H. after the dissolution of the priory, walled up (e.g. St-Hilaire de Melle ). The presence of a bell tower instead of a simple bell gable can also be interpreted in this regard.

The cloister area of ​​a priory, usually located on the south side, usually had a simple cloister , which sometimes consisted of just one wing. Most of these cloisters disappeared after the monasteries were dissolved. The same applies to the building parts attached to the cloister ( dormitory , refectory ) and the outbuildings (farm buildings, stables, workshops, etc.). There was usually no scriptorium in the priories, because the often artful copying of books remained the task and source of income for the abbeys. Even a chapter house did not originally exist in the priories, since the important decisions on secular financing and construction issues were made in the respective mother monastery.

Many abbey churches were demolished during the French Revolution ; however, most of the priory churches were converted to parish churches and were thus preserved for posterity. Their architecture is mostly mature; in some cases they are even considered a scaled-down image of the mother monastery (e.g. Paray-le-Monial / Abbey of Cluny ). In addition, some priory churches sometimes have tympana , friezes etc. or contain other art treasures such as frescoes , rood screens or important portraits of Mary and figures of saints . 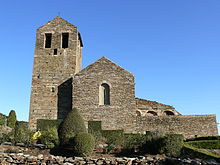