This article explains the frieze of architecture; for other meanings, see Fries (disambiguation) .

In architecture, a linear, mostly horizontal style element is referred to as a frieze . It is a narrow strip that is used to outline, delimit, structure and decorate parts of a building. The frieze can be smooth or three-dimensional, painted or composed of individual components. Some consist of several narrow frieze bands or their ornaments .

Friezes serve to structure a facade and in this respect are similar to cornices . The difference to the strip-like cornices lies in the repetition of a pattern, the rapport - a form of jewelry in a constant rhythm. Cornices are sometimes accompanied by or combined with friezes.

On the Sardinian giant tombs of the Bronze Age with ashlar facades, there is often a strange, carefully hewn stone block near the entrance, which is known as a -Zalm frieze or -Zahnstele- ( Biristeddi , Madau ). Since the teeth spare three spaces, a comparison with the three holes on the Nuragic Domus de Janas suggests that it is not the teeth that matter, but the spaces. The puzzle of the reconstruction of the ashlar facade is unsolved, as none of the tooth friezes was found in its original position.

The frieze in ancient architecture 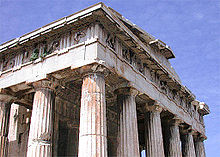 Stone entablature at the Temple of Hephaestus , from top to bottom: Geison , frieze with triglyphs , architrave

Roman entablature frieze at the Temple of Jupiter, Split, around 300 AD.

In connection with the Greek architecture of antiquity and its column orders , frieze is understood in particular to mean the part of an entablature lying on the architrave (epistyle) and under the geison . The Doric order frieze consists of an alternating sequence of metope and triglyph , which is why it is also known as a triglyph frieze . Here it is initially determined constructively. In the Ionic order, on the other hand, the frieze consists of a smooth square layer with a relief band, but can also be omitted entirely. The frieze occurs in the same way in Roman architecture .

Friezes designed as a relief are not limited to the entablature as a building sculpture . They can be on the architrave or on the cella walls , but they can also cover entire wall areas, such as on the Pergamon Altar .

In the Middle Ages , new frieze shapes were created with mostly abstract and spatial ornaments. These were, for example, the diamond frieze, the diamond frieze, the cube frieze or the chessboard frieze. The arched frieze is particularly common in the Romanesque period , although the cross-arched frieze is also used in Islamic architecture. The Gothic brought forth tracery friezes with foliage motifs and leaf motifs. There was also the pointed arch frieze, which is called the lily frieze, when the consoles of the pointed arches have a lily-shaped ending.

During the Renaissance , antique friezes were taken up again and varied. This also applies to the subsequent stylistic epochs of Baroque and Classicism . In the historicism of the 19th century, the friezes of all previous epochs were used, which means that in German-speaking countries there are diverse frieze shapes on the facades of Wilhelminian-style buildings. In the 20th century, Art Nouveau friezes were found, but they only lost their importance in modern architecture .

Structure of the friezes according to the predominant ornament

Friezes are named after the dominant ornament . A distinction is also made between the floral or abstract ornamental frieze and the figure frieze . In contrast, the term picture frieze stands for building sculptures of (Greek) architecture of antiquity. Significant and common frieze shapes are presented in art historical literature in the form of picture panels, although the terminology does not always match completely.

Frieze in the fine arts

In the visual arts at the end of the 19th century, which broke away from the naturalistic tradition , picture cycles and decorative friezes played an important role, often only in theory, and sometimes also in practical implementation. Well-known examples are the Beethoven frieze painted in 1901 by Gustav Klimt or the life frieze by Edvard Munch .