This article deals with facades in architecture. For other meanings, see facade (disambiguation) . 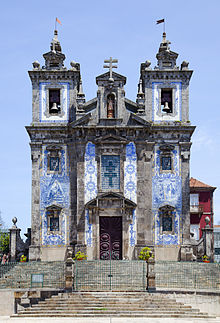 Lavishly decorated with azulejos facade of the Church of San Ildefonso , Porto (Portugal)

The facade (from French : façade , from Italian : facciata , originally from Latin : facies : face / face) is a designed , often representative part of the visible shell ( building shell or outer skin ) of a building .

In architectural history , the term refers to the main viewing side of a building, i.e. the building front . As a rule, this was the side facing the public urban space ( street , square ). The other sides of the building were often made simpler. In the case of churches , for example, the west facade , also known as the umbrella facade in England, was usually the most elaborately designed. Particularly in the case of free-standing structures, however, several or all sides of the building could be designed as a designed facade (e.g. La Rotonda ). They are usually differentiated according to cardinal points. The individual parts of a facade, such as windows or pillars , are called facade elements . 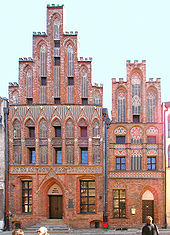 In the 20th and 21st centuries, the term facade is also used for less representative and complex building views. It no longer necessarily only describes a certain view , but the essential principle of the visible building envelope .

The term is often used synonymously with exterior wall . However, a light, curtained glass facade is not a wall and an unplastered wall would usually only be called a facade if there are at least some wall openings or design elements indicate that the wall should permanently serve as a visible surface of the building. A facade should therefore not only be a building envelope , but also a view . On the other hand, the functional component that separates the exterior from the interior is referred to as the exterior wall .

Glare facades on the town square of Tittmoning , Upper Bavaria : In the center of the picture you can see that the facades facing the square extend in the manner of an attic over the verge of the roof.

Glare facades were and are criticized in particular by representatives of the modern age . If the term “glare facade” is used in a derogatory way, it is supposed to denounce , for example, the backdrop and the mask character of architecture.

Today, LEDs (e.g. at the Uniqa Tower in Vienna or the Bayer skyscraper in Leverkusen), lamps (e.g. at the Park Kolonnaden in Berlin and at the Kunsthaus Graz ) or screens ( Times Square in New York) interactive light and media sequences recorded. This makes the facade look extremely dynamic. See also: outdoor advertising . 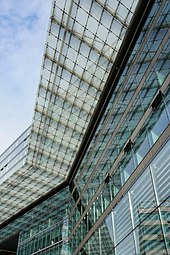 The structural design of this component is a complex object in structural engineering . There are a variety of types of construction.

The largest facade test rig in Europe has been in a part of the Lucerne University of Applied Sciences since 2008 . The 2.5 meter deep test chamber with an 8 x 12 m opening is used to check air permeability , tightness against driving rain and resistance to wind load .

The facade is an important theme in architecture. From Vitruvius to contemporary architects, the design of the facade plays an outstanding role. With the modern age of architecture, attempts were also made to deprive the facade of the character of the “separating” or “mask-like” character between outside and inside. A wide variety of architects hardly designed the interior and the facade so much. These include individual architects from the Bauhaus and especially Hans Scharoun (1893–1972), who tried to design the facade as a pure expression of the interior. In 1987 Jean Nouvel achieved a milestone in contemporary facade architecture with the Institut du monde arabe . The gallery shows some outstanding examples of modernist facades.

Depending on the susceptibility of the material used to discoloration and dirt adhesion, facades have to be cleaned at very different intervals. Various methods can be used for this:

To clean high-rise facades, workers usually use a facade lift to lower them from the roof. The supporting structure of the elevator can often be moved on rails that are laid along the edge of the roof.

Replica of a facade at the X. World Championships of the CTIF 1993 in Berlin

For the discipline of hook ladder climbing in fire fighting sports , a facade is reproduced using scaffolding. This replica is at least 13.12 m high and has three floors. The windows on the three floors are the same size. The window sill on the top floor is 10.85 m above the floor. In fire brigade competitions, the athlete has to reach the third floor as quickly as possible after a run-up and ascent with a hook ladder .