Phase diagram of carbon dioxide (not to scale), P t is the triple point and P c is the critical point .

Dry ice is solid carbon dioxide (CO 2 ) and does not melt at an air pressure of approx. 1013 mbar (1 atmosphere), but instead changes directly into gaseous carbon dioxide ( sublimated ). Under terrestrial pressure conditions, dry ice is / is not warmer than −78.4 degrees Celsius, the density is approximately 1.56 g / cm 3 . Dry ice is white and odorless. If you inhale the resulting vapors, it “tingles” because carbonic acid is formed on contact with the water in the mucous membranes.

Dry ice does not occur naturally on Earth, but in the CO 2 -rich atmosphere of Mars it freezes in winter at higher latitudes and forms the well-known polar ice caps. Some meteoroids also contain large amounts of it.

Adrien Thilorier (1835) is considered the discoverer .

The Mohs hardness of dry ice is 1 to 3 depending on the pressure used during manufacture.

Small amounts of dry ice can be created by turning a CO 2 bottle upside down and turning it on. The leaking liquid CO 2 evaporates for the most part immediately and cools down so much that part of it freezes as CO 2 snow. CO 2 extinguishers also work according to this principle , which - in addition to displacing the oxygen in the air - extract heat from the fire and cool the burning substances below the flash point .

Dry ice is mainly used as a coolant.

Coolant
In chemical synthesis for cooling reaction mixtures, usually as a cold mixture in conjunction with a solvent for more efficient heat exchange; or as a source of CO 2 as a synthesis component.
In motorsport , dry ice is used to cool the engines. Before the race, fans are fitted with dry ice. If the frozen carbon dioxide gets into the engine compartment, it is safe for the machine as dry ice sublimates.
In electronics, dry ice is used for cooling when overclocking . As a non-conductor , it is harmless in direct use there.
In freezing mixtures for cooling down to −78 ° C
Sealing of pipelines
A plug is created in pipelines by cooling, which temporarily closes them. In this way, work can be carried out without laboriously emptying pipes. Alternatively, cryogenic liquefied nitrogen (−196 ° C) is used.
Put
when joining hard metal sleeves on steel shafts, because steel shrinks more than hard metal at low temperatures. At room temperature, a compression of the two components forms, which was previously carried out at z. B. 20 ° C is set.
cleaning
Fine dry ice granulate is blown onto the surface to be cleaned at high speed. Dirt (grease, release agents, coatings) become hard and brittle due to the cold and flake off. A distinction is the dry ice blasting and the CO 2 - snow blasting .

Warts
To remove warts , some of them are frozen. The cold burn takes no account of the layers of tissue and spreads inward as a cone. The quantities applied are so small that only the top layers of the skin die.
Dentistry
For the sensitivity test of teeth. In vital, healthy teeth, the drop in temperature results in pain that does not last beyond the stimulus. If there is no pain sensation, further diagnostic measures must be taken. A negative sensitivity test can be a sign of pulp necrosis. In the case of pulpitis , there is an increased and lingering pain sensation that persists. The therapy of pulp necrosis and pulpitis is root canal treatment .
Stunning bees
Especially used by the queen bee during instrumental insemination .
Blood sucking insect attractants and vectors
When monitoring blood-sucking insects and vectors that use carbon dioxide in their host finding (e.g. mosquitoes ). The carbon dioxide is released from insulated containers with dry ice and lures the insects close to the intake openings of special traps.
Fighting rats
In the US , dry ice is approved for rat control . It is placed in the entrances of rat burrows. The animals suffocate from the released carbon dioxide, which flows into the buildings due to its density. 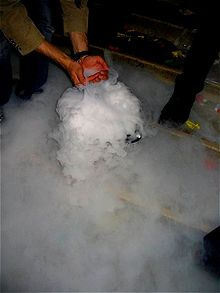 Gloves and safety glasses should be worn when handling dry ice. In the event of accidental skin contact, it sublimes on its surface and forms a thin protective gas layer that prevents direct contact with the skin ( Leidenfrost effect ). If dry ice still comes into firm contact with the skin for several seconds, the sublimation is interrupted and the ice remains stuck to the skin, similar to touching very cold metal objects. In order to prevent long-term damage to the skin and the underlying tissue layers, it must be removed (torn off) immediately, otherwise a cold burn occurs, in which the tissue dies in a few seconds . The damage spreads inwards in a cone.

When stored in closed rooms, the resulting carbon dioxide gas displaces the air on the floor due to its higher density. With sublimation, the gas expands to 760 times its original volume, which is why even small amounts of dry ice can completely fill a room with gas. In concentrations above 5%, it has a suffocating effect even if there is still sufficient oxygen in the breath (reduction of the reflex breathing stimulus until breathing stops). A dangerous gas pressure can build up in closed containers.

Commercially available dry ice for industrial use may contain impurities and should therefore not be used to cool food (beverages). Swallowing dry ice is life-threatening due to the risk of suffocation and cold burns.

On February 28, 2020, three people died at a party in Russia - one of the organizers had put dry ice in the swimming pool to generate show effects. The three people, including the organizer, were swimming in the pool at the time and choked on the gaseous carbon dioxide that formed.