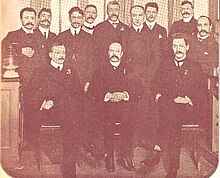 Arnold Frederik Holleman (born August 28, 1859 in Oisterwijk , † August 11, 1953 in Bloemendaal ) was a Dutch chemist and professor of chemistry in Groningen and Amsterdam .

Holleman, whose father is a factory for madder had pigments, studied chemistry in Leiden, Heidelberg and Munich, was established in 1887 with Antoine Paul Nicolas Franchimont in Leiden doctorate (PhD Onderzoekingen over het zoogenaamde B nitrocymol ) and in 1887 assistant to Jacobus Henricus van ' t Hoff in Amsterdam. In 1889 he became director of the agricultural laboratory in Groningen and in 1893 professor of chemistry at the University of Groningen . In 1905 he became Professor of Organic Chemistry at the University of Amsterdam . In 1924 he retired as a university professor, but remained scientifically active.

Arnold F. Holleman's areas of work were structural clarifications, especially those of pop acid and fulminates , substitution reactions, especially with benzene , as well as work on artificial fertilization .

Holleman was the founding author of the textbook " Holleman-Wiberg: Textbook of Inorganic Chemistry ", which was later continued by Egon Wiberg and, after his death, by his son Nils Wiberg . The Holleman-Wiberg has been a standard work in German chemical textbook literature for decades and has over a hundred editions. It has also been translated into many other languages. The first Dutch edition appeared in 1898 ( Leerboek der inorganic chemie , Groningen: Wolters). In addition to his textbook on inorganic chemistry, his textbook on organic chemistry (which first appeared in Dutch in 1896 as Leerboek of organic chemistry (Groningen: Wolters) and was edited by JP Wibaut in its 17th edition in 1955) was also widely used.

He was a corresponding member of the Académie des sciences and a member of the Royal Netherlands Academy of Sciences (1903), whose natural science department he headed from 1919 to 1926. Holleman has received honorary degrees from St. Andrews and Leeds , among others . In 1925 he became an honorary member of the Dutch Chemical Association (Nederlandse Chemische Vereniging). He was chairman of the international commission for organic chemical nomenclature. From 1928 to 1939 he was secretary of the Hollandsche Maatschappij der Wetenschappen . He was an honorary member of the Royal Society of Edinburgh and the Spanish Chemical Society. He received the Nicolas Leblanc Medal from the French Chemical Society.

The Holleman Prize (Hollemanprijs) of the Royal Netherlands Academy of Sciences is named after him. Prize winners were: