Louis XIV and Colbert attend the founding of the Académie (1666) 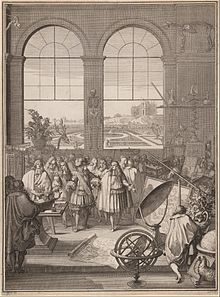 The Académie des sciences owes its existence to Jean-Baptiste Colbert's plan to create an institution dedicated exclusively to research. It found its members in various scientific circles that gathered around a patron or a learned person in the 17th century . Colbert selected a small group that met on December 22, 1666 in the king's library, which had recently been established in the rue Vivienne, and which from now on met for working sessions every two weeks. The first 30 years of the academy's existence were relatively informal, as the new institute had not yet given itself a statute.

On January 20, 1699, King Louis XIV gave the society its first set of regulations. The academy received the title of Académie royale and was located in the Louvre . Consisting of 70 members, it contributed to the development of knowledge with its publications in the 18th century and, with its proximity to power, also played a political role. One of the most important work was, for example, the measurement of the earth , for which the academy equipped two large expeditions to Peru and Lapland between 1735 and 1740 .

On August 8, 1793, all academies were banned by the National Convention .

Two years later, on August 22, 1795, a national scientific institute was set up, made up of the old literary academies of natural sciences and humanities. The first class of the institute (physics and mathematics) was the largest with 66 of 144 members.

In 1805 the academy was housed in the former Collège des quatre nations . In 1816 the Académie des Sciences regained its autonomy when it joined the Institut de France . The patron of the academy is the head of state.

In 1835, under the influence of François Arago, the Academy's conference reports were created ( Comptes rendus de l'Académie des sciences ), which became a primary means of disseminating the scientific work in France and abroad.

Since the beginning of the 20th century, the academy has experienced a decline in activity and influence. Given the accelerated development of scientific research in France, the Academy had to reform its structures and tasks in order to maintain its reputation. The first step in these reforms was carried out with the decree of May 2, 2002 (Journal Officiel n ° 104 du May 4, 2002), which allowed the election of 26 new members. The second step was the decree of January 31, 2003 (Journal officiel n ° 28 du 2 février 2003).

Female members were only admitted almost three centuries after it was founded, in 1962 (as full members only in 1979). So were Marie Curie and Irène Joliot-Curie , despite their Nobel Prizes rejected by the Academy.

The archives of the Académie des Sciences

The Académie des Sciences has always had the task of preserving its memory. It was not until the 1880s, however, that the collections of which the Academy is proud today were constituted - and reconstituted for the past. The collections consist of:

→ Main article : List of members of the Académie des sciences