The title of this article is ambiguous. Further meanings are listed under Jean-Baptiste Colbert (disambiguation) . 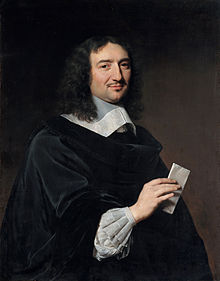 Jean-Baptiste Colbert , Marquis de Seignelay (born August 29, 1619 in Reims , † September 6, 1683 in Paris ) was a French statesman and the founder of mercantilism (Colbertism). It can be counted as part of the pre-classical economy . He was a successful finance minister under the "Sun King" Louis XIV . He reorganized the state budget to cover the very high expenditures, especially for the king himself, the courtto finance the military and its campaigns. Colbert created the basis of French economic and colonial policy . He was married to Marie Charron de Ménars.

Colbert came from the Reims cloth merchant family Colbert . His father was Nicolas Colbert, Seigneur de Vandière, and his mother Mara, born. Pussort, Seigneurs de Cernay . He gained his first financial policy experience under Cardinal Jules Mazarin (1602–1661) as his private asset manager. Mazarin also recommended him to King Louis XIV, who entrusted Colbert with increasingly demanding financial policy tasks. Mazarin died in March 1661 and Nicolas Fouquet , the host of the famous festival at Vaux-le-Vicomte Castle in August 1661, had become too powerful for Louis XIV and, organized by Colbert, was arrested by d'Artagnan on September 5, 1661 . The position of Surintendant des Finances was abolished and Colbert Intendant des finances .

Jean-Baptiste Colbert increasingly took over the government (only the king above him and the army were outside of his responsibility): "Minister" for building (Bâtiments du Roi, 1664), finance, trade, transport (Contrôleur général des finances, 1665), Marine, the Colonies (Secrétaire d'État de la Marine, 1669) and for Arts and Science (State Secretary of the Royal Household, Secrétaire d'État de la Maison du roi, 1669). In 1664 he founded the French East India Company with a base in Lorient and the French West India Company with Le Havre as its home port. He was also involved in the establishment and reorganization of the Nordic Company, the Levant Company and the Senegal Company . In 1666 he founded the scientific Académie royale des sciences . He sponsored numerous scientists; the historian Étienne Baluze became his librarian. In 1674 he founded the Caisse des Emprunts as a deposit bank ; However, this was closed again in 1709 due to insolvency.

He saw the most important source of national wealth in an active balance of foreign trade . By manufactories promoted and founded, he tried to avoid costly imports the country. He brought foreign skilled workers into the country in order to be able to manufacture the best products of other countries in France. He also saw to it that export tariffs were dismantled and the country roads were expanded into permanent roads . With detailed catalogs with production regulations, he tried to improve the quality of the goods produced in France. Colbert also dealt with classic tax policy to increase government revenues and reduce the downright chronic debts of the ancien régime . He reformed the state accounting system, thereby simplifying financial management. Overall, he decreased direct taxes and increased indirect taxes. However, his success in this area was limited.

Colbert's tomb in the parish church of Saint-Eustache in Paris

For the administration he put in each district superintendent one. In order to develop the raw materials of the colonies, he had the war fleet strengthened and is thus considered the real creator of French naval power. The Code Noir , a regulation for dealing with black slaves, also goes back to Colbert.

Colbert's last words were allegedly related to Ludwig: "If I had done as much for God as I did for this man, I would have been saved ten times over." He died on September 6, 1683 in Paris.

His eldest son of the same name succeeded him as State Secretary for the Royal House and the Navy.