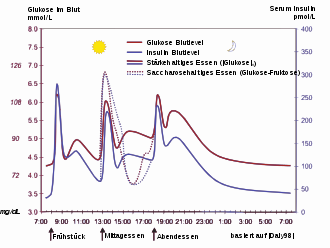 The picture shows the fluctuations in the blood sugar level (red) and the blood sugar-controlling hormone insulin (blue) in healthy people over the course of the day with three meals. The influence of a sugary (dashed) versus a starchy (solid line) meal is also shown.

Under blood sugar is generally understood as the amount of glucose in the blood . Glucose is an important source of energy for the body. The brain , the red blood cells and the kidney medulla are dependent on glucose for energy production, all other body cells obtain the energy primarily in the fat metabolism . Glucose is able to cross the blood-brain barrier and thus supplies the brain.

A low blood sugar may reduce the brain function that cause seizures, increased adrenaline and shaky hands and sweats. In pronounced form, the hypoglycaemia leads to shock . It is typically found in the very rare insulinoma , but in some cases also as an early symptom of type 2 diabetes, rarely even without further illnesses after a meal with rapidly absorbable carbohydrates . It is a common complication of some drugs in the treatment of diabetes mellitus.

Blood sugar is measured from a blood sample , usually from capillary blood . From the point of view of measurement accuracy, a distinction must be made between measurements by the patient himself with the help of blood glucose meters and higher-quality measurements in the laboratory.

As a unit in most countries, the SI-compliant (will International System of Units ) Unit mmol / L ( millimoles per liter). In the western part of Germany (and Berlin), as in the USA, Poland, France, Italy, Japan or Austria, the older (but also SI-compliant) unit mg / dl (milligrams per deciliter, synonymous with this is not) SI-compliant unit mg% ) is used.

For a while, measuring devices were in use that could display the result either in mg / dl or in mmol / l. According to the Federal Institute for Drugs and Medical Devices , this led to mix-ups of the underlying unit of measurement in several cases, which resulted in incorrect dosing of the insulin . Therefore, convertible devices have been taken off the market since the fourth quarter of 2006. There was a similar problem in Switzerland . Conversion:

The blood sugar level can be determined very quickly and largely reliably with small blood sugar measuring devices, which are optionally available with units of measurement programmed by the manufacturer either in mmol / l or mg / dl, also on prescription.

In humans, the normal values ​​are:

However, the values ​​differ depending on the literature source and the test material (venous plasma, venous whole blood or capillary whole blood - see tables). Fasting blood sugar (NBZ) values> 5.5 mmol / l or> 99 mg / dl (according to other sources> 6.1 mmol / l or 110 mg / dl) indicate impaired glucose tolerance, fasting values> 125 mg / dl dl or> 6.9 mmol / l to diabetes mellitus . As a complication, significantly increased values ​​in the context of wound treatment lead to prolonged or impaired wound healing. If necessary, when diabetes mellitus is diagnosed, treatment with insulin to support wound healing is necessary .

Abbreviations in the table above

A blood sugar level that is too high is called hyperglycemia , and hypoglycemia that is too low . A special form of hemoglobin , HbA1c , is able to reproduce the blood sugar course over a maximum of three months and is therefore also called "blood sugar memory". Hemoglobin is the red blood pigment in the erythrocytes that carries oxygen. HbA1c is hemoglobin that has been non-enzymatically glycated due to an excessively high blood sugar concentration . The HbA1c provides information about the last three months, since the lifespan of the erythrocytes is 120 days.

There are essentially three measurement methods that have become established for self- monitoring blood glucose meters .

With the optical measurement, the blood in the test strip is drawn in via a capillary to an externally visible test field. Various chemical substances are stored there that react with the blood and change the color of the test field. This color change is recorded by the measuring device and determined from the duration and strength of the change in the blood sugar value.

With amperometric measurement, the blood in the test strip is sucked into a test field via a capillary . In the test field, the blood is in contact with glucose oxidase and various electrodes . The measuring device applies a defined electrical voltage (approx. 300–600 mV) to these electrodes and measures the current that flows over the electrodes over time . The device determines the blood sugar value from the measured current. The current is proportional to the glucose concentration of the liquid in the containment (sensor area of ​​the capillary).

These and other non-invasive methods are still being researched or are in clinical approval (particularly in the USA). A glucose-sensitive nanosensor was newly developed at the American Northeastern University in Boston, the nanoparticles of which are injected like a tattoo and which fluoresce when blood sugar levels are high. A method is being developed at Brown University that uses plasmon interferometry to measure the glucose content of saliva .

A market launch of non-invasive blood glucose measurement using spectroscopic measurement methods in the near-infrared (NIR) range with extracorporeal measuring devices has so far failed because the devices cannot detect tissue sugar, i.e. H. Determine glucose per volume of the body tissue irradiated and not the blood sugar per blood volume, because the measuring beam has to penetrate the body tissue for the measurement.

Determination of glucose in urine

It is also possible to measure the urinary glucose value. However, glucose can only be detected in the urine if the glucose concentration is greatly increased and has exceeded a certain value. This value depends on the so-called kidney threshold of the respective test person . However, this kidney threshold is very unreliable and easily disruptive. During pregnancy , for example, the kidney threshold can drop to below 120 mg / dl, and in healthy people it can be over 200 mg / dl. Even mild kidney disease can change the kidney threshold. Due to the relatively high reliability and good availability of the blood sugar measuring devices at the same high prices for the measuring strips, the determination of the urine sugar can be regarded as outdated.

Simplified representation of the signal cascade for glucagon or adrenaline for the breakdown of glycogen. Please refer to the text for details.

Simplified representation of the signal cascade for insulin to build up glycogen. Please refer to the text for details.

The blood sugar level is regulated by the interplay of two peptide hormones in the pancreas . This gland contains blood sugar sensor systems in its α and β cells , which respond as follows:

In addition, adrenaline activates glycogen phosphorylase in skeletal muscle cells. Elevated adenosine monophosphate levels in the liver and muscles also activate the enzyme, as does the release of calcium from the sarcoplasmic reticulum with subsequent binding to calmodulin .

Glycogen breakdown and build-up are strictly counter-regulated via the phosphorylation of the key enzymes glycogen phosphorylase (PYG) and glycogen synthase (GYS), so they never run simultaneously. In energy deficit situations, both enzymes are phosphorylated by kinases; this process stimulates phosphorylase but inhibits synthase. If there is an excess of glucose, the situation is reversed by the action of phosphatases : Loss of phosphate residues inactivates PYG, but activates GYS.

Both the glucagon and the insulin signal are amplified via signal cascades. Protein kinases are at the center of both signaling pathways: each kinase phosphorylates several molecules of a downstream kinase.