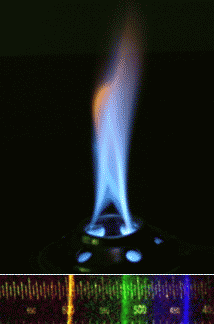 Spirit flame and its spectrogram

Spectroscopy refers to a group of physical methods including a radiation according to a particular property such as wavelength, energy, mass, etc. disassemble . The intensity distribution that occurs is called the spectrum .

Spectrometry is the quantitative measurement of spectra using a spectrometer . The recording method is called spectrography and the recording (graphical representation) itself is called the spectrogram , but is often referred to simply as "the spectrum" in technical jargon. Spectroscopes are used to visually observe optical spectra , as was the case for the first time with Isaac Newton , when he discovered the composition of white light from spectral colors in the 17th century .

The investigated radiations include the entire range of electromagnetic waves and mechanical waves such as sound and water waves , as well as particle beams z. B. from electrons , ions , atoms or molecules . Spectroscopy is used to study the properties of the radiation itself, to find out the properties of the radiation source (emission spectroscopy) or to investigate the properties of a transport medium located between the source and the spectrometer (absorption spectroscopy). In particular, spectrometry can be used to determine the type and concentration of emitting or absorbing substances.

If a spectrum shows sharp and separated intensity maxima, it is generally referred to as a line spectrum , otherwise as a continuous spectrum. Spectra from these two basic types are often mixed. The name line spectrum is explained by the fact that the first optical spectral apparatus received the light from an illuminated narrow slit, which was mapped to a certain location on the screen depending on the wavelength, so that a bright line was formed for each intensity maximum (see illustration) .

For example, the energy or wavelength spectrum of thermal radiation is of the continuous type with a broad maximum, from the position of which one can also read the temperature of the radiating body. In contrast, the light emitted or absorbed by atoms shows a spectrum of lines on which the chemical elements to which the atoms belong can be clearly identified ( spectral analysis according to Kirchhoff and Bunsen , 1859). The mass spectrum of a substance when examined with a mass spectrometer is also a line spectrum that shows the masses of the molecules present in the substance or, if applicable, of their fragments. Both types of line spectra show high sensitivity and are therefore routinely used in chemical analyzes to detect admixtures of foreign substances in the lowest concentration.

Spectrography is used in various forms, for example in medicine , in forensic chemistry , forensic toxicology and forensic biology . Spectroscopic observations of the line spectra of atoms and molecules gave decisive impulses for the development of atomic physics and quantum mechanics . The high precision with which many of their spectral lines can be measured allows u. a. the exact examination of natural laws , the determination of natural constants and the definition of the basic units meter and second . 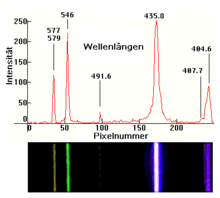 Spectrum of a low-pressure mercury vapor lamp, recorded with a 256-pixel line sensor or with a camera

A spectrum in the sense of this article is the distribution of a spectral power density over an energy scale ( frequency , wave number ) or a reciprocal energy scale. The relationship between the frequency of an electromagnetic wave and the energy of the light quanta is given by

with the Planck constant .

If the difference is positive, in this example it is emission, if the sign is negative, then it is absorption.

Structures in the spectrum indicate which amounts of energy a substance can absorb (absorb) or release (emit). These amounts correspond to energy differences in quantum mechanical states of the sample. The spectrum of a substance depends in particular on its concentrations, on selection rules and occupation numbers .

The investigation of light emission and absorption by molecules and atoms with the help of grating and prism spectrometers are the oldest spectroscopic methods. They are therefore also known as classical spectroscopy. Many of the fundamental investigations into the structure of the atom were only possible through the development and application of high-resolution grating and prism spectrometers.

The classification of the numerous spectroscopic methods and procedures is diverse and not always uniform in the literature. In general, a distinction is first made between methods of atomic and molecular spectroscopy . Atomic spectroscopy comprises spectroscopic methods that go back to emission, absorption or fluorescence processes in atoms and are used to determine chemical elements . The observed spectra are generally line spectra . The molecular spectroscopic methods, on the other hand, are based on the excitation and evaluation of rotational, vibrational and electronic states in molecules. Due to the superimposition of individual states, no line spectra but so-called band spectra are observed.

List of types and methods of spectroscopy in analytics

Memorial plaque for Kirchhoff in Heidelberg

The absorption lines in the solar spectrum were named after Josef Fraunhofer , who discovered them in 1813. But it wasn't until 1859 that Gustav Kirchhoff and Robert Bunsen were able to explain the nature of these lines as fingerprints of elements in the solar atmosphere. In the following further development of spectral analysis, u. a. William Huggins (USA) and Angelo Secchi (Vatican Observatory) the systematic investigation of star spectra and the temperature-dependent classification of stars.

Spectral analysis of the light from the sun and other stars showed that the celestial bodies consist of the same elements as the earth. However, helium was first identified by spectroscopy of sunlight. For decades, one of the solar spectral lines could not be assigned to any known substance, so that until it was proven that it was found on earth, it was assumed that an unknown element existed on the sun (Greek Helios ).

Other classic successes of astronomical spectral analysis are

The associated measuring instruments ("spectral apparatus ") for astro spectroscopy are: