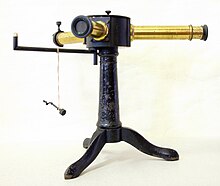 A spectrometer is a device for displaying a spectrum . In contrast to a spectroscope , it offers the possibility of measuring the spectra.

A spectrum is the intensity as a function of the wavelength , the frequency , the energy or - in the case of elementary particles, atoms or ions - the mass .
Because of the wave-particle dualism , these quantities are often equivalent .

In the case of optical spectrometers , the differentiation of the wavelengths of the radiation to be analyzed is often generated by directional deflection by means of refraction in a prism or by diffraction on a grating . It is also possible to determine the frequency components in an interferometer using a Fourier analysis ( FTIR spectrometer ).

In particle beams and mass spectrometry , an electric ( Stark effect ) and / or magnetic field (Lorentz force) and the Zeeman effect are used for analysis. Especially with heavy particles, the flight time and thus the speed of the particles can also be measured.

A simple optical spectrometer (see figure on the right) has only a few components:

In the case of an exit slit, S2 and the detector behind it are movable and sit on a scale (see goniometer ).