Refraction on a glass of water. Due to its shape, the glass looks like a cylinder lens and creates a reversed image.

The refractive also refraction , the change of the propagation direction of a wave of by a spatial change in index of refraction of the medium which passes through the shaft. The change in the refractive index leads to a change in the phase velocity of the wave. Refraction occurs in any type of wave that propagates in more than one dimension . Examples are light , sound waves , water waves or earthquake waves . 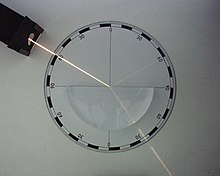 The refraction of light - or more generally: of electromagnetic waves - is most simply described by ray optics, which applies to structures that are large compared to the wavelength . At phase boundaries , a kink occurs in the beam due to refraction . The angle between the light beam and the perpendicular is larger on the side of the interface where the refractive index is smaller. The change in direction is greater, the greater the angle of incidence. Both are described by Snell's law of refraction . 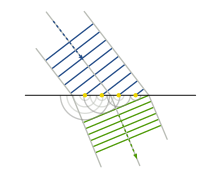 In addition to refraction, reflection usually also occurs at such a phase boundary , so that the incident light beam is split into two beams (one reflected and one refracted light beam). If these latter two rays form a right angle, the angle of incidence is the Brewster angle . However, if the refraction disappears completely and all the light is reflected, one speaks of total reflection . Total reflection occurs when the light beam comes from the optically denser medium and hits the boundary surface relatively flat. Then the angle of emergence of the refracted beam would be greater than 90 ° according to the law of refraction, which is geometrically nonsensical.

However, if the refractive index of the propagation medium changes continuously , e.g. B. because of spatially gradually changing substance concentrations, there is a continuous change in the speed of propagation and rays are curved, see for example astronomical refraction . In both cases, Fermat's principle applies , according to which rays take paths of extreme, usually minimal travel times or optical path lengths .

The dependence of the refraction on the wavelength (in the case of light, on the color) is called dispersion . This is the basis of the prism's ability to split light into its spectral components.

Anisotropic materials are birefringent , which means that the components of a wave are refracted differently (strongly) depending on their polarization .

In the technical optics refraction has numerous applications:

The refraction or refraction of sound is comparable to that of electromagnetic waves and describes the change in the direction of propagation of a sound wave in inhomogeneous, elastic media (gases, liquids and solids), in which the wave speed is a function of spatial coordinates. Sound waves are refracted in inhomogeneous media in the direction of the areas that have a lower sound speed. This effect can cause sound waves to travel relatively long distances in the atmosphere or in oceans .

At transitions between materials with different acoustic velocity are seismic waves refracted in a characteristic manner. Geophysicists therefore use the refraction of waves triggered by earthquakes to gain knowledge about the structure of the earth's interior .