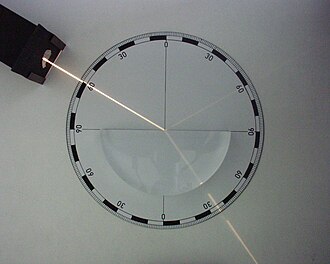 Refraction and reflection of a light beam when it enters glass. The beam reflected to the top right has the same angle to the perpendicular to the surface as the beam incident from the top left (60 ° in each case). The angle of the beam penetrating the glass (angle of refraction) is only 35 ° in accordance with the law of refraction.

The law of refraction is named after the Dutch astronomer and mathematician Willebrord van Roijen Snell , in some languages ​​after the Latinized form "Snellius", who was not the first to find it in 1621, but was the first to publish it. 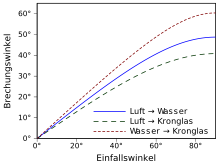 Angular dependence in the refraction for the media air, water and glass. Proportionality is a good approximation up to angles of around 50 ° .

It contains and the refractive indices of the respective media. Air has an index of refraction that is very close to . In the transition from air to glass, the law of refraction can therefore be approximated as:

The refractive index of an optical medium is generally dependent on the wavelength. This dispersion is included in the law of refraction. Different wavelengths are refracted to different degrees. This is used in dispersion prisms to separate the light into colors.

The law of refraction only applies to weakly absorbing media.

Refraction was described by Ptolemy in his work "Optics". Its linear law is only valid for small angles. The law of refraction was correctly stated for the first time in the 10th century by Ibn Sahl . The law was rediscovered but not published by Thomas Harriot in 1601 and by Willebrord van Roijen Snell around 1621 . While Harriot's discovery did not become public until 350 years later, Snellius' contribution was made known by Jacob Golius in 1632. Almost at the same time and presumably independently of Snellius, René Descartes published a similar connection in his Dioptrique in 1637 . His derivation was wrong, however, as he assumed a higher speed of light in the optically denser medium ( Pierre de Fermat first correctly derived it ).

A plane wave that propagates across an interface. Behind the interface, the medium has a higher refractive index and the wave has a shorter wavelength .

The refractive index of a medium indicates by how much the phase velocity and the wavelength are lower or shorter than in a vacuum:

From one medium to another, the wavelength changes by the factor ; in the transition to an optically denser medium shown on the right ( ), the wave is compressed. This compression leads to the distraction.

Schematic representation for the derivation of the law of refraction

In the 2nd picture the same process is shown schematically. A wavefront is drawn in at two special points between two parallel rays: The wavefront has just reached the interface on one ray (A) and has to cover the distance L 1 (= | BB '|) in medium 1 on the other ray until it touches the interface (at B '). For this, the second beam in medium 1 needs the time :

Analogously to this, the first ray traverses the distance L 2 (= | AA '|) in the medium 2 during this time . By converting and equating according to c , the distance is shorter than the above compression factor .

The same angles and occur between the interface and the two wavefronts as between the perpendicular and the incident or refracted rays. The opposite cathets of these angles are L 1 and L 2 , respectively , the hypotenuse of length | AB '| lying in the interface they have in common. Hence applies

By converting and equating to | AB '| results from it

which is equivalent to the law of refraction.

The law of refraction can also be deduced from Fermat's principle, which states that small changes in the path that light takes between two points P and Q do not change the optical path length . In the case of refraction, a systematic variation would be the displacement of the kink point within the interface, for example from A to B 'in the figure above. In the case of the displacement, which is so small compared to the distance to points P and Q that the angles do not change, the geometric path in medium 1 increases by L 1 , while in medium 2 L 2 is added. Because of the different phase velocities, the phase does not change overall.

For and sufficiently large is

and thus cannot be fulfilled by anything (real) . In these cases total reflection occurs, in which the light is completely reflected.

Equality applies to the critical angle of total reflection , i.e.

Total reflection is used, for example, in the erecting prisms of binoculars . 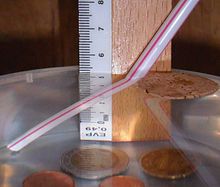 Due to the refraction on the surface, objects under water appear shortened in a vertical direction. Straight objects plunging in at an angle seem to have a kink on the surface.

If you look at objects under water from outside the water, they appear compressed in a vertical direction. The bottom of the vessel appears higher than in a picture of the same scene without water. This phenomenon is therefore also called optical enhancement . On a straight rod that dips into the water at an angle, you can see a kink on the surface of the water. Due to the different refractive indices of water and air, a different angle of refraction of the light rays coming from the rod into the eye occurs above and below the water surface at the interface with the glass. The human brain does not take these different angles of refraction into account and extends the rays in a straight line backwards, so that the rod appears flatter under water than the rod above water.

Mode conversion of an ultrasonic wave. An incident longitudinal wave ( "P" for English. Pressure wave , the pressure wave ) is partially as a shear wave ( ), and pressure wave ( reflected) and transmitted ( and ). The nomenclature is as follows: The first letter stands for the wave type of the causative wave (primary wave) and the second letter for the type of secondary waves that have arisen after the mode conversion.

The law of refraction also applies to mechanical waves , i.e. pressure or shear waves . In the context of acoustics and ultrasound technology, Snell's law of refraction is formulated without refractive indices, but with the help of the wave number . The following applies (see adjacent picture for the angle designations):

With the definition with , one obtains the law of refraction in the formulation with the phase velocities of the relevant wave types in the relevant medium and thus the same formulation as in optics (if the vacuum speed of light were reduced there). The law in acoustics is derived from the requirement that the continuity equation for mechanical stresses and displacements at the media boundary be fulfilled . The adjacent picture shows an incident longitudinal wave in a solid , which is partially reflected and transmitted at an interface with a second solid. In general, new wave types arise from the incident longitudinal wave (P wave) at the interface, so that two different wave types are reflected and transmitted: P waves and S waves ( shear wave ). Both types of waves propagate in the two media with different phase velocities, so they are also refracted at different angles. These angles can be calculated using the above law if the individual phase velocities and the angle of incidence of the primary wave are known. In the case of media without shear stress (liquids and gases), no shear waves occur, so that the incident P wave would only generate a reflected and a transmitted P wave.