This article explains the concept of plane angles in geometry; for further meanings, see angle (disambiguation) .

In geometry, an angle is a part of the plane that is delimited by two rays (half-straight lines) lying in the plane with a common starting point.

The physical quantity that describes the relative position of the rays to each other is referred to as the angular width or angular distance (angular distance) , usually also in shortening as the angle , if a differentiation from the geometric object is not necessary, for example in physics . The size of the angle is specified with a square measure .

The angular width can also be defined as a measure of a plane rotation .

To distinguish it from the solid angle , the angle defined here is also referred to as a plane angle .

In geometry, different approaches are possible for defining the angle as an object . Two types can be distinguished:

Representation as a pair of rays

The definition of two rays emanating from a point mentioned at the beginning is integrated into the applications such as the coordinate systems and their axes.

Representation as a half-line pair 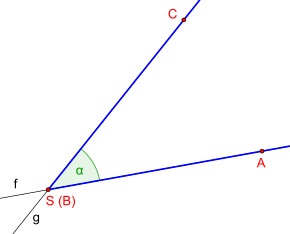 Representation as a half-line pair

The angle is a geometric structure consisting of two half-lines with the same origin.

Are , two straight lines , which at one point cut, the point divides the line , in half-lines. A half-straight from and (the legs ) together with (the vertex ) form an angle.

Using the “original” straight line, this representation enables, for example, observations over the various pairs of angles.

Representation as part of the plane 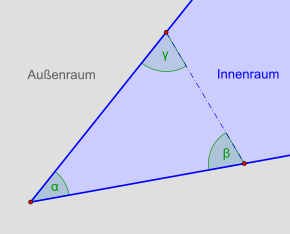 Representation as part of the plane

This definition is used in school lessons and emphasizes the "physical" nature of the structure and serves - by defining an interior and exterior space - as an introduction to triangular geometry : The triangle can be defined as the intersection of two angles with a common leg.

Ad hoc, in these three approaches, the angle is an undirected angle; only an additional marking of one of the two half-rays or half-straight lines as the “first” enables a directed angle to be specified.

One can also say that an angle is created by a rotation of a ray or a half-line in a plane around its starting point.

Since there are two different ways of rotating the beam, the direction of rotation must also be specified:

In mathematics , it is common to rotate counterclockwise - i.e. in the mathematically positive direction of rotation  . If the rotation is to be done the other way around, this should be stated explicitly.

In geodesy (surveying) the angle is counted clockwise, i.e. clockwise from 0  gon to 400 gon. Since there are by definition no negative angles in geodesy, the direction of rotation is positive. Analogous to the clock, here, too, counting is positive, clockwise, from 0 to 24 hours. All geodetic measuring instruments are turned to the right for direction or angle measurement.

The character »∠« ( HTML / , TeX , Unicode U + 2220) is available for the formula set , and »∡« (TeX , U + 2221 measured angle , no HTML entity) for the directional angle , both of which are in the Find Unicode Block Mathematical Operators . The lying angle symbol corresponds to the Anglo-American customs, in the European set of formulas a symbol is common that looks confusingly similar to the American "∢" U + 2222 for the solid angle . »∠« is also used for inclination and angularity ( positional tolerance , DIN EN ISO 1101). Especially for the right angle one uses »∟«, a dotted angle, in technology also a square, or . &ang;&#8736; \angle\measuredangle

The main article angular dimensions provides detailed information , conversions can be found under the individual dimensions.

Further forms of specifying an angle:

Two straight lines or lines that intersect at right angles are called orthogonal to each other . In a drawing, the right angle is represented by a quarter circle with a point or a square .

The full angle is a legal unit in metrology in Germany, Austria and Switzerland , it does not have a unit symbol.

Geometry has special terms for pairs of angles that have a special relationship to one another. The laws that apply to such angles help in the study of more complex geometric objects.

Two angles are called complement angles or complementary angles when they complement each other to form a right angle ( ).

If two straight lines intersect, a pair of neighboring angles is called a minor angle .

Side angles complement each other .

So they are supplement angles.

Vertex angle or opposite angle

The vertex angles are always the same.

The term vertex angle comes from the fact that the two angles are mapped onto one another by point reflection at the vertex.

Step angles at parallels are the same.

From the angular equality can be reversed closed on the parallelism of straight lines: If a pair of lines , by a further straight cut so that the cut angle on the same side of and on each respective sides of and are equal, so the lines are found and parallel.

Alternating angles at parallels are the same.

From the angular equality can be reversed closed on the parallelism of straight lines: If a pair of lines , by a further straight cut so that the cut angles on different sides of and different sides of or are equal, so the lines are found and parallel.

If a straight line intersects two other parallel straight lines and , the angles that lie on the same side of but on different sides of and are called neighboring or E angles .

Neighboring angles complement each other .

From integration of the angle to be reversed closed on the parallelism of straight lines: If a pair of lines , by a further straight cut so located that the angle of intersection, on the same side of , but in each case on different sides of and are, to 180 ° complement, the straight lines and are parallel.

The property that neighboring angles complement one another follows directly from the axiom of parallels in Euclidean geometry . The above-mentioned properties of step and alternating angles can be derived from the consideration of secondary and vertex angles of neighboring angles.

Angle with pairs of right-angled legs

Two angles, the legs of which are perpendicular to each other in pairs, are of the same size or complement each other . Compare the figures on the right.

Some angles can be constructed with a compass and ruler alone . These include the 90-degree, 60-degree, 72-degree and 54-degree angle, as well as all angles that result from doubling, halving, adding or subtracting (see below) these angles.

The angles can be constructed in decimal degrees as an approximate construction using the third theorem of rays in combination with straight lines.

More precisely, one constructs the perpendicular to an already given route .

Construction for a given intersection on the straight line 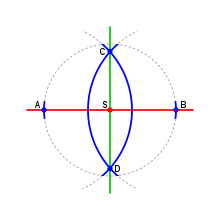 Construction for a given intersection on the straight line

For any point of intersection, there is no need to define symmetrical points on the straight line

A given line is halved by choosing the endpoints and the line as the center points of two equal arcs and connecting their two common points of intersection and with each other. The intersection point thus created provides the center of the route that is sought .

Construction of a 60 degree angle

Applying a 60 degree angle to a straight line through a point outside the straight line, also possible with the help of a so-called collapsing circle .

The figure on the right shows an alternative procedure which, in addition to the given point and the given straight line, only requires four circles with the same radius and the straight line for the solution. In the course of the construction, two points are always used to draw a circle. The distance between the two points is equal to the radius of the circle, so a so-called Euclidean or collapsing circle could also be used.

The somewhat more exotic construction of a 72 or 54 degree angle can be found in the regular pentagon . 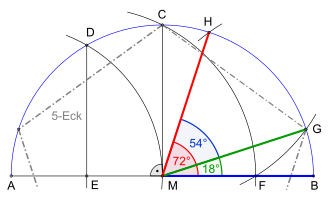 Addition and subtraction of angles 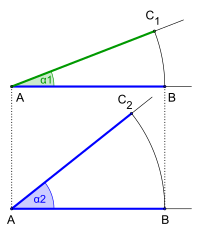 Every angle can be constructively, i.e. geometrically, added to and subtracted from another angle. In other words, you want to z. B. (see three pictures) to increase or decrease an angle by the size of another, first draw a circular arc of equal size for both angles around the vertices of the angles, which intersects or touches both legs of the respective angle.

First, the circular arc of the first angle over extended out so that it also, the second angle is sufficient space. Now take the angular width at the distance in the compass and use it to transfer it from the point of intersection to the extended arc. The result is the intersection. Finally, the new angle leg is drawn in.

An angle always consists of two legs that meet at the vertex. If you now draw two circles of the same size on each leg through the apex, the line between the points of intersection of the circle forms the bisector . Every point on the bisector is equidistant from the legs.

The first drawn circular arc about the vertex with an arbitrary radius, intersecting the side of the angle in and will now be either of the same (see Figure) or with a different circular aperture to the intersection points and respectively beaten an equal arc. Finally, from the apex , a half-line is drawn through the last intersection point and thus the bisector is obtained.

The general three-way division of the angle is not possible with Euclidean tools. However, there are (hand) drawing devices (e.g. tomahawk ) for this task. What is also possible, however, are approximation constructions with low angle errors.

The arbitrary division requires an aid with which an angle can be mapped proportionally on a line and vice versa, for example a template with an edge shaped as an Archimedean spiral or a quadratic rix of Hippias . This enables an angle division to be converted into a route division. There are applications of this in the construction of certain regular polygons that cannot be constructed with compasses and rulers alone, such as B. the elf .

be expressed. The application of one angle to another can be done by substituting the addition theorems

In addition, the cosine of the central angle of the 17-sided has the value:

from which its constructibility results.

When measuring angles, technical equipment is used to determine the angle at which two straight lines or two other directions are to one another.