A triangle (outdated also triangle , Latin: triangulum) is a polygon and a geometric figure . Within Euclidean geometry, it is the simplest figure in the plane , which is bounded by straight lines . Its boundary lines are called sides . In its interior, there are three clamp -angle , the so-called interior angles on. The vertices of these angles are called the corner points of the triangle. A generalization of the triangle concept to non-Euclidean geometries is also possible. In this case the boundary lines must be geodesic .

In trigonometry , a branch of mathematics , triangles play the essential role. See in particular triangle geometry .

Classification of the triangles:
From left to right: acute-angled, right-angled , obtuse-angled.
From top to bottom: irregular, isosceles , equilateral

According to side lengths

Acute and obtuse triangles are also grouped under the name oblique triangle .

Triangle with its corners , sides and angles as well as the circumference , inscribed circle and part of a circle in the usual form

The sum of the interior angles in a flat triangle is always 180 °.

These intuitively understandable properties of plane triangles follow from the axioms of Euclidean geometry .

Every triangle has a perimeter , that is, a circle that runs through its three corner points. The center of the circumference is the intersection of the three perpendiculars . These are the straight lines through the midpoints of the sides.

The bisectors of the three interior angles also intersect at a common point, namely in the center of the inscribed circle . This touches the three sides from the inside. The three circles that touch one side from the outside and the extensions of the other two sides are called circles of the triangle.

The three heights , i.e. the perpendiculars of the corner points on the opposite side, also intersect at a common point, the height intersection . With the help of the heights, the area of a triangle can be calculated (see triangle area ).

Another well-known circle on the triangle is the Feuerbach circle . It is also called the nine-point circle because it runs through the three side centers, the three base points of the heights and the three centers of the upper height sections. Its center, like the center of gravity, the center of the circumference and the intersection of the height, lies on Euler's straight line .

Calculation of any triangle

A triangle has three sides and three interior angles . If there are three pieces of information about the size of these sides or angles , the remaining sides or angles can be calculated from them, unless only the three angles are given.

Depending on which combination of known sides and / or angles is given in detail, the result is either unambiguous or ambiguous (see adjacent figure).

The congruence theorems provide three constellations that can always be solved clearly, symbolically denoted by SSS , SWS and WSW , where S stands for a known side and W for a known angle.

The SSW or WSS case, on the other hand, is only unambiguous if the known angle is opposite the larger of the two given sides (SsW case) - if it is opposite the smaller side (sSW case), there are usually two different triangles, the meet the initial conditions. However, this does not always have to be the case, as the special case with the aspect ratio 1: 2 and the angle 30 ° shows, in which there is nevertheless only one specific triangle if the angle to the longer side is 90 °. Finally, the purely computationally possible situation should be mentioned that no triangle at all fulfills the initial conditions, namely when the sine of the angle opposite the longer side results in a value> 1 (for real triangles, however, this case is naturally excluded).

The WWS or SWW case can be solved in two ways (as can be seen in the adjacent figure): Either you first calculate one of the two missing sides using the sine theorem and then continue to calculate as in the SSW case , or you determine What is much more convenient is to use the sum of angles in the triangle to find the third angle that is still missing and then proceed as in the WSW case .

If the largest of the three sides is smaller than the sum of the two other sides, then the triangle is uniquely determined (except for congruence). Otherwise there is no triangle with the given three sides. The interior angles of the triangle can be z. B. calculate with the cosine law.

The WWW case cannot be solved unambiguously at all for plane triangles, because in this case there are actually only two pieces of information that are independent of each other, whereas the size of the third angle always results from the size of the other two. Without a given side, the shape of the triangle we are looking for is given, but its size remains undetermined.

The most important tools for calculating any triangle are, in addition to the sum of angles in the triangle, the sine and cosine theorem , compared to which the other triangular theorems such as the projection theorem, the tangent theorem and the half-angle theorem only play a subordinate role.

The most computationally complex, but also the most powerful of the three tools is the cosine theorem , as it is the only one that can be used to calculate a first angle for a triangle without any angle specifications (and then use the simpler sine law and the sum of angles in the triangle to help you). Accordingly, in the context discussed here, the cosine law is only used at the beginning of the calculation of a triangle of the type SSS or SWS , while everything else is done more easily and quickly using the sine law and the sum of angles.

As can be seen below, the cosine law begins just like the Pythagorean theorem , and in fact it can be viewed as a special case of the cosine law:

If the angle enclosed by two given sides of a triangle becomes a right angle, its cosine becomes zero, and what is then left of the relevant cosine law is nothing more than another version of "Pythagoras".

If you only know its three sides of a triangle , and , its interior angles can be determined with the help of the arccosine function (arccos) as follows:

The sine law is available in three variants, which can be summarized as follows:

As you can see, the sine law is mathematically much less complicated: If you know one of the three fractions, you automatically know all the others. For this, however, at least one of the three interior angles must always be known and, if not, the cosine law must first be used (see above).

An equilateral triangle .
The following applies: and

Equilateral triangle with circumference and incircle﻿﻿

For an equilateral triangle with the side length :

For proof see web links below.

An isosceles triangle .
The following applies: and

A set square is a ruler in the shape of a right-angled isosceles triangle.

Right triangle with the right angle at point C.

The height of a right triangle shares the hypotenuse in two parts and so that the two sub-triangles with sides , , and , , in turn, are perpendicular. With knowledge of two of the six data ( , , , , and ) can be the missing four other values from those listed in the table below formulas to calculate.

Trigonometric functions in a right triangle

From the above, the following can be represented by reciprocating .

The inverse functions of the mentioned trigonometric functions are called arcsine , arccosine , arctangent etc. - their main application is accordingly to supply the corresponding angles for given sine, cosine or tangent values.

A triangle is called irregular if it fulfills these two conditions:

If one of the two conditions is met, the other is automatically met. 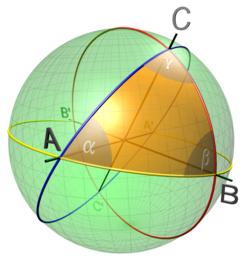 Triangles on a sphere whose three sides are parts of great circles are called spherical triangles or spherical triangles. Their side lengths are not specified in the dimension of a length (meters, centimeters, etc.), but as the corresponding angle in the center of the sphere.

A spherical triangle has a sum of angles greater than 180 °. The "excess" is called spherical excess and is usually referred to in formulas as:

The excess is directly related to the area of the triangle:

where means the radius of the sphere and the number of circles . 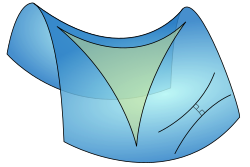 The non-Euclidean geometry - in which the axiom of parallels does not apply - also includes triangles on a saddle surface . While a sphere is convexly curved everywhere , saddle and other hyperbolic surfaces have both convex and concave curvature (their product, the measure of curvature, is negative ).

Correspondingly, the excess is also negative - i.e. H. the sum of the angles of a triangle on a saddle surface is less than 180 °. The congruence theorems make statements about the triangle sizes (side length, angle ), which are necessary to clearly define a triangle.

Sentences around the triangle

Triangle as a symbol

The triangle is used as a symbol, for example in theology, as an ideological symbol, as a mathematical symbol and also in signs.