The title of this article is ambiguous. Further meanings are listed under square (disambiguation) .

Square with side length a and diagonal d

In geometry , a square is a special polygon , namely a flat, convex and regular quadrilateral . It has four sides of equal length and four right angles . The square is a special case of the rectangle , the diamond , the parallelogram , the trapezoid and the dragon square . For the construction of a square, an indication is sufficient, e.g. B. the length of the side or the diagonal .

The following applies to the square:

The square can be characterized as

The square is a regular polygon that can be constructed with a compass and ruler .

Construction with a given side length 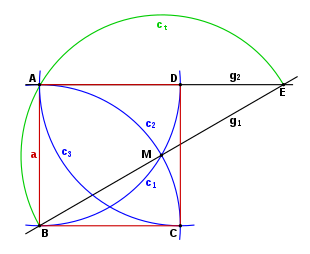 Construction with a given side, gets by with a single compass setting (radius = a)

Construction with a given diagonal

Construction for a given diagonal

The numbers below the figures indicate how many corners the regular polygons have, each of which meets at a point . The interior angles add up to 360 °.

In Euclidean geometry , the square is the two-dimensional special case of hypercube and cross polytope .

The term square is in the synthetic geometry of affine plane generalized by one of the equivalent statements that describe a square in the elementary geometry is used for the definition of the term. For example, for pre-Euclidean levels, the existence of these figures becomes an additional axiom .

In non-Euclidean geometries , squares are generally polygons with 4 sides of equal length and equal interior angles .

In spherical geometry , a square is a polygon whose sides are great circles that intersect at the same angle . In contrast to squares of planar geometry , the angles of a spherical square are larger than a right angle . Larger spherical squares have larger angles.

A Latin square is a square scheme with n rows and columns, each field being occupied by one of n different symbols, so that each symbol occurs exactly once in each row and in each column. The natural number n is called the order of the Latin square.

A magic square with edge length n is a square arrangement of the natural numbers 1, 2,…, n², in which the sums of the numbers of all rows, columns and the two diagonals are the same. This sum is known as the magic number of the magic square.

Simple , perfect squaring of the square of the lowest possible order (21)

The squaring of the square is the tiling of a given square with smaller squares whose side lengths have integer values. The following additional conditions make the task interesting and demanding:

The square and the circle have the same area .