A Latin square is a square scheme with rows and columns, with each field being occupied by one of different symbols, so that each symbol appears exactly once in each row and in each column. The natural number is called the order of the Latin square.

The numbers from to , or different letters or different colors are often used as symbols . The mathematician Leonhard Euler dealt intensively with such squares; he used the Latin alphabet as a set of symbols . The name Latin square goes back to it.

In the modern combinatorics and discrete mathematics are a symbol amount mainly the numbers up , more rarely the numbers to be used, and the scheme is as special - matrix considered.

Representation as a matrix

A Latin square of the order is a square matrix whose entries are all natural numbers from to , in such a way that each of these numbers appears exactly once in each row and in each column of the matrix. This property can be tested in a matrix (for example with a computer algebra system like Maple ) as follows: The following equations must be fulfilled for the entries in the matrix :

The OAR suggests a geometric interpretation for a Latin square: The number in a cell of the Latin square can be understood as the height of a cuboid that is to be built on this cell as a base. This turns the Latin square into a spatial bar chart - compare the illustration for the example below.

A related interpretation of the Latin square of the order can also be seen in the picture : If one only fills the cube at the top of each of the columns of the bar chart, then one obtains a three-dimensional picture of axially parallel unit cubes in a larger axially parallel cube with the edge length . The sub-cube with the grid coordinates is “filled” if and only if the Latin square belongs to the OAR. An arrangement of partial cubes in such a cube of edge length belongs to a Latin square of the order precisely when the large cube is opaque when viewed through the partial cube in the three axially parallel directions, i.e. appears completely filled when projected in one axial direction.

The triples of the OAR representation can be interpreted as spatial coordinates or as heights of columns on the Latin square. In this picture, for the sake of clarity, only the first and the last column (s = 1 and s = 4) of the Latin square of order 4 (red numbers on the base) are shown as columns. The cube at the top of these columns is highlighted in color.

The triple representations are

The numbers of Latin squares of the order form sequence A002860 in OEIS . There is no known formula for the sequence that is easy to calculate . The best known lower and upper bounds for large orders are still far apart. A classic estimate is:

The numbers of the structurally different Latin squares (i.e. the squares cannot be made identical by rotation, mirroring or permutation of the symbols) up to order 7 form the sequence A264603 in OEIS .

A Latin square is called reduced or normalized if the various symbols are in their "natural order" in the 1st line and in the 1st column . In the triple display with numbers as symbols, this means: for the first row and for the first column. The normalization of any Latin square can always be achieved by interchanging rows and columns. The 3rd order square in the examples below is normalized by swapping the 2nd with the third row, the 4th order square is already reduced.

The numbers of reduced Latin squares of the order form sequence A000315 in OEIS . The following applies to the number of all Latin squares

Latin squares of the order 3 or 4 in the matrix representation:

It is easy to give a Latin square for any given order : To do this, one distributes various symbols arbitrarily on the first row of the square. The following rows are now filled in successively by taking over the previous row shifted by one to the right. The rightmost symbol of the previous row would fall out of the square; instead, it is entered in the new row on the far left.

The example of order 3 is constructed in this way, in the example of order 4, instead of shifting to the right, every row was cyclically exchanged to the left . If you start with this construction, as in the example shown, with a sorted first line with the numbers , you always get a reduced Latin square, which can be interpreted as a link table of the remainder class group . To do this, the numbers entered must all be reduced by 1.

Two Latin squares and are called orthogonal if no two of the pairs match that result from writing the entries from and next to each other in a new square scheme . In matrix representation:

The Latin squares and combined here to form the matrix are orthogonal. In this case, the square represented by is called a Greco-Latin square . The numbers of pairs of orthogonal Latin squares of the order form sequence A072377 in OEIS .

The following sentence is important for use in geometry:

Let be a set of Latin squares, the order , with the property that two different Latin squares are always orthogonal to each other. Then contains at most elements.

According to its construction, a Greco-Latin square of the order n , if the pairs of numbers are bijectively recoded to successive natural numbers - e.g. B. - all line sums and row sums are the same, for example the square S can be the square

assign where every row and every column has the magic sum . 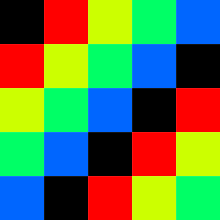 Link table of the cyclic group C 5 as a Latin square in color. The neutral element is black. Colored linking tables are used in the online math encyclopedia MathWorld , as are those in grayscale

The first image on the left shows the group's full linkage table :

In the middle matrix, the row and column headings, i.e. the group elements linked with "+", have been left out, so this matrix represents a Latin square with the set of symbols that is common for residual classes. If you add 1 to each entry, the result is a Latin square with the standard amount of symbols . This Latin square is normalized here because the group elements of the group for the link table were arranged in their "natural order" as a multiple of the generating element 1 and this group is cyclical .

It must be noted that there is generally no specific arrangement for the elements of a group or quasi-group: If the symmetrical group is based on elements, then a permutation that successively affects the rows and columns of the link table (including their row or column headings) is used, another valid link table of the same group from the original table (left); the Latin square assigned to the group (right) also changes.

Formally and more generally, the following applies: If the order in the matrix is a Latin square , then there is a quasi-group with elements that - with a suitable arrangement and numbering of their elements - the matrix has as the content of its link table. Just the Latin squares by a similar row and column permutation and a "renumbering" from arising, so for the true, can be regarded as a link tables of this quasi group.

From a complete list of pairwise orthogonal Latin squares of the order , a finite affine plane of the order can be constructed and vice versa. This is how it works:

Conversely, one can choose an affine coordinate system in a finite affine plane of order n and assign numbers as "combinatorial coordinates" to the points on the first axis, i.e. the ternary body elements via any bijection except for the archetype n of the origin O , so that

This gives you a unique pair of numbers for each point on the plane using the coordinate representation based on the point base . Each of the parallel sets except the two sets parallel to the axes defines a Latin square as described above and the squares determined in this way are orthogonal in pairs. Expressed by the ternary connection T - also determined by the list of orthogonal Latin squares - the straight lines then have the straight line equations:

For each there is a projective plane of order if and only if there are pairwise orthogonal Latin squares of order .

If you carry out the construction described here with an incomplete list of MOLS, you get an incidence structure with points on every straight line and sets of parallels, i.e. a so-called - network .

If a finite ternary field , then for each one becomes a quasi-group through the connection . With the same arrangement of the elements of for the multiplication tables, the Latin squares for two such combinations are always orthogonal to one another with different factors . A ternary body of the order always gives a complete list of pairwise orthogonal Latin squares.

The remainder class field is a ternary field. The contents of the multiplication tables for the quasi-group connections described above - since there is a body, the following applies here - are:

Each of these Latin squares then describes the incidence relation in one of the sets of parallels of the affine plane as shown in the previous section.

An agronomist wants to find out what concentration of fertilizer will maximize the amount of crops harvested. To do this, he divides his field into four by four individual areas. In each of the areas 16 is one of the four fertilizer concentrations , , or with used. However, the growing conditions in the 16 areas are inhomogeneous. In -direction the gradient increases, while in -direction the ground becomes deeper and deeper. In addition to the fertilizer concentration, the two block factors of slope and depth can also have an influence on the harvest yield, which must be taken into account in the test plan. If you have two block factors and one factor of interest, use a Latin square as a design. Each of the three factors has four factor levels, which in R generates the following test design with the function from the package :

There are many different transformations that can be applied to a Latin square to create a new Latin square:

The transformations mentioned in 4. are special cases of row or column permutations.

Important for the application and useful for counting the possible Latin squares of a fixed order are the sets of transformations described below, through which an equivalent class division is introduced on the set of all Latin squares of the order (with symbols off ).

Two Latin squares called parastroph each other when in the OAR as triples by a permutation emerge from one another, so if true. For example, the row number swaps with the column number and thus corresponds to the transposition in the matrix display. Each class of Latin square parastrophic to one another contains 1, 2, 3 or 6 different Latin squares, this is a consequence of the orbit formula . See also quasi-group # parastrophies .

Two Latin squares are called isotopic to each other if they emerge apart through a combination of row and column permutations and bijective renaming of the entries. The numbers of isotope classes of Latin squares of the order form sequence A040082 in OEIS . See also quasi-group # morphisms .

If one combines the equivalence relations parastrophy and isotopy, one arrives at a new equivalence class division, the division into the so-called main classes . Two Latin squares belong to the same main class if they can be converted into one another by a combination of parastrophy and isotope operations. Each main class contains 1, 2, 3 or 6 isotope classes. The numbers of the main classes of Latin squares of the order form sequence A003090 in OEIS .

Design of experiments and design theory