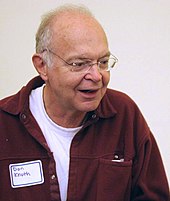 Donald Ervin "Don" Knuth [ kəˈnuːθ ] (born January 10, 1938 in Milwaukee , Wisconsin ) is an American computer scientist . He is a professor emeritus at Stanford University , author of the standard work The Art of Computer Programming and originator of the typesetting system TeX .

Knuth is the son of an accounting teacher who also ran a small print shop. He attended Milwaukee Lutheran High School and began studying physics at the Case Institute of Technology (now known as Case Western Reserve University ) in September 1956. However, he chose mathematics from his sophomore year for two reasons: First, he cashed in Problem of one of his math professors, which earned him a grade of 1.0, on the other hand he did not enjoy the physics internships.

He received a bachelor's and master's degree from Case Western Reserve University in 1960 . In 1963 he received his Ph.D. from the California Institute of Technology at Marshall Hall , where he became an assistant professor and an associate professor in 1966 and finally a professor. In 1968 he became a professor of computer science at Stanford University . From 1977 he was there Fletcher Jones Professor of Computer Science and from 1990 Professor of the Art of Computer Programming . He has been Professor Emeritus since 1993.

1960 to 1968 he was a consultant to the Burroughs Corporation , where he wrote early compilers , among other things . In 1968/69 he was Staff Mathematician in the Communication Research Division of the Institute for Defense Analyzes .

In 2006, Knuth learned that he had early-stage prostate cancer . He underwent an operation in December of that year, followed by light radiation therapy as a preventative measure. In his video autobiography, he called the prognosis pretty good .

He has been married to Nancy Jill Carter since 1961 and has a son and daughter.

As early as 1964 he gained international fame with his design proposal for an input / output system for the programming language Algol 60 . This system has been implemented as a component in most of the Algol 60 systems.

Especially for his multi-volume work The Art of Computer Programming , on which he is still working, he created computer programs with TeX and METAFONT that enable print-ready typesetting and that are particularly used in the mathematical-academic field.

He coined the term literate programming - the conception of writing computer programs with the same care as a literary text and of combining source text and software documentation .

In this sense, he published books in which the complete source text of TeX and METAFONT is printed in sections together with explanations of the design and the mode of operation of the algorithms (using these programs). The user manuals also published contain not only operating instructions for the users of these programs ("how do I inform TeX about possible word breakings?"), But also - in more technical language and smaller font - detailed information on the functionality ("how does the word breaker algorithm work?") . They also include the specification of these programs.

In addition to Knuth's efforts to create an appealing aesthetic appearance when setting the text, correctness is a top priority for him. Therefore, for every new error found in his books or programs, he gives a reward of a "hexadecimal dollar" worth $ 2.56 (100 hexadecimal corresponds to 256 decimal). Very few of these checks have been cashed to date. Since Knuth no longer considers checks to be safe, the coveted recognition checks have been issued as personal deposits at the fictitious bank of San Serriff since 2008 .

In 1974 he described and popularized the surreal numbers introduced by John Horton Conway in his book Surreal Numbers: How Two Ex-Students Turned on to Pure Mathematics and Found Total Happiness .

He combined his preference for beautifully printed texts with his theological interest (he is Evangelical Lutheran ) in the 3:16 project when, in 1985, building on a key passage in the Bible ( John 3:16 ), he extracted chapter 3 from every book of the Bible , Verse 16 and had his own English translation of it written by different artists and published these calligraphies with his thoughts on the verses.

On January 1, 1990, Knuth announced that from now on he would no longer use an email address in order to concentrate on his work.

Knuth has been retired since 1993 to devote himself exclusively to completing The Art of Computer Programming . Volume 4A, which deals with combinatorics , has been available since February 2011 . Volumes 4B and 4C are to follow, and he hopes to complete volume 5 (of seven planned) by 2025.

In autumn 1999 he held at MIT as part of a multi-year series of lectures of prominent scientists about "God and the computer" six lectures on links between computer science and religion from his personal point of view, and took part in a final panel discussion. Their transcripts were published in his book Things a computer scientist rarely talks about .

In recent times he has publicly criticized the granting of software patents in the USA several times and has been involved in the discussion about free access to publications in scientific journals.

In the course of his further research for The Art of Computer Programming, Knuth developed a new processor architecture with associated assembler and will publish this in a future edition of the first volume (the corresponding description is already available as a preliminary version). This 64-bit architecture ( MMIX ) supports a Unix- like operating system (called NNIX ), on which the TeX interpreter could then be executed . Thus The Art of Computer Programming and Computers and Typesetting in combination with free software would be a completely self-documenting system consisting of hardware and software.

The Art of Computer Programming also contains numerous detailed mathematical historical notes; he also wrote a few essays on the history of mathematics.

Knuth is also known for his scientific jokes , for example, he wrote an article The Complexity of Songs and designed the Potrzebie system of units , in which the thickness of the 26th MAD magazine serves as an elementary unit of length. It was also his first publication in MAD magazine (issue 33) in 1957.

He is a multiple honorary doctor; from 1980 to 2005 he was awarded 25 honorary doctorates, including from the ETH Zurich (2005) and the Eberhard Karls University of Tübingen (2001).

In addition, Knuth is the namesake of the Knuth Prize, which has been awarded annually since 1997 . The asteroid (21656) Knuth is named after him.