Main building of the academy in the north of Stockholm

The Royal Swedish Academy of Sciences ( Swedish Kungl. Vetenskapsakademien , an abbreviation of Kungliga Vetenskapsakademien ), KVA for short , is the highest scientific institution in Sweden . It has set itself the task of "promoting sciences, especially natural sciences and mathematics".

The Royal Swedish Academy of Sciences is based in the Swedish capital Stockholm and is known worldwide for the nomination of Nobel Prize winners in physics and chemistry as well as the award of the Alfred Nobel Memorial Prize for Economics , donated by the Swedish Reichsbank .

Together with the Institute of Physics , the Royal Swedish Academy of Sciences publishes the journal Physica Scripta on behalf of the science academies and physics societies of the Scandinavian countries . 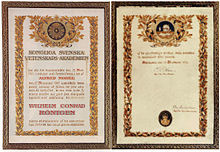 The academy ( Kongliga Svenska Vetenskaps-Akademien ) received its current structure and task around 1820 from Jöns Jakob Berzelius .

Permanent secretaries of the Academy

The academy is divided into ten classes:

The Academy has around 400 elected Swedish members (up to 175 of whom are under 65 years of age) and up to 175 foreign members.

The academy is also known for trying to make the sciences generally understandable for a larger group of people. To do this, she publishes several newspapers and magazines and organizes lectures.