The Royal Society (German Royal Society ) is a British learned society founded in 1660 for the care of science. It serves as the UK's National Academy of Sciences for the natural sciences . Its members are referred to as Fellows of the Royal Society ( FRS or FRS for short ). The Royal Society also awards scientific awards, in particular the Copley Medal , the Royal Medal and medals that are dedicated to specific subject areas. 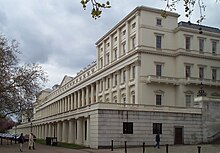 The name Royal Society first appeared in print in 1661. On July 15, 1662, Charles II granted the company its first royal charter . She appointed William Brouncker as their president and appointed the members of the council. The Society's council, however, was dissatisfied with her and obtained some changes. The second Royal Charter came into force on April 23, 1663. It set the name of the society as the Royal Society of London for Promoting Natural Knowledge , recognized Charles II as the founder and patron, and authorized it to carry a coat of arms . The second Royal Charter was read out on May 13, 1663 at a meeting of the members. It also gave the President and the Council the right to appoint suitable members to the Society during a two-month transition period without election. The members elected to the Royal Society on May 20 and June 22, 1663 in this way are referred to as "Original Fellows". Weekly meetings were suspended during the Great Plague of London . The last meeting took place on June 28, 1665, the next only on March 14, 1666.

The Royal Society's motto is “Nullius in Verba”, which translates as “according to nobody's words” (meaning “swear by nobody's words” - Nullius in verba iurare ). It stands for the declared will of society to establish a science that has only been proven experimentally and that is not satisfied with citing authorities. Although it seems self-evident today, at the time it was founded this was a clear break with the philosophy of science that had prevailed until then.

The journal Philosophical Transactions has been published since 1665 . From 1703 to 1727 Sir Isaac Newton presided over the Royal Society. Under his presidency, a separate building in London on the Strand was purchased. In 1780 the society was given premises in Somerset House (London / Strand). Although the members of the society were elected from the beginning, it was only since 1847 that the scientific merits of the potential member became the most important admission criterion. Women were not admitted to membership until 1945, the only exception being Queen Victoria .

In 1857 the Royal Society was housed in Burlington House London / Piccadilly. Today she uses the former building of the German embassy in London , No. 8 & No. 9 Carlton House Terrace, as its seat. The Royal Society has grown into a major academy of high-level scholars.

Fellow of the Royal Society

See also : List of "Original Fellows" of the Royal Society

The membership in the Royal Society's who have made a significant contribution to improving the scientific knowledge including mathematics, engineering and medicine, according to the Royal Society an honor that is awarded to people. So far there have been around 8,000 fellows in total. There are currently 1,675 living fellows. There are the following types of fellowships:

Fellows have the distinction added to their name, e.g. E.g .: Sir Alec Jeffreys FRS (Fellow of the Royal Society).

The Royal Society awards ten different medals, nine "prizes and awards" and nine "prize lectureships" every year, every two years or every three years, depending on the award. The recipients of the medals and prize lectureships are determined by the Physical Sciences Awards Committee and the Biological Sciences Awards Committee. These committees consist of members (" Fellows ") of the Royal Society.

The awards include the Rosalind Franklin Award, which has been presented exclusively to female winners since 2003 . It is endowed with £ 30,000 and honors outstanding achievements in the fields of science, technology, engineering and mathematics (STEM) . The Royal Society Milner Award named after Robin Milner is presented for outstanding achievements in the field of computer science . Prize winners are Xavier Leroy (2016), Thomas Henzinger (2015), Bernhard Schölkopf (2014), Serge Abiteboul (2013) and Gordon Plotkin (2012). 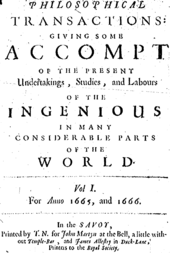 → Main article : List of Presidents of the Royal Society

Here is a list of some of the most important presidents:

In 2016 there were around 1,600 Fellows and foreign members of the Royal Society. A scientist from Great Britain or the Commonwealth can become a fellow. Each year up to 52 fellows and 10 external members are accepted by voting from a list of approximately 700 candidates proposed by the members.

In addition, there have been Honorary Fellows since 1996, for example Bill Bryson , who are not elected for academic achievements, but for other reasons. Previously there was the procedure of Statute 12 Arrangements .

In the 19th and 20th centuries, other royal societies were founded to promote individual sciences.

The Royal Societies also often perform the functions of professional associations , e.g. B. the Royal Society of British Organists.

The Royal Society of Literature was founded by George IV in 1820 .

Rest of the Commonwealth

Based on the British model, the Royal Society of Canada , based in Ottawa , was established in 1882 .

In New Zealand , the Royal Society of New Zealand is an umbrella organization for over 60 scientific and technological societies.