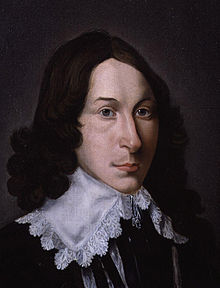 Evelyn's diaries are comparable to those of the other well-known diarist of the time, Samuel Pepys , and shed telling light on the art, culture and politics of his time (he witnessed the deaths of Charles I and Oliver Cromwell , the last great plague in London and of the great fire of 1666). Evelyn and Pepys corresponded regularly and much of their correspondence has been preserved. Evelyn's diaries and some of his other works are now in the British Library .

John Evelyn was born in Wotton. His family got rich mainly from producing gunpowder . He grew up in Lewes , Sussex . He received his education at Balliol College , Oxford and the Middle Temple . In London he witnessed important events such as the execution of Thomas Wentworth . He served a short time in the Royalist Army, then left the country to avoid the civil war. In 1647 he married Mary Browne, daughter of the British ambassador in Paris.

In 1652 Evelyn and his wife settled in Deptford in south east London. Evelyn bought her house, Sayes Court, from his father-in-law Sir Richard Browne in 1653 and soon began redesigning the gardens. In 1671 he met the woodworking master Grinling Gibbons (who rented a house on his property) and introduced him to King Charles II and his architect Sir Christopher Wren .

After the restoration, Evelyn's career took off. At the end of 1660 he was one of the first members of the Royal Society . The following year he wrote the Fumifugium ( The Inconveniencie of the Aer and Smoak of London Dissipated ), the first book on increasing air pollution in London.

Known for his knowledge of trees, he wrote his treatise Sylva, or Discourse on Forest Trees (1664) as a suggestion for landowners to plant trees to provide timber for the English fleet. Reprints appeared while he was still alive.

After the great fire of 1666, which he described in detail in his diaries, Evelyn put forward one of several plans (Wren drafted another) for the rebuilding of London which, like the others, was ignored by Charles II. Evelyn also designed pleasure gardens, such as B. that of Euston Hall . A versatile author, he wrote on subjects as diverse as theology, politics, horticulture, architecture, and culinary arts, and maintained close contacts with the full spectrum of his more significant contemporaries. When he died, his library contained 3,859 books and 822 brochures. Many were uniformly bound and carried his motto “ Omnia explorate; meliora retinete ”(Test everything and keep what is better, 1 Thessalonians 5:21).

His daughter Mary Evelyn (1665–1685) is sometimes referred to as the anonymous author of the book Mundus Muliebris: or, The Ladies Dressing Room Unlock'd and Her Toilette Spread. In burlesque. Together with the Fop-Dictionary, Compiled for the Use of the Fair Sex from 1690. It is a satirical fashion guide in verse about Francophile fashion and terminology, some credit John Evelyn himself, who apparently published it after his daughter's death.

In 1694 he went back to Wotton because his older brother had no sons as heirs to the family property there, but John already had a grandson. In 1698 he rented the property to Tsar Peter I (Russia) for three months , who caused great damage to the house and garden. The house no longer exists, but the park on Evelyn Street is now open to the public.