The Great Fire of London ( English Great Fire of London) was a conflagration that took place on Sunday, September 2nd . / September 12, 1666 greg. until Wednesday, September 5th jul. / September 15, 1666 greg. , destroyed four fifths of the City of London , including most of the medieval structures. The fire left about 100,000 people homeless, but according to official figures, only a few died. Just a few months earlier, London had been hit by another catastrophe , the last great plague . 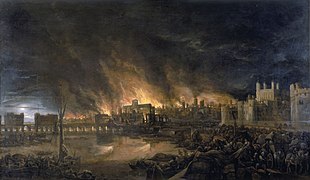 Origin and spread of fire

The summer of 1666 was hot and dry. From the end of August a warm south-westerly wind blew through London, feared by many as a plague. The danger of fire, on the other hand, was part of everyday life for Londoners - matches were only invented in 1820, fires were kindled with tinder or with glowing coals that were transported from house to house in buckets. Often the hearth fire was left to glow overnight for the sake of convenience; fires were not uncommon. The Great Fire broke out early Sunday morning September 2 in the bakery of a royal baker on Pudding Lane near the banks of the Thames . The baker Thomas Farynor (or Farrinor, Farryner or Faryner) had probably overlooked the embers in the oven when he locked his bakery that evening. The baker was awakened by the fire that night and was able to flee with his family; his maid became the first victim.

At that time it was customary to build each floor overhanging the one below ( frame construction ). This type of construction meant that the already narrow streets became narrower and narrower and the houses almost collided at the height of a second floor. So the fire leapt easily over streets and alleys; the strong wind and the easily inflammable building materials of the houses, which were mostly made of timber frame, allowed it to spread quickly.

In a matter of hours, the fire destroyed the wooden houses on Pudding Lane. The Star Inn, an inn on London Bridge , burned down and the fire spread to Thames Street . The raw materials in the warehouses there such as oil, hemp, flax, pitch, tar, ropes, hops and brandy further fueled the fire, which spread to the adjacent shipyards where wood and coal were stored. However, Sir Thomas Bludworth , the Mayor of London who was awakened, said, “Pish! A woman might piss it out! ”(For example:“ Pah, a woman could piss it out ”) and went back to bed.

Attempts to extinguish the fire with water from leather buckets were practically ineffective, also because the water pipes in London at that time were made of wood and thus often leaky and unreliable - now the fire also destroyed parts of the supply lines. As a rule, pumps were connected to certain points on the water pipes in the event of a fire - an early form of hydrant. In the chaos of the great fire, however, roads were torn open to access the water pipes, which caused the water pressure to drop to zero.

Samuel Pepys , who had seen the fire that night, drove to Whitehall Palace on Sunday morning to see Charles II . The court society had not yet heard of the fire. Pepys reported on the state of affairs and asked the King and his brother Jacob , the Duke of York, to order the demolition of rows of houses, as this was the only way to stop the fire.

Then Pepys rushed to the mayor, who was in charge of fire fighting on Canning (Cannon) Street and complained that his orders were not being followed. Homeowners whose properties did not appear to be threatened immediately refused to have their homes demolished. The fire now jumped from house to house faster than the rescuers could tear it down. On Sunday evening Pepys observed "one entire arch of fire from this to the other side of the bridge, and in a bow up the hill, for an arch of above a mile long: it made me weep to see it." Arch of fire from here to the other end of the bridge and in an arch up the hill, forming an arch of more than a mile: the sight made me cry. ”).

The fire from the south bank of the Thames

On Monday it became clear that all that remained was to flee; the streets were clogged with wagons and people with their belongings, the river full of boats. The fire skipped Cornhill and engulfed the commercial center of London, the Royal Exchange , where this branch of the fire merged with an eastern and a southern one and destroyed Cheapside. Tuesday was the worst day of the fire; the scaffolded St Paul's Cathedral caught fire, which also completely destroyed the supplies of the London booksellers stored in St Faith's Chapel. The writer and diary author John Evelyn wrote that the molten lead had run from the roof of St Paul's in creeks over the red-hot cobblestones and that the stone blocks of the building had hit like grenades all around. One of the few buildings that withstood the heat was the medieval Guildhall , in whose crypt the city's papers survived the fire.

While in the west of the city the king and his brother, who had been given command of the city, coordinated fire-fighting measures relatively unsuccessfully, mainly because the wind was working against them, in the northeast, on the leeward side, the chance of securing objects was higher . As an officer in the Royal Navy , Pepys and Admiral William Penn organized the demolition of houses around the Navy Office at the Tower of London . The tower itself was saved in the same way. In the evening Pepys wrote his father a letter about the events, but since the post office had burned down, the letter could not be sent ("the posthouse being burnt, the letter could not go").

When the flames threatened the Palace of Whitehall on Wednesday , the recommendations of the Royal Navy were followed and a fire breach that held the fire was exploded. The wind eased around Wednesday evening, so that the fire could gradually be brought under control and finally extinguished. 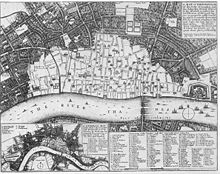 Wenceslaus Hollar : City map of London after the great fire; the destroyed areas in white

All in all, the fire destroyed around 400 streets, 13,200 houses and 87 churches, including the old St Paul's Cathedral, Christ's Hospital, Newgate Prison , the Customs House, the Royal Exchange , three of the city gates and also the German Stalhof . The guildhall was burned out inside, but the medieval walls were still standing. The Tower of London could only be saved by blowing up the houses around it. 80 percent of the houses within the city walls, covering an area of ​​around 1.3 square kilometers, were burned. Around 100,000 residents of London were left homeless. And although only four, eight or nine people died according to official figures, it is assumed that many more residents died. The material damage was later estimated at around ten million pounds, the equivalent of around 1.6 billion pounds today.

Find someone to blame

Although the fire had obviously started in the bakery, the conspiracy theory quickly spread that the Jesuits had started it. The French watchmaker Robert "Lucky" Hubert confessed - probably under torture - that he was an agent of the Pope and that he started the fire in Westminster. He later changed his statement to say he started it at the Pudding Lane bakery. Despite overwhelming evidence of his innocence, he was convicted and hanged on September 28, 1666 . It was only later revealed that he had only come to London two days after the fire. The erroneous belief in a Catholic conspiracy became virulent again twelve years later in the so-called papist conspiracy . A plaque on the monument commemorating the fire, which blamed the Catholics for the fire, was only removed in the 19th century.

Monument to the Great Fire

The clean-up work was initially left to the respective landowners, but in November the king spent a hundred pounds to clear away the rubble that was still lying around.

The reconstruction of the destroyed areas was for scholars such as the astronomer and architect Christopher Wren , the geometry professor Robert Hooke , John Evelyn , Peter Mills (1598–1670) and Richard Newcourt (around 1610–1679) the opportunity to develop their plans for a city with vastness Boulevards and Italian piazzas. As you can see from Wenceslaus Hollar's plan of the city after the fire, many of the foundation walls were preserved and streets were still recognizable. As early as mid-September, the King, Parliament and the Corporation of London, representing London, had agreed that a plan that did not take into account existing land ownership would be too expensive and therefore impracticable.

The city as a corporation was in financial difficulties - its income consisted of property that had burned and the taxes of residents who had fled and in many cases ruined until the fire broke out. The king's finances were in dire straits and Parliament was unwilling to bear the cost of London. Since the state budget depended not least on London's tax revenue, rapid reconstruction was imperative.

On September 13th, the king proclaimed new building regulations in which stone and brick were the only permitted building materials for new houses to reduce the risk of fire. Overhanging floors was forbidden, main roads had to have a minimum width and a wide quay was to be built on the riverbank .

The precise elaboration of the regulations was entrusted to a six-person commission. Three were nominated by the king: Christopher Wren, Hugh May , a civil servant with experience in architecture, and Roger Pratt , an architect, and three appointed by the city: Robert Hooke, curator of the Royal Society , and two men with local knowledge, Edward Jerman (around 1605–1668) and Peter Mills, the city surveyor.

On February 8, 1667, the First Rebuilding Act was passed by Parliament. He specified three types of standard houses, with regulated floor heights and wall thicknesses and a maximum of four floors. It also contained guidelines on how disputes between neighbors about the course of the property were to be settled, and stipulated that individually newly built houses had to protrude bricks on both sides in order to give houses built next to them "connection".

Craftsmen who took part in the reconstruction were offered citizenship for seven years. A tax on coal that was cleared in London made up for part of the enormous loss. Part of that tax was also used to rebuild St Paul's Cathedral, which Christopher Wren built alongside many other churches and buildings. Together with Hooke, he also built the monument that was created to commemorate the Great Fire. The height of the monument (61 m) corresponds to the distance between its location and the former Thomas Faryners bakery in Pudding Lane, where the fire broke out.

Memory, reuse of the term

Memorial plaque to the origin of the fire in Faryner's bakery

Pudding Lane takes its name from the Old English word puddings, meaning slaughterhouse scraps and offal, which were carried on carts along this street to the Thames from the slaughterhouses to the north in Eastcheap and occasionally fell off. There they were loaded onto boats and taken away.

In the air raids in World War II ( The Blitz ) since September, especially on London, the damage from December 29th to 30th, 1940 was called a second fire . The series of German attacks were soon no longer limited to the ports on the East End and repeatedly led to conflagrations. The publication of a photo of the intact dome of St. Paul's Cathedral from that day on December 31st strengthened the will to survive and the morale of the city's population despite the devastating damage. The headline in the Daily Mail read:

(In German, for example: The greatest picture of this war - St. Pauls stands undamaged in the middle of the burning city).