Franz-Josef Sehr (born October 27, 1951 in Beselich-Obertiefenbach ) is a German businessman , fire fighter and fire department official . Very is a holder of the Federal Cross of Merit and world champion.

Sehr was born as the son of a farmer and forester , attended elementary school in Obertiefenbach until 1966 and then the two-year commercial vocational school in the city of Limburg an der Lahn with a secondary school leaving certificate . He completed the subsequent professional training as an industrial clerk in Limburg in 1970. After completing his 18-month military service with the German Armed Forces in Diez , he trained as an accountant and passed the trainer aptitude test. In his professional career at the industrial companies Philips Germany and Black & Decker in Idstein , the wholesaling company Lekkerland in Elz and Frechen as well as the Diocese of Limburg , Sehr was responsible for the last 25 years of his professional activity as a department head in the areas of controlling , treasury and accounting . When changing the accounting system of the Episcopal Ordinariate of the cameral on double-entry bookkeeping ( double entry ) at the beginning of 2003 was very responsible project manager .

Franz-Josef Sehr has been married since 1973. From this marriage with his wife Hedi Sehr had two daughters and a son.

In May 1968, at the age of 16, Sehr joined the volunteer fire brigade (FF) in his hometown Obertiefenbach, which he founded in 1880 and to which he was a resident and respirator until he was retired in 2016 . In this fire brigade, Sehr has been active on the board and fire brigade committee in various functions without interruption since 1969. At the age of 22 he was elected military leader (WeFü) and chairman. Sehr performed these two tasks for 16 years. Since January 2014 he has been chairman of the fire brigade association , which organizes a large wine festival every year . In 1982, fire protection education and awareness was introduced in his responsibility, and women in the operations department and girls in the youth fire brigade, which he co-founded in 1972, have also been involved and promoted in the fire service. During large-scale operations, in particular caused by traffic accidents on federal highway 49 , numerous injured people were rescued and the dead were rescued. Fires on the county waste landfill , the local landfill gas - power plant , as well as severe weather - and wind damage missions were the focus as director of operations at this time. With the Obertiefenbach fire brigade, Sehr took part in more than 50 Hessian fire brigade performance exercises and was with her many times the winner at the district level and twice at the district level in the Gießen administrative district . The participation of four extinguishing groups of a single local fire brigade in a fire brigade performance exercise at the district level, which he initiated in 1986, has still not been achieved throughout Hesse . He completed countless courses at the Hessian State Fire Brigade School in Kassel and at the Academy for Crisis Management, Emergency Planning and Civil Protection in Bad Neuenahr-Ahrweiler . Several large fire brigade anniversary celebrations were organized or co-organized by Sehr.

From 1987 to 2001 he was a volunteer community fire inspector or local fire supervisor for the community of Beselich (GBI) or as its deputy, as well as for five years as community youth fire brigade warden (GJFW), responsible for fire protection and general help at community level. For 26 years he was the secretary of the military leader committee and the joint annual general meetings of the Beselich fire brigades . Because of his commitment, the municipality of Beselich appointed him honorary service leader in 2005.

In 1995 the district committee of the district of Limburg-Weilburg appointed the chief fire chief as honorary deputy district fire inspector (KBI). This task, which he held until the age of 60 within the framework of the fire protection supervision, were the introduction of new course types in the district education management functions in the staff of civil protection (KatS), and in the special and technical employment line connected to district level. Sehr has been a referee for fire brigade performance exercises since 1984 and has been a district trainer for fire brigades in the district since 1996 , which also included the digital radio migration training in 2012 and 2013. He was offered the patronage of several major events.

Sehr was a member of the board of the Limburg-Weilburg District Fire Brigade Association (KFV) founded in 1975 from 1993 to 2011, nine years of which as honorary association chairman . In this association, to which more than 100 fire brigades belong, he carried out a restructuring in the form of the introduction of specialist areas and a significant increase in personnel. Focus during his tenure were the promotion of youth fire brigades (here temporarily taking over the function of the county youth fire warden (KJFW) in one person), including Director of the Regional Youth initiatives to establishment of children's fire brigades , the construction and optimization of a site , an intense public relations and the Fire Brigade Sports . In 2010, the District Fire Brigade Association was the first to be selected as “Fire Brigade of the Month” by the Hessian Ministry of the Interior . After reaching the statutory age limit in 2011, Sehrs outstanding achievements were recognized by the District Fire Brigade Association by being appointed honorary chairman .

In the executive board of the Nassau Fire Brigade Association (NFV) Wiesbaden , founded in 1872 , one of the three Hessian district fire brigade associations (BFV), Sehr was responsible as press spokesman and secretary from 2001 to 2017. Here he made an outstanding contribution to the introduction of the association website, through intensive public relations work and the organization of events, so that he was made an honorary member when he left the company and has been the spokesman for the honorary and age department since May 2019. He was also a member of the board of the Tropp Foundation in the Nassau Fire Brigade Association for 16 years .

Sehr has been represented in the specialist committees of the Hessen State Fire Brigade Association (LFV Hessen) since 1989. Public relations was his focus for over 20 years; since 2011 he has been working in the field of fire protection and fire service history . As chairman of the district association, he was a member of the state fire brigade committee from 2002 to 2011.

The history of the Beselich-Obertiefenbach fire brigade and the fire brigade in the municipality of Beselich, the district, the Limburg-Weilburg district fire brigade association and beyond is closely linked to Sehr. It is largely due to the great commitment of Franz-Josef Sehr.

Against the background of his religious upbringing in his Christian home, Sehr is committed to the church in his hometown. For example, for the interests of the parishes, “St. Egidius " Obertiefenbach and" St. Johannes Nepomuk “ Hadamar has been a member of their board of directors through his voluntary work since 2003 . In 2012, he was also a key founding member of the church foundation Wallfahrtskapelle Maria Hilf Beselich with legal capacity , of which he has been a member of the foundation board and has been its elected chairman since March 2018 .

He has been a member of the board of the Catholic men's organization since 2012 and is head of the Obertiefenbach Heimatstube (local history museum) located in the old school , which deals with the history, tradition and culture of the municipality of Beselich. He is also active as the deputy chairman of the aid organization ELIKIA-KONGO, which he co-founded in 2015.

Very often headed the fate of the local carnival committee , which in particular had set itself the task of holding the annual Obertiefenbach carnival parade . He was the initiator of the establishment of the carnival community Obertiefenbach. He has chaired this traditional association since it was founded in 2013. The 2013/14 carnival campaign was led by Sehr and his wife Hedi as the prince couple . He is also a guard of honor in the Obertiefenbach Carnival Guard from 1995.

From 1964 to 1982, Sehr was a soccer player in his home club TuS Obertiefenbach, with whose youth and senior teams he played numerous championship, cup and friendship games and was made an honorary member in April 2016 . In athletics senior competitions he was several times district champion in the 100-meter run and in the long jump . In the 1990s, he took part in several triathlon and duathlon competitions, in which he emerged as the winner in the age group or took podium places.

In the trade union environment, Sehr became involved in the 1970s as a youth representative at company and corporate level for the rights of young people and trainees. Since its inception in 2007, he belongs to the council of the county's Sparkassen - Foundation and was board member of a church bench . For eight years he worked as a correspondent for actions by the environmental organization Greenpeace . In addition, Sehr has written numerous articles on fire-fighting, church and local history events and topics in various publications . 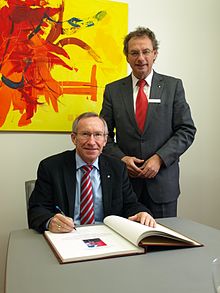 In addition to the award of the Federal Cross of Merit on ribbon on July 16, 2015 by State Secretary Werner Koch , in which District Administrator Manfred Michel , First District Member Helmut Jung and Member of the Bundestag Helmut Peuser and Member of the Bundestag Tobias Eckert took part, as well as other fire-brigade and local recognitions, Franz-Josef Sehr received the following awards opposite: