The title of this article is ambiguous. Further meanings are listed under Kaufmann (disambiguation) and Kaufmann (family name) .

A businessman is a natural person who does business on a commercial basis ( businessman ). He buys trade goods and sells them on with a trading margin in order to cover the costs of the sale and to make a profit . The activities of buying and selling (as well as mere participation in these) form the basis of the commercial professions.

The job title for women is Kauffrau . Historically, the term clerk refers to a woman who trades or the wife of a merchant or merchant. The abbreviations Kfm. And Kffr are common. The plural is merchants .

Merchants as a social class 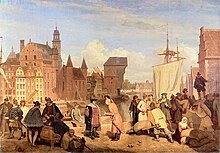 Merchants at Danzig Harbor in the 17th century

The merchants were assigned to the fourth pillar of the traditional three classes of society, the clergy , the nobility and the bourgeoisie . This pillar was sometimes overturned because the merchants were accused of cheating and bragging about their wealth.

At the same time, however, the activity of the merchant was upgraded as work. Since the 12th century, this has corresponded to efforts to include merchants as part of the urban bourgeoisie in the medieval social scheme. The merchant was considered to be of higher social standing than the merchant, although both of them earned their living from trading . In the Middle Ages, merchants were often organized in a guild or Hanseatic League and belonged to the urban upper class, the patriciate .

The model of the honorable merchant emerged in Italy in 1494 and is attributed to Luca Pacioli : "Nothing is higher than the word of the good merchant, and so they affirm their oaths by saying: By the honor of the true merchant".

Commercial professions then and now

The merchant was also called a trader or trader . Until the 19th century, mostly only self-employed entrepreneurs carried the professional title of merchant, later employees were increasingly being used as merchants. In the past, the merchant was just an ordinary trader , whereas nowadays the merchant differs from a trader in terms of legal and educational background . The classic image of the merchant, who is, among other things, a dealer in his own shop or business, is now only given in wholesalers and retailers .

While the term retailer focuses on the purchase, transport and sale of goods, nowadays the retailer is also characterized by economic and social core competencies, such as dealing with modern means of communication and the customer. The businessman is generally involved in costing , accounting , logistics , goods transport , warehousing and marketing . Merchants act commercially, according to commercial principles and with commercial methods, i.e. primarily economically - this is why these professions are also called commercial professions . More specifically operate them under the company economically and across companies economically . Nowadays, a distinction is made between the businessman in the true sense (person with a professional qualification with many specializations according to industry ) and the commercial clerk (person who is employed by a businessman to provide commercial services). In commercial occupations , which traditionally belong to the white collar occupations, there is no distinction between a worker and an employee .

The merchant in the DA-CH countries

Merchant according to HGB

Merchants in Germany are subject to commercial law . According to §§ 1-3 Commercial Code is a merchant who is a commercial enterprise operates, a company leads or in the commercial register is registered. Thus, the merchant in the legal sense, a businessman while colloquially under Kaufmann, a professional of employees is understood.

The commercial occupational field also includes, for example, training as a merchant for forwarding and logistics services , shipping merchant , real estate merchant , automobile merchant and as a merchant for insurance and finance . In 2012, the Federal Statistical Office registered 31,902 newly concluded training contracts as a retailer. However, male and female adolescents differ in their career choices. When it comes to new contracts by young women, the retail trade is in first place. 7.8% of female apprentices with newly concluded contracts started training in this profession in 2012. The previous school education also influences the career choice. Industrial clerk, wholesale and foreign trade clerk and bank clerk were the most common training occupations for young people with university entrance qualifications.

In Austria, the term merchant was abolished in 2007 with the reform of commercial law . There was felt the term as too complicated and now only speaks of the entrepreneur , who the corporate law subject. As a profession , the merchant continues to exist as in Germany.

The commercial apprenticeship is the lone leader among school leavers in Switzerland. The basic training to become a businessman is possible in three profiles. Profile B (basic basic education) focuses on IT, communication and administration (IKA for short) and on a foreign language. Profile E (extended basic education) includes the focus on business and society (W&G for short) and two foreign languages. There is also the option of completing an apprenticeship with a professional Matura (Profile M). This corresponds to the training level of the extended basic education, with the trainee taking finance and accounting as a focus subject. The professional association of traders, KV Switzerland , has around 55,000 members and is an important partner in training and further education as well as in employment issues. In accordance with Article 4 and Article 21 of the Ordinance of the Federal Office for Vocational Education and Technology (OPET) on basic vocational training in business administration with a federal certificate of competence (EFZ) of September 26, 2011, basic vocational training lasts three years and is concluded with a final examination. Professional examinations (BP), for example for marketing specialist and higher technical examinations (HFP), for example for marketing manager, offer further training opportunities . College qualifications can be acquired by attending a higher technical college or university of applied sciences.

L. Rothschild: Pocket book for merchants - A manual for trainees of the trade, as well as a reference book for each office. Contains: The whole of commercial science , publisher of commercial handbooks, textbooks and language books, GA Gloeckner, 48th revised edition, Leipzig 1905.

Commons : Merchants in the fine arts  - collection of images, videos and audio files