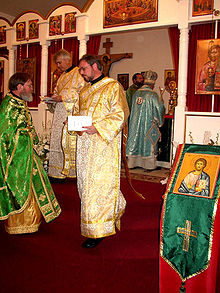 Members of the clergy of the Orthodox Church: deacons, priests and bishops

The clergy (anciently also clergy or clerisei ) is the totality of the members of the clergy, the clergy .

The term refers primarily to the levels of the consecrated priesthood in Christianity, but is occasionally also transferred to conditions outside of it and used for worshipers or clergy of other religions, for example the Shiite clergy . In principle, however, one can only speak of clergy if there is a group of ministers with priestly or comparable functions within a religious community who are clearly different from the other believers - the laity . This is for example in Sunni Islam , but also in most Protestant churches , which have a Reformation understanding of the generalRepresented the priesthood of all believers , not or only to a limited extent. In the general sense, one also speaks of the clergy .

The word clergy ( Latin clerus derived therefrom also English clergy , French clergé etc.) is Greek κλῆρος kleros back that actually means something like "Shard" meant in a special sense, then "Go, used as Los Shard" (cf. . Judgment of broken fragments ), and therefore ultimately “inheritance or share accrued by lot”. Its current, i.e. theological meaning of "selected priesthood" is linked to the first chapter of the Acts of the Apostles , in which it is described how Matthias was chosen as the twelfth apostle by drawing lots (Acts 1:17: τὸν κλῆρον τῆς διακονίας ταύτης), at least it came in the Greek and Latin church language of the old church . Probably the term was coined around the year 200 AD, at least the expression is not yet found in the writings of the Apostolic Fathers ; the first time he encountered in Tertullian (eg. De monogamia 12 , Unde enim Episcopi et clergy nun de omnibus'? , dt, "For where the bishops and the clergy are taken Surely from the mass of Christians?..") , then a little later with Origen (9th homily to Jeremiah) and Clemens of Alexandria ( Quis dives salvetur 42).

In the Catholic , Orthodox , Anglican, and Old Catholic Churches, a cleric is an ordained minister who has received one of the three degrees of the sacrament of ordination. The clergy of these churches can therefore also be calledDenote consecration . In the Roman Catholic and Orthodox Churches, only men can receive the sacrament of Holy Orders.

Clerics are deacons , priests and bishops . In contrast to the clergy, the believers who have not received the sacrament of Holy Orders are called lay people .

Certain forms of clothing ( collar or beffchen , gown or cassock , birett , pileolus , kamilavka ) and hairstyle ( tonsure , beard, pigtail) are common as external signs of belonging to the clergy , which vary depending on denomination or tradition . When celebrating church services , clerics wear liturgical vestments .

The doctrine of apostolic succession is important for the recognition of ordination offices in and between the various churches . H. the uninterrupted transmission of the episcopate and the priesthood, starting from the church to view through Christ used in this office apostles . 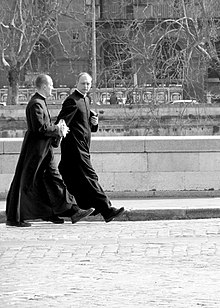 According to earlier Catholic canon law (until 1972), admission into the clergy already took place through tonsure (which could be received before receiving any ordination, for example by seminarians ). As a preliminary stage to the ordination of deacons , various minor ordinations had to be passed through, some of which still exist in the Eastern Churches today. Historically, the holders of minor orders (also known as minorists ) already belonged to the clergy (thus, for example , were subject to spiritual jurisdiction ), but were not subject to certain rights and obligations, or not to the same extent as majorists . Today in exceptional cases - for example in churches united with Rome with a different rite or in the extraordinary form of the Roman rite - minor ordinations still donated no longer lead to the fact that the persons concerned are considered clerics according to Catholic canon law.

Belonging to the clergy is associated with various duties and rights, essentially including:

One can also lose one's clerical status again. Although the sacrament of consecration can not be reversed due to its indelible character through the so-called laicisation , the person concerned is released from the rights and duties of a cleric.

The so-called religious, i.e. religious and members of similar associations or communities, occupy a certain special position . In the Catholic Eastern Churches and in Orthodoxy, they apply (unless they belong to the clergy by ordination) as a separate spiritual class (together with hermits and consecrated virgins ), which cannot be assigned to either the clergy or the laity. In the rest of the Roman Catholic Church, this was similar until the reform of canon law through the Codex Iuris Canonici promulgated in 1983 (at least LG 31 suggests this) or not precisely defined. At the same time, within most of the male orders in the Catholic Church, especially in the so-called priestly orders, up to the Second Vatican Council there was a clear separation between the lay brothers and the clergy who had received the ordinations and were privileged in many respects. Today consecrated persons in the Latin Church are canonically regarded either as lay people or as clerics, depending on whether they have received the sacrament of consecration or not. At the same time, the different treatment of lay people and priests within the orders has largely been abolished, although depending on the canonical constitution of the institute ( clerical or lay ), some leadership positions are still reserved for the consecrated.

In orthodox school theology, the difference between clergy and lay people is the main element of official teaching. The higher clergy are made up of the three ordinations deacon, priest and bishop. However, according to the Orthodox view, the people of God are not simply divided into clergy and lay people, but are often hierarchically structured, “in bishops, priests, deacons, ipodiacons, readers, psalm singers, baptized lay people and catechumens.” In addition there are monks , nuns , hermits , consecrated virgins , Deaconesses (the latter historically up to the 13th century), who in turn are regarded as separate classes and, similar to the early church literature, are counted as clergy in the broader sense or occupy an intermediate position. The authority of an Orthodox abbess to give blessings to the individual believers in her monastery - also in worship - illustrates the priestly character of her understanding of ministry. According to the orthodox understanding, the variety of offices and estates also expresses the “ eschatological beauty” of the Church, which as an earthly foresight points to the beauty of the world to come and is symbolically reflected in the liturgy. The call of the deacon at the beginning of the Divine Liturgy can evoke this: "Let us stand beautiful, let us stand with awe, let us be attentive to offer the holy sacrifice in peace."

In the so-called "Eucharistic ecclesiology", which was shaped by Nikolai Nikolajewitsch Afanassjew (1893–1966) and Alexander Dmitrijewitsch Schmemann and today largely recognized as the dominant Orthodox doctrine, which is based on the understanding of the church by Ignatius of Antioch and which found broad approval in Orthodoxy, the church appears Ministry entirely at the service of the local Church , whose center is the implementation of the Eucharist in union with the Bishop and the other local Churches. Correspondingly, an ontological understanding of ministry, as expressed in the traditional clerical structure of the Roman Catholic hierarchy, has remained alien to Orthodoxy even in modern times. However, Afanassev's thinking also had noticeable repercussions on the Roman Catholic Church, which in the Second Vatican Council also placed the Eucharist much more at the center of its understanding of ministry and church than before. Afanassiev's official teaching also shows possibilities for ecumenical dialogue with churches that have not preserved the apostolic succession of the episcopate.

In the Orthodox Church today, the bishop is the leader of the local Church, the presbyter is the leader of the Eucharist. As in the early church , in Schmemann's view, "the fullness of church life and gifts" is only realized in the unity of bishop, clergy and people. In orthodox practice, therefore, the clergy includes those who lead a congregation or exercise a teaching or worship position in the local congregation; Little emphasis is placed on a clear conceptual separation between ordination and commissioning offices with regard to their assignment to the clergy. In contrast to Afanassjew (who was critical of her), Schmemann also appreciated the ordination as an ecumenical link between the local churches.

In the area of ​​the Reformation confessional churches, which reject the sacrament of ordination, but have an ordination of their pastors that is externally comparable to the ordination of priests , the term is sometimes used as a colloquial collective term for ordained congregation members.

In principle, however, the opposition between clergy and laypeople in the Reformation tradition is considered to have been canceled. On the one hand, according to the Protestant understanding , the authority of Scripture (the Bible ) does not require mediation by specially consecrated persons, but can be understood by every Christian. In Reformation movements (as in earlier reform movements) it was therefore an important concern from the start to enable lay people to read scriptures (in the vernacular ) and not just priests and monks .

Starting from Martin Luther , the Protestant tradition further developed the idea of ​​the general priesthood of all baptized and emphasizes that the redemption through the sacrifice of Christ is unique and final, so that there is no longer any need for sacrificial priesthood tasks and thus also no special priesthood for which the role reserved for the priest as head of the Lord's Supper and “administrator” of the sacraments.

Role of the clergy in society

In the religiously organized societies of the European Middle Ages , in which church and society were regarded as a unit, the clergy also formed a special social group, a so-called state . According to the understanding of the medieval world order, the main task of the clergy was to care for the salvation of the soul of the believers, i.e. the general public. Belonging to the clergy was associated with certain rights (such as tithing ) and duties (such as celibacy ). Up until modern times , the higher clergy in particular enjoyed - similar to the nobility , from which they came almost without exception - various privileges vis-à-vis simple citizens and farmers ( third class ). With the Enlightenment , the strengthening of the bourgeoisie after the French Revolution , secularization , the anti-clerical and secular movements and social models of the 19th century, the separation of state and church , the emergence of democratic forms of society and finally the declining influence of religion on society Life in Europe in general ( secularization ) the special sociological position of the clergy has largely lost its importance since the end of the 18th century until today. As a separate social class , the clergy practically no longer exists in modern Europe.

The social change to which the role of the clergy in society has been subject in European history over the past millennium has also led to major changes in terms of the composition of the clergy, the social origins of their members and the motivations that move people to embark on a clerical career. Particularly in western societies, the decreasing attractiveness of the clerical profession in large parts of the world has led to crises in some churches, especially in the Roman Catholic church ( lack of priests ).

In Germany, clerics are exempt from military service ( Section 11 WPflG) and should not be appointed lay judges ( Section 34 GVG). Historically, the clergy also had significantly more extensive privileges. A tendency directed against the special social position of the clergy and the church in general is called anticlerical .

To the high clergy: