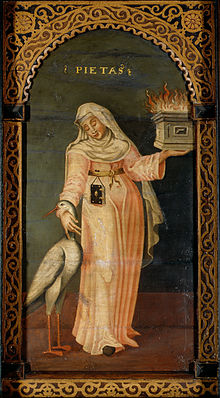 Allegorical representation of piety in the circle of Christian virtues

Piety (Latin pietas ) denotes an attitude that is deeply rooted in a belief , which is expressed in a lifestyle oriented towards it in the sense of the teachings and cults of the corresponding religion . In Christianity the terms piety and spirituality are sometimes used as synonyms. The term is often equated with fear of God .

Wherever piety is rooted in the people, one speaks of popular piety ; where it only appears given, exaggerated or deviating from one's own ideas, one also speaks pejoratively of " bigotry ", "hypocrisy" or bigotry .

The word, which has been attested since the 8th century, is derived from the Old High German noun fruma , froma ("benefit, advantage"; Middle High German vrum , vrom ). The adjective initially had the meaning "useful", later also "capable" and "righteous". In the 16th century it was still related to animals and things.

Frum is etymologically connected to Indo-European with corresponding terms, in particular with the Greek εὐσέβεια ( eusébeia ), the Latin pius and thus the protruding , adviser and capable (cf. ἀρετή arete ). "The Old High German Gothic < frum > contains an ethical element of behavior [...] in the Roman pietas [...] as reverence for and obedience to the order of life." This meaning lasted into the 16th century. Even Martin Luther used the word in this sense. When he meant “pious” in today's sense, he used the word “godly”.

The original meaning of the word has also been preserved in words like “pious”, which means something like “useful, to help”, and in formulations like pious hands, pious servant or pious animal, where it is “good, useful or honest” and “gentle” "easily steerable, obedient" means (cf. the expression: "lamb pious"). Johann Wolfgang von Goethe, on the other hand, used 'piety' in the sense of 'righteous' and as 'well-meant, but unattainable'.

From the 17th century piety was mainly used in connection with reverence for the divine, initially strongly related to Pietists, with Immanuel Kant positive in the sense of a guiding principle "from above" and negative in the sense of "a servile temperament". The breadth of variation generally extends from on the one hand mystical-contemplative forms, also inwardness turned away from the world and on the other hand " transcendentally bound spiritual-religious world responsibility up to the immanent-religionless world-piety of atheistic-socialist humanism ."

While religiosity primarily means reverence for the order and diversity in the world and the feeling of a transcendent reality, piety also includes the conscious turning to faith and its active practice.

Derived from its historical usage, the term spirituality is sometimes still used synonymously. Today, however, this mostly means a turn to the transcendent without a necessary reference to a specific religion.

See the virtues in Aeschylus and Socrates with piety (εὐσέβεια, eusébeia ), which systematically replaces Plato's doctrine of the 'good' with cleverness (φρόνησις, phrónesis ) and wisdom (σοφία, sophía ). See also Epicurus' attitude with a "materialistic" worship of the "gods" of the world.

In ancient Rome, pietas was basically understood to be honoring, respectful behavior that respected hierarchies. Pietas could denote both obedience and reverence towards the gods or (in Christian late antiquity ) towards God, as well as respect and esteem for socially superior people. In particular, reverence for the father or paternal power was considered a central virtue by the Romans. It was not until the Latin literature of the Middle Ages that pietas was largely restricted to religious significance. The Pietas was occasionally struck on the reverse of coins from the Roman Empire. 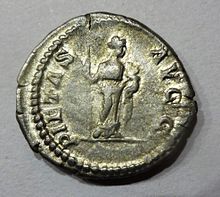 Pietas on denarius of Plautilla, reverse

The phenomenon of piety is found in every religion . One can distinguish between inner mystical and expressive ecstatic piety.

As a rule, piety is expressed on the one hand religiously in prayer , sacrifice , (regular) participation in (cult) acts, and on the other hand practically in respectful and merciful treatment of the living and the dead. The importance of exercising the faith and the demands on the individual believer can vary widely.

In the Tanakh , the fear of God is the core of piety. Shyness of the punishing, angry God and jubilation over his mercy characterize the inner attitude of Israel in the Tanakh. Abraham is considered to be the ideal type of Israelite piety, which actually consists of probation paired with humility and trust in God and which results in complete surrender. The Book of Proverbs calls the fear of God the "beginning of wisdom". ( Prov 9.10  EU )

In later Judaism, the concept of piety is closely linked to the concept of observance of the law, which means that the pious Jew adheres to the rules and laws of his forefathers, primarily as they are recorded in the Torah , e.g. B. to keep the Sabbath, to observe the Purity Laws exactly, to fast, to give alms etc. This concept of piety, which the Pharisees advocated, led - misunderstood - to the piety of the law, which consisted of purely formal obedience and by observing it certain people are entitled felt they were making demands on God too. However, such an attitude is rejected by almost all Jewish authorities - keeping the law is indeed very important to them, but in no way replaces the necessary inner attitude towards God. In early modern Eastern Judaism , the ecstatic piety of Hasidism developed .

In the New Testament there is much evidence that Jesus Christ spoke out clearly against a purely outward piety of the law, especially with regard to the Pharisees ( e.g. ( Mt 23.28  EU )).

In the old church , the way of life of the hermits , consecrated virgins or, in the later convents, was considered an expression of devotion to Christ and lived piety. Only in the course of time did the understanding of piety expand to such an extent that every believer can be considered pious without his piety having to be tied to certain external circumstances. In the Catholic Church, piety is counted among the gifts of the Holy Spirit .

Since the Enlightenment , especially in Protestantism , more and more emphasis was placed on "inwardness". It lives from the faith of the individual, who can live his piety even in the "quiet little room". This gave rise to the great Pietism movement in the 18th century , which in its beginnings was entirely shaped by this personal, private piety. Everyone must represent before himself and his Creator how intensely and truly he does his service for God and people. In the 19th century, piety was narrowed down even further than “the determination of feeling”, according to Schleiermacher .

The piety of the individual believers can therefore be very different, but always relates to God and includes participation in the Christian community.