The title of this article is ambiguous. Further meanings are listed under Ecstasy (disambiguation) . 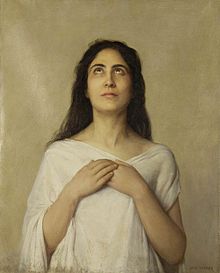 Ecstasy ( ancient Greek ἔκστασις ékstasis " falling out of oneself , rapture"; from ἐξ-ίστασθαι ex-hístasthai "coming out of oneself, being beside oneself") is a term used in religious studies and psychology . Ecstasy is a collective term for particularly intense psychological exceptional states that resemble or are unleashed by a trance . Those affected describe them as dramatic changes in the state of consciousness .

According to her, consciousness is experienced as "expanded" or "heightened" during ecstasy. Through this expansion or increase, the person concerned (or someone observing him) gets the impression that he is “beside himself” or “not with himself”. This means that he has stepped out of the area of ​​his familiar environment and normal perception and entered an area of ​​different possibilities of perception. The historian Peter Dinzelbacher describes ecstasy as the "stepping out of the soul from the body with simultaneous suspension of sensory perceptions" and, in a broader sense, a "state of intoxication with reduced awareness" .

During ecstasy, this other area appears not only to be completely real, but to be the only reality . In retrospect, too, ecstatic people tend to regard what they experience in ecstasy as more significant, more valuable and more real than the everyday world. Religious ecstaticians interpret and evaluate their ecstatic experiences in the context of their respective religious worldview. In some cases, “being outside of oneself” is also understood literally in the sense of a local emergence of the soul from the body.

In the Greek-speaking world of antiquity , ekstasis was generally understood to mean the experience of “stepping out” in the sense of being outside of oneself. This also included states of religious frenzy and intoxication , which were striven for and often experienced collectively.

The Greek word ekstasis was adopted by the Latin- speaking ancient church fathers as a foreign word in Latin ( ecstasis , in vulgar Latin spelling also exstasis or extasis ). In the Middle Ages and in the early modern period , the associated ideas were shaped by popular hagiographic literature (descriptions of the lives of saints ). The biographies of the saints, mostly originally written in Latin, were translated into the various vernacular languages. So the word came into French as extase .

In German, the word was initially only used as a Latin technical term ecstasis in the early modern period and translated as "ecstasy". It was not until the late 18th century that it became common in German as “ecstasy” or (often) “ecstasy”, with the impetus from both the Latin and the French term. In addition to the traditional religious meaning (ecstasy of the saints), from the middle of the 17th century, under the influence of the French use of the term, a transferred meaning emerged: ecstasy as increased, rapturous joy, admiration, enthusiasm and delight, as intoxicating exuberance, especially in the field of art and poetry, but also in friendship and love. Such emotions were particularly valued and emphasized in the epoch of sensitivity . From the later 18th century the adjective “ecstatic” (“enthusiastic, ecstatic, exuberant, enthusiastic”) became common. In the 19th century the noun "ecstatic" was formed for this purpose.

In this sense, in today's colloquial language, ecstasy is a state of greatly increased joyful emotional excitement, in particular an extraordinary astonishment with admiration and enthusiasm. The term is used in a figurative and flattened sense when it is said that someone is "falling into ecstasy" without referring to going beyond the normal range of perception. This can also have a negative connotation if the environment evaluates the experience as abnormal and exaggerated or even as pathological.

In modern religious studies, on the other hand, only extraordinary states of religious experience are referred to as ecstasies.

The occurrence of ecstatic experiences can be brought about or promoted both by a reduction (impairment or elimination) of normal functions of the human organism and a lack of stimuli as well as by an increase in external stimuli.

An ecstasy can come and go completely surprising for the person concerned or be planned and brought about by him. Ecstatic people who bring about their experiences according to plan, or at least create favorable conditions for them, often strive to reach a climax in which they see the goal and the completion of the experience.

Shamans achieve a consciously induced ecstatic state with the help of rituals , which very often include the use of shaman's drums , rattles , song and dance, in some cultures also the use of herbal drugs such as toadstool , peyote , ayahuasca and cannabis . The aim of the shamanic journey is to obtain information from normally inaccessible areas of reality. Depending on the task, the shaman goes to the under, middle or upper world. In the underworld he strives for contact with earth consciousness (animals, plants, elements), in the upper world with purely spiritual things, in the middle world he deals with the sensually perceptible area. (See also: shamanism .)

Descriptions of mass ecstasies of the Thyads as well as individual ecstasies have come down to us from Delphi . Pythia gets intoxicated by the vapors rising from the crevice in order to then proclaim oracles .

The Tanach describes the ecstatic vision of Jacob's ladder , which the Archfather Jacob is given in a dream while fleeing from Esau . It knows the figure of the nabi , i.e. the prophet , who is given visions on the basis of which he prophesies. Ecstatic women ( Debora ) are also portrayed. The great prophets, above all Ezekiel , who was active in Babylonia , refer to visions and auditions ( Isa 6  EU , Jer 1  EU , Ez 1  EU ). The descriptions of the apocalyptic are essentially based on ecstatic experience ( Book of Daniel ).

And the rabbinic Judaism knows ecstatic trains and especially the Hasidic portrays intense ecstasy experience, where Baal Shem Tov is the most important ecstatic.

The Islamic literature describes different raptures. The mystical orders ( tariqas ) of the Sufis with their ascetic practices (dances, chants) during the dhikr (commemoration of God) have created systematic conditions for ecstatic experiences, as have some Shiite rituals, which include self-flagellation . In the current of Sufism, however, ecstasy is not the goal, but merely a possible vehicle to get closer to God. The Sufis warn, however, that remaining in ecstasy represents a veil on the way to God and can make reaching the goal more difficult.

John the Baptist is portrayed in the New Testament as an ascetic ecstatic. From Jesus experiences of rapture around his baptism (Mk 4) or his transfiguration (Mk 9) are reported. Whether they are to be understood as direct ecstatic visions is sometimes doubted. In early Christianity , visions and auditions grow with the Pentecost event and accompany the first martyrs ( Stephen ). The apostle Paul , a lively ecstatic himself since his conversion , refuses to overemphasize these experiences.

The old church as well as the heretical movements (e.g. Montanism ) know numerous ecstaticists, some of whom are aggressive. Polycarp of Smyrna saw his pillow on fire in a dream, whereupon he prophesied his martyrdom.

The writings of the Pseudo-Dionysius Areopagita , written around 500, which were considered authentic works by an apostle student until modern times, describe ecstasy as stepping out of oneself and being lifted up to the essential ray of divine darkness .

Medieval spirituality takes place e.g. B. in Bonaventure 1221–1274 a guide through the ecstatic experience, which he classifies as fire, anointing , ecstasy, contemplation , tasting, rest, glory (“gloria”). In ecstasy the soul is "carried away by the bewitching scent of the previous anointing and removed from all bodily sensations".

The Flemish scholar Jan van Ruysbroek was called the doctor ecstaticus because of his intensive study of the phenomenon of ecstasy . Even Francis of Assisi is one of the recipients in ecstasy experienced revelations.

Eckhart (1260-1328) characterized the German equivalent of the foreign word ecstasy rapture and rapture .

The radical wing of the Reformation understood the ecstatic experiences that broke out in the 15th century as spiritual legitimation for its action against the established church. Even though Martin Luther had published the mystical theologia in German , he faced the force of this phenomenon, which found its theological spokesman in Thomas Müntzer , without understanding and with complete rejection. In Reformation rationality, he coined the derogatory term " enthusiast " for ecstatic people who were inspired by enthusiasm .

In this situation , the emerging Counter-Reformation found a fertile ground for ecstatic experiences, in which numerous ecstatic people took root. Theresa von Ávila (1515–1582) is one of them , who in religious ecstasy almost eliminated the difference between spiritual and physical devotion: There is only one love , and a series of stages created from “union” to “rapture” up to "Love wound". The sculptor Gian Lorenzo Bernini expressed this unequivocal coincidence of physical and spiritual pleasure in the statue group Ecstasy of St. Theresa . Closely connected and spiritually related to her was John of the Cross . St. Philip Neri was also an important ecstatic .

Jakob Böhme is one of the well-known German ecstaticians , who also merged piety and eroticism in his ecstatic portrayals:

the chaste virgin ... will lead you to your bridegroom, who has the key to the gates of the deep ... who will give you to eat of the heavenly manna: it will refresh you and you will become strong and wrestle with the gates the depth. You will break through as the dawn.

In 17th century England it was the visionary , ecstatic and itinerant preacher George Fox who triggered mass ecstasy, which manifested itself in the form of a tremor , after which the community of friends he founded were called Quakers (from quake ).

For John Wesley and the Methodist Mission , ecstasies were a touchstone of their missionary success, and Wesley made meticulous notes about the severity and strength of his revival speeches. The group and mass ecstasies triggered at the beginning of the 19th century during the Methodist camp meetings in the USA particularly affected women and African-Americans.

In the context of the Charismatic Movement , ecstatic experiences have gained in importance again, known as the Toronto blessing .

After ecstatic experiences, some women saw themselves in a special way as the beloved of God, as evidenced by the tradition of the Hieros gamos , ( ancient Greek ἱερὸς γάμος hierós gámos "holy wedding") or enigmatic tales as in Genesis ( Gen 6: 1-4  EU ) .

In Voodoo , women celebrate weddings with gods up to the issuing of wedding certificates and the birth of ghost children. These mystical ecstasies are not always sublimations and “purely symbolic” ( Walter Nigg ).

Except in transpersonal psychology , the experience of ecstasy in psychological literature is mostly viewed critically as a loss of control and reality . Often there is no differentiation between pathological phenomena and spiritual experiences.

According to Karl Leonhard , ecstasy arises with excessively strong affect in religious rapture, excess dance and as a state of highest happiness in fear-happiness- psychoses . In this state the state of consciousness bears the stamp of the dreamlike, revelations can be experienced.

Similar images are also possible in detention psychoses and in hysterical states of emergency, but here with clear psychogenic hallucinations .

In the disoriented twilight state of epileptics one sees occasionally ecstatic raptures, possibly with criminal acts. The sick see the sky openly, socialize with those who are absent, listen to spherical music, have smell and taste sensations described as wonderful and a sexually colored delight that pervades the whole body.

In intolerable, psychologically stressful situations, schizophrenics almost escape into the twilight state. Another world is fantasized about with direct wish fulfillment. Here, too, an ecstatic character of the abnormal perception and observation is possible.