Gian Lorenzo Bernini , also Giovanni Lorenzo Bernini (* December 7, 1598 in Naples , † November 28, 1680 in Rome ), was one of the most important Italian sculptors and architects of the Baroque . 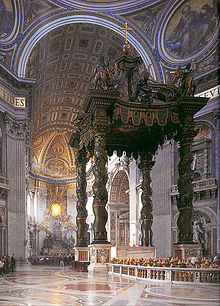 He was trained in the sculpture workshop of his father Pietro Bernini (1562–1629). In 1606 he came to Rome with his son to work in the Cappella Paolina in Santa Maria Maggiore for Pope Paul V Borghese.

Between 1618 and 1625 Bernini created the famous mythological groups of sculptures for the cardinal nepot Scipione Borghese : Aeneas and Anchises, The Rape of Proserpine 1621/22, Apollo and Daphne and David . They stand out due to their extraordinary dynamism, direction of movement, dramatic light-shadow effects and excited gestures. Today these works can be seen in the Galleria Borghese in Rome.

His most important patron, Pope Urban VIII , entrusted the young Bernini with the construction of the canopy ( ciborium ) over the tomb of St. Peter in St. Peter's Basilica , which Bernini made with the help of Borromini from the bronze cladding of the entablature of the vestibule of the Pantheon (1624-1633).

What is remarkable about his architectural work is the mixture of sculpture and architecture, which is also reflected in the ecstasy of St. Theresa (1646–1652), in the Cathedra Petri (1656–1666) or in the church of Sant'Andrea al Quirinale (1658 –1670) can be observed. Bernini completed the Palazzo Barberini in 1629 , created, among other things, the colonnades on St. Peter's Square (1656–1667 under Alexander VII ) and built the Four Rivers Fountain on Piazza Navona (1647–1651 under Innocent X ).

Bernini worked for eight popes in the course of his life and did not leave Rome - with one exception: The "Sun King" Louis XIV called him to work out plans for the new building of the Louvre (1665) in Paris . Although they were never carried out, they still had a lasting influence on European secular architecture . Bernini's generous style, which can be attributed to the classicist Baroque , was not without criticism. Borromini accused him of copying Michelangelo's stylistic achievements in an unoriginal way .

Bernini is buried in a simple tomb in the church of Santa Maria Maggiore in Rome.

Bernini had a decisive influence on the development of baroque sculpture and architecture in Rome .

In contrast to his competitor Borromini - also an influential architect of the time - Bernini is characterized by clear facade design, stronger orientation towards the forms of the Renaissance and the combination of architecture and sculpture.

In his work as a sculptor, a short realistic phase (lifelike portrait busts, e.g. Cardinal Scipione Borghese ) was followed by an idealistic phase in which, in addition to the faithfulness of the portrait, the sublimity in the representation also plays a major role (example: Franz von Este (1650)). From this point onwards, an idealistic but very dynamic style is typical for him.

The art patronage between Pope Urban VIII and Gian Lorenzo Bernini is probably one of the most fruitful in the early modern period . In the 17th century there was a decline in many of Italy's small states , which also changed the structures of patronage. Many artists aspired to Rome , the popes and their nephews were the most important clients alongside influential and wealthy nobles. When Cardinal Maffeo Barberini was elected Pope in 1623, the Vatican was very rich. He spent large sums of money so that artists could develop freely. His function as head of the Catholic Church, patriarch of an ambitious family and absolute ruler of the Papal States increased the importance of his art sponsorship. The art patronage of Pope Urban VIII and his nephews still shapes the cityscape of Rome today. Bernini got to know him as a cardinal . The prelate recognized the talent of the young artist and gave him his first assignment. The cardinal did not yet have enough influence to bring Bernini the reputation of a great artist. When he was elected Pope, he secured Bernini's reputation and prestige in Rome and throughout Europe. He made sure to tie him to himself to benefit from his fame. A large order brought a lot of honor not only to the artist, but also to his patron. Bernini almost exclusively created works for the Barberini family . In order to be able to give an assignment to Bernini as an outsider, the Pope's approval was required, which was only given in exchange for useful consideration. Bernini himself also made sure that nobody contested his place as the first artist in the state. Other artists could only be known if they were supported by him. The relationship between Urban VIII and Bernini was based on mutual respect and trust. After the death of Urban VIII, Bernini worked for Innocent X and continued to support young artists. 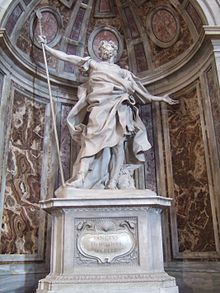 A crater on the planet Mercury is named after Gian Lorenzo Bernini . On the occasion of his 420th birthday in 2018, the dwarf state of San Marino dedicates a 2 euro commemorative coin to him .

Two of his daughters, Celeste and Angela, lived as Ursulines in the monastery of Sante Rufina e Seconda until their death .