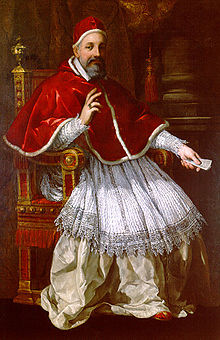 Maffeo Barberini comes from an influential Florentine merchant family and studied with the Jesuits in Rome . In 1589 his doctorate he in Pisa to Dr. jur. and soon afterwards pursued a career in the Roman Curia . 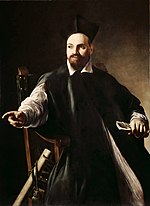 In 1601 he was appointed envoy extraordinary to Paris to the court of King Henry IV . In 1604 Pope appointed him Clement VIII. To Titular Archbishop of Nazareth and the papal nuncio in France .

Two years later, on September 11, 1606 Pope named him Paul V. to Cardinal of the titular church of San Pietro in Montorio . Two years later the Pope appointed him bishop of Spoleto , in 1611 as papal legate in Bologna and in 1617 as prefect of the Signatura . Since his creation as a cardinal, he maintained a friendly relationship with Galileo Galilei .

On August 6, 1623 he was elected as the new Pope by the conclave . He used to conduct all affairs of state himself with diplomatic skill, ignoring the advice of the cardinals. Urban VIII is considered a classic example of a nepotist Pope. Cardinal Lorenzo Magalotti , who held important offices within the Curia during his pontificate , was related by marriage to him. Urban VIII's nephew Francesco Barberini served as the cardinal depository . He also named his younger brother Antonio Barberini cardinal, as did his brother Antonio Barberini the elder . Historians point out, however, that an early modern pope relied on surrounding himself with close relatives or other people close to him in order to enforce his policies. Urban VIII, too, bowed to these constraints and raised three of his long-time companions to the rank of cardinals. These are Angelo Giori , who was once the tutor of the Barberini family, as well as the maggiordomo Fausto Poli and Francesco Adriano Ceva .

Coat of arms of Pope Urban VIII with the three bees

Urban VIII spent large sums of money on building measures in Rome, as the omnipresent coat of arms with the three bees symbolizing work, thrift and sweetness still testifies today. On November 18, 1626, after 120 years of construction, he inaugurated St. Peter's Basilica .

He sponsored Bernini , from whom he had commissioned the statue of a boy with a dragon (now in the Getty Museum ) as cardinal in 1617 . The fact that he had the existing bronze cladding removed from the Pantheon and melted down for the altar canopy above Peter's grave is a legend he launched himself in order to intercept any criticism; rather, the bronze was used for cannons. Bernini also worked on his behalf on the Palazzo Barberini , on the north facade of the Palazzo di Propaganda Fide and on the Triton Fountain in Piazza Barberini. He created statues of both the Pope and his brothers Carlo and Antonio and portrayed Urban VIII. He and his nephews also commissioned painters such as Nicolas Poussin and Claude Lorrain . Pietro da Cortona not only created a portrait of the Pope in 1627, but also the monumental ceiling painting Allegory of Heavenly Providence (also called the power of Barberini ) in the great hall of Palazzo Barberini from 1633–36 .

In ancient monuments but Urban VIII took. With his modernizing construction no consideration. So he released the Colosseum in Rome as a quarry, so that the Latin proverb still gets around in Rome today: "Quod non fecerunt Barbari, fecerunt Barberini" - "What the barbarians couldn't do, the Barberini". He had the Castel Sant'Angelo strengthened and equipped with modern cannons. He turned Castel Gandolfo , southeast of Rome, into his summer residence.

In 1625 Urban VIII created. A first canonical provisions, the provisions on the procedure for beatification and canonization contained. He founded the Collegium Urbanum in 1627 and set up the papal printing house . Urban VIII confirmed several ecclesiastical orders in his pontificate and enforced the regulations for the residence obligation of the bishops based on the resolutions of the Council of Trent .

Although standing at the top of the church hierarchy, he did not succeed in stopping the Inquisition - so the trial and the condemnation of Galileo Galileo fall into his pontificate. Urban VIII, who had worked as a patron of the arts and sciences, admired the explorer Galileo, but was forced to break with the Inquisition at the urging of the Inquisition. However, it is very likely that Urban VIII saved his childhood friend and student friend from death at the stake by forcibly revoking his teachings . With the fall of Galileo, during the pontificate of Urban VIII, the conflict between the church's claim to authority and free science was raised for the first time beyond the church into social consciousness.

Theological and ecclesiastical history of the city proved to be significant that Urban VIII published the first papal condemnation of Jansenism with the bull “ In eminenti ” in 1643 , thus triggering a long-lasting conflict.

The Barberini Pope acted remarkably cautious in the Thirty Years' War , which fell into his pontificate . In contrast to his predecessor Pope Gregory XV. He did not grant any more funds to Emperor Ferdinand II , although he not only carried out the Counter-Reformation with all severity in the Habsburg hereditary lands , but also returned the church property, which had been lost as a result of Protestant secularization, to the Catholic Church through the Edict of Restitution . Urban's sympathies were on the side of France, because he is a vice of the Papal States by the Habsburgs feared that the south of the Italian peninsula (King of Naples and Sicily) and beyond the Alps large parts of central and eastern Europe dominated, to Spain and the Spanish Netherlands, and which he did not want to see gain a foothold in northern Italy. In the Mantuan War of Succession , he therefore supported the French candidate against the Spanish-Habsburg candidate.

But as the “father of Christians”, as he saw himself, he otherwise tried to be as neutral as possible in European conflicts . But he took no effective measures against the power politics of the French Cardinal and First Minister Richelieu . Only the alliance between France and the Protestant leading power Sweden in 1631 openly tried to prevent.

When the troops of the Catholic League with 26,800 soldiers under the commanders Pappenheim and Tilly stormed the city ​​of Magdeburg on May 20, 1631 , all residents, without exception of gender, were declared outlaws. There were days of raids, rapes and murders in which more than 20,000 citizens were killed. The whole of Europe was appalled by this massacre, and it is considered to be the biggest and worst of the Thirty Years War. It was said that the horror of the deeds and the horror “cannot be put into words and cannot be weeped with tears”. Pope Urban VIII, on the other hand, wrote a letter on June 24, 1631 in which he expressed his joy at the "destruction of the heretic's nest".

His wastefulness increased the deficit of the Papal States from 16 million Scudi at the time of his inauguration to 35 million in 1640. Therefore, in 1636 members of the Spanish fraction of the College of Cardinals planned his dismissal, possibly even assassination, in order to elect Laudivio Zacchia as his successor. When Urban left for Castel Gandolfo, conspiratorial meetings were held in Rome. However, after this had been revealed to him, he returned immediately, convened a consistory and demanded explanations; then he expelled all cardinals from Rome. 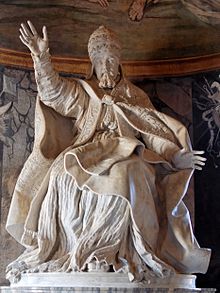 The Roman people, who suffered from the indulgent extravagances of Urban VIII, are said to have burst into stormy jubilation at the news of his death on July 29, 1644. He was buried in a magnificent tomb in St. Peter immediately to the right of the Cathedra Petri , which is one of Bernini's masterpieces. His successor Innocent X brought the nephews of Urban VIII to account, but they fled to France to see Cardinal Mazarin , at whose influence the trial was put down in 1646.