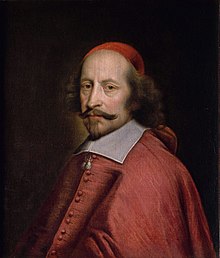 Jules Mazarin , actually Giulio Mazarini (born July 14, 1602 in Pescina , Kingdom of Naples , † March 9, 1661 in Vincennes Castle , France ), was a French diplomat and cardinal of Italian descent, since 1659 Duke of Nevers and Rethel and from 1642 to 1661 ruling minister of France to succeed Cardinal Richelieu .

Mazarin came from an ambitious family. His father was Pietro Mazarini, a hat maker from Palermo who had gone bankrupt to Rome, where one of his brothers had already made a name for himself as a Jesuit. In Rome, Pietro rose to the position of artistic director of the connectable Marc Antonio Colonna , who married him to his goddaughter Ortensia Bufalini. She became Jules' mother, who was still called Giulio when he was born in an abbey in Piscina. More siblings followed:

From 1609 to 1619 he attended the Jesuit college in Rome, where he was already considered a child prodigy at the age of five, as he was able to recite the sermons by heart almost immediately. As treasurer of Abbé Colonna, son of the Connectable, he accompanied him at the age of 17 to the University of Alcalá in Spain and began studying law at the University of Salamanca , where he was noticed, among other things, by his great passion for cards and dice.

In 1622 he received his doctorate in Rome and two years later entered the service of Pope Urban VIII , where he assisted papal legates in diplomatic missions. From 1634 to 1636 he worked as papal nuncio in Paris before he entered the service of Cardinal Richelieu in 1640 and was appointed cardinal the following year .

After the death of Richelieu in 1642 Mazarin took over his office as governing minister and kept it as after the death of Louis XIII. (1643) whose widow Anna of Austria exercised the reign for the still underage King Louis XIV . The cardinal, to whom even his enemies attested a seductive appearance and a captivating demeanor, acted as tutor to Louis XIV, of whom he was godfather. Even after Louis XIV was declared of legal age in 1651 and crowned in 1654, Mazarin remained in office.

Mazarin was extremely successful in foreign policy. In the negotiations for the Peace of Westphalia in Münster in 1648, he achieved significant territorial gains and influence for France, as well as in the Peace of Pyrenees in 1659 with Spain. France thus rose to become the leading continental European power. In 1658 he brought the Rhine Confederation in western Germany, the Netherlands and Sweden under French influence.

Domestically he was initially little active because of the Thirty Years War . He continued Richelieu's absolutist policy; H. Mazarin restricted the rights of the "Parlement" called Supreme Courts and curtailed the feudal rights of the high nobility . He reacted too late when the growing opposition escalated into armed uprisings, the Fronde , in 1648 . It was not until 1653 that, after fleeing twice abroad, he succeeded in overthrowing the opposition of the nobility and high judges and in re-establishing and further strengthening the position of the crown. After Mazarin's death, Louis XIV personally took over the rule.

Mazarin was an avid book lover throughout his life and built up a private library. This comprised more than 5,000 works that were bequeathed to the Collège des Quatre Nations in Paris after his death , which later became the oldest public library in France, the Bibliothèque Mazarine . Mazarin also had his own palace built in Paris, which housed collections and galleries. He was not lacking in wealth; just from his ecclesiastical offices he could fall back on the income of sixty abbeys and the Archdiocese of Reims .

After the conclusion of the Peace of the Pyrenees in 1659, King Mazarin gave a lordship in Upper Alsace ( Pfirt , Altkirch and Thann ); in the same year he acquired from Carlo III. Gonzaga , Duke of Mantua, the duchies of Nevers and Rethel and then called himself Duke of Mayenne.

Mazarin brought his nephews and nieces to Paris until 1653, where they lived in the Palais Royal and were brought up with the king. The girls were called mazarinettes . When they were presented at court, Marshal Villeroy made the prophetic saying: "Little girls who have nothing and will have everything, locks, pensions, diamonds and silver dishes."

Cardinal Jules Mazarin in his palace