The title of this article is ambiguous. Further meanings are listed under Altkirch (disambiguation) .

Altkirch ( Alsatian Àltkìrech ) is a French town with 5737 inhabitants (as of January 1, 2017) in the Haut-Rhin department in the Grand Est region . The city is the seat of the sub-prefecture ( sous-préfecture ) of the arrondissement Altkirch , which consists of four cantons , it is the main town ( chef-lieu ) of the canton Altkirch and the municipality association Sundgau .

Altkirch is located on a hill above the river Ill and is the central place of the Sundgau in southern Alsace . After Basel in the east is about 30 kilometers to Belfort in the west about 42 kilometers, according to Mulhouse in the north about 19 kilometers.

The place was first mentioned in 1102 and received city rights in the 13th century. In 1324 Altkirch fell into the possession of the House of Habsburg through marriage ; after the Peace of Westphalia (1648) it belonged  to France - with an interruption from 1871 to 1918 . In 1659, Altkirch passed into the possession of Cardinal Mazarin as a gift from King Louis XIV .

Around 1900 Altkirch had a Catholic church, a Protestant church, a synagogue , a grammar school , a district court and a main customs office .

Altkirch is considered a place of pilgrimage , as it is the home and burial place of the regional saint Morandus . In addition to the Gothic stone grave of the Benedictine, the pilgrimage church also houses his valuable reliquary from 1428.

→ Main article : List of the Monuments historiques in Altkirch

The Sundgau Museum is located in a Renaissance building and shows furniture from Alsace and works by the regional artist Jean Jacques Henner . 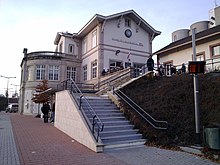 Altkirch has had a station ⊙ on the Paris – Mulhouse line since October 15, 1857. From 1891, the Altkirch – Ferrette line branched off here . Passenger traffic on this route was discontinued in 1951, freight traffic in 1968. Intercités trains stopped in Altkirch until December 2011 , with the commissioning of LGV Rhin-Rhône only TER Alsace and TER Franche-Comté trains stop. 47.627282 7.239187

Altkirch has had partnerships with Le Thor in the Vaucluse (France) department since 1991 and with San Daniele del Friuli in the Friuli-Venezia Giulia region (Italy) since 1994.

Municipalities in the Arrondissement of Altkirch