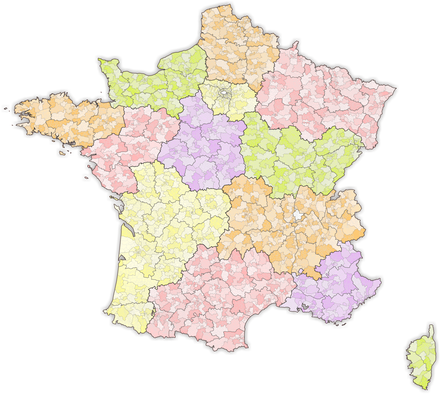 The French cantons (except overseas territories)

A canton (canton) in France is an electoral district for the election of the Départementrat and accordingly a subdivision of a Département for this purpose .

The seat of the central election office ( Bureau centralisateur ) of a canton is often the seat of lower state or departmental authorities or their branch offices. There is at least one Gendarmerie nationale station in every rural canton .

For the elections of the department councils on 22./29. March 2015 the number of cantons was reduced by almost half. The basis for this was the reform of the election of the departmental councils from 2013. This changed the electoral system so that in future a man and a woman should be elected as members of the departmental council in each canton. As a result, in every department - except Paris , the metropolis of Lyon , French Guiana and Martinique - the number of cantons had to be reduced by half, this number being rounded up to the next odd number, and every department with more than 500,000 inhabitants should include at least 17 cantons and each department with more than 150,000 inhabitants at least 13. In implementation of this law, the delimitations of the new cantons were determined by decrees of the State Council in February 2014 , so that the area of ​​the 98 affected departments is now divided into 2054 cantons. The cantons in Martinique, Guayana and the metropolis of Lyon that had become inoperative remained unchanged.

A canton can extend over

In Paris, where the city is identical to the département, there are no cantons. The Conseil de Paris , which is both a city councilor and a departmental council, is elected through the Paris arrondissements according to local elections. Since there is no election to the Départementrat, the cantons are not necessary as electoral districts here.

For statistical purposes only, some of the Paris arrondissements are treated as cantons.