This article describes the French postal routing system, for which in Quebec see ZIP code (Canada) .

The code Postal is the French postal code . Since 1972 the code has consisted of five digits, of which the first two correspond to the ordinal number of the department .

In France, postcodes were introduced on January 1, 1965. The department numbers, which have been changed or supplemented in some cases, have been used for a long time in the administration and organization of the postal service. The French postcodes were two-digit at that time and were formed by the digits 01 to 95. As early as October 26th of the same year, the PTT Post and Telegraph Administration added the postcode; the department number and then the first three letters of the place name had to be capitalized in front of the place name, for example:

The five-digit system used today was introduced on June 3, 1972. 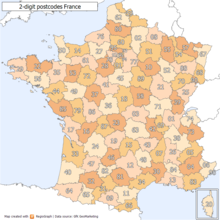 Postcode areas in France after the first two digits

In France métropolitaine, the first two digits of the Postal code stand for the number of the department .

Corsica is an exception to this rule . Since there are no letters in the Postal Code, the two departments share the prefix 20, which was also the number of the department before the island was divided into two departments in 1976, instead of using the department codes 2A and 2B used today. In the course of the division there was an extensive renumbering of the postcodes so that Corse-du-Sud with 201XX and Haute-Corse with 202XX can already be distinguished by the number - with the exception of Ajaccio (retained as a prefecture of 20,000) and special services (Solenzara army base or similar).

The code Postal for the main towns of the departments ( prefectures ) usually ends with three zeros , for example 06000 Nice for Nice . In Corsica this could only be set up with one of the two prefectures: the previous Ajaccio prefecture kept the 20,000, although otherwise the entire department of Corse-du-Sud received 201XX; Bastia is an exception here and is a prefecture with 20200 without a XX000 postcode.

Another very rare exception are individual municipalities that are close to a department border and are supplied by a post office in the neighboring department. In this case, the first digits of the Postal Code do not come from your own department, but from the department of the post office. For example, the Postal code of the municipality of Riboux is 13780, although it is not in the Bouches-du-Rhône (13) but in the Var (83).

In Paris , the last two digits denote the 20 arrondissements , for example 75008 Paris = Paris VIII e . Corresponding regulations apply to the large cities of Marseille and Lyon , which are also divided into urban arrondissements.

A postcode that does not end in zero , apart from the exceptions mentioned above , refers to a special code of the CEDEX service ( Courrier d'Entreprise à Distribution EXceptionnelle ) for institutions with particularly high mail volumes. The bulk recipient is assigned a unique three-digit number that is appended to the department code.

In the overseas departments , whose department codes are three-digit, the first three digits designate the department.

Postcodes are not used for the French Southern and Antarctic Lands.

The French code Postal system is also used in Monaco .