The Var [ vaʀ ] is the French department with the atomic number 83. It is in the southeast of the country in the region Provence-Alpes-Cote d'Azur and is after the river Var named, which no longer belongs to the department, however, since 1859 .

The department bordering on the east is Alpes-Maritimes , the Bouches-du-Rhône on the west . The northern border is the Alpes-de-Haute-Provence department , and the Vaucluse department in the northwest over a length of a few hundred meters . The south of the department is formed by the Mediterranean coast with the western Côte d'Azur .

Description: In gold, a fallen blue tip with a golden lily . A red three-legged tournament collar is close to the head of the shield.

The department was created in 1790 from parts of the former county of Provence and originally extended to the river Var of the same name , after which the department is named. The nine districts of the department were Barjols , Brignoles , Draguignan , Fréjus , Grasse , Hyères , Saint-Maximin , Saint-Paul-de-Vence , Toulon .

The Var river basin has not been part of the department since 1859. In that year Italy ceded the County of Nice to France, among other things , whereupon the Arrondissement Grasse ( Antibes , Cannes , Grasse ) with the River Var was separated from the Département Var in order to re-establish the Département Alpes-Maritimes together with the County of Nice . The seat of the prefecture changed several times: 1790 Toulon , 1793 Grasse, 1795 Brignoles , 1797 Draguignan . Since 1974, Toulon is again the seat of the prefecture of the department.

Some of the bigger and better known places in the Var include: 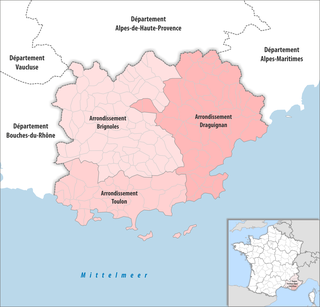 Communes and arrondissements in the Var department

The main source of income, as in most of the departments on the Mediterranean coast, is tourism. The vineyards and wine cellars in Bandol , hikes in the Esterel , windsurfing and kite surfing on the Presqu'île de Giens as well as excursions to the islands of Porquerolles and Port-Cros are among the special attractions . The longest sandy beach in the region is the beach of Cavalaire-sur-Mer , the most famous is probably the Gulf of Saint-Tropez . In the Haute-Var, the north of the department, are the high-altitude Provencal villages of the Pays de Fayence ( Montauroux , Fayence , Callian , Seillans , Tourrettes , Saint-Paul-en-Forêt , Tanneron ) and the impressive nature of the Verdon Gorge and the Lac de Sainte-Croix .

In agricultural production, flowers, fruit, vegetables and wine are traditionally grown. About 800 km², that is 13% of the area, are used for agriculture. There are also around 10 km² in which horticulture is practiced. With an annual production of 500 million flowers, the Var department is the largest producer of cut flowers in France. Other important products are figs (80% of French production), olives (25% of French production) and honey . In the livestock sector, mainly sheep (50,000 animals) and goats (4,200 animals) are kept.

Almost half of the agricultural area is used for viticulture. The annual production is 150 million liters, with predominantly rosé wine being produced. A large part of the Côtes de Provence wine-growing region , which has had the status of an Appellation d'Origine Contrôlée (AOC) since 1977 , is located in the Var department. Embedded in the appellation is the Coteaux Varois en Provence wine-growing region , which has had its own AOC since 1993. The AOC Bandol in the southwest of the department has existed since 1941.

The local radio station France Bleu Provence broadcasts in the departments of Var and Bouches-du-Rhône.

The climate in the department is a distinctive, warm Mediterranean climate . Toulon is statistically the warmest and sunniest city in mainland France.

On June 16, 2010, 350 liters of precipitation per square meter fell within a few hours at certain locations, as much as usual in several months. The heavy rains are called "épisodes cévenols" because this type of weather occurs frequently in the Cevennes . There was severe flooding around the city of Draguignan. The state of disaster was declared. In future, strict care should be taken to ensure that no more construction is carried out in floodplain areas.

Departments in the region d'Azur Provence-Alpes-Cote