The title of this article is ambiguous. Further meanings are listed under Hyères (disambiguation) .

Hyères [ jɛːʀ ] (also: Hyères-les-Palmiers , Provencal Ieras [ ˈjeɾɔ ] or Iero [ ˈjeɾɔ ]) is a French commune and port town with 55,588 inhabitants (as of January 1, 2017) on the Mediterranean coast in the Var department in the Provence region -Alpes-Cote d'Azur . Hyères is the capital of the canton of Hyères and is partly part of the canton of La Crau in the arrondissement of Toulon .

The city is located on the south side of the mountain range Les Maurettes , part of the Massif des Maures , at the base of the peninsula of Giens . The Îles d'Hyères , which geologically also belong to the Moors massif, lie in front of the city and peninsula .

The headland that connects Giens with the mainland forms two extensive bays in front of the city with a total of 35 km of sandy beach , which also offers space for larger tourist flows. The bay of Almanarre is one of the most popular windsurfing and kiteboarding areas in France.

The area of ​​the municipality covers an area of ​​more than 132 km² and the towns of Les Salins, L'Ayguade, Les Borrels, Sauvebonne, Le Port, La Capte and Giens and the three island towns Porquerolles , Port-Cros and Le Levant, which are not directly connected to the urban area .

The climate in Hyères is a distinct Mediterranean climate with mild and humid winters and hot, dry summer months. In July, precipitation reaches its minimum with an average of significantly less than 10 mm, the average daily maximum temperatures reach 28 ° C in summer. The average low temperature reaches its minimum in January and February at 5 ° C.

The second determining factor of the climate in Hyères is the mistral . The city benefits from the dry and relatively cool northwest winds in several ways: On hot summer days, it softens the heat in the city, and provides a reliable basis for the surf and kite offerings in the bay. On the other hand, it increases the risk of fire due to its dryness and endangers smaller boats due to the unusually heavy swell that it can cause.

The area of ​​today's city of Hyères has been inhabited by humans for over 5,000 years. A cup stone on the hill of Castéou above the city testifies to this .

The first settlement in historical times dates from around the 4th century BC. BC, when Greek sailors established a fortified maritime trade office in the area known as the Almanarre , which they named Olbia ( the lucky one ). The place created there existed until the fall of the Roman Empire.

The current name of the city appears for the first time in the years 963 and 964 in two sources. A bull from Pope Leo VIII and a document from Conrad III. of Burgundy approved and confirmed the assignment of Hyères and its surroundings to the Benedictine Abbey of Montmajour . The documents mention the salt pans and the fishing grounds of the municipality called Eyras . After the Saracens were driven out by William I of Provence , the place, including the Îles d'Hyères, fell to the Lords of Fos in 972 , who had the castle built on the Colline de Castéou in the first half of the 11th century .

Hyères was the first place on the French Mediterranean to be visited by the English upper class in the late 18th century, making it one of the birthplaces of tourism in France . Regular guests to the city included Queen Victoria and Robert Louis Stevenson . Towards the end of the 19th century, luxury tourism shifted towards Nice , Cannes and Monte-Carlo .

Since the 1960s, Hyères has seen population growth well above average due to strong influx.

The ancient city of Olbia

The ancient city of Olbia is on the D 559 in the direction of Carqueiranne . Greek navigators built in the 4th century BC The fortified trading post of Olbia with a port on the Gulf of Giens. Small, fortified port ports of this type were part of the defense strategy to ward off attacks by Gallic pirates on Greek merchant ships. In the first century BC The Romans took over Olbia. The port was named Pomponiana, but did not lose any of its economic importance. With the fall of the Roman Empire , Olbia also lost its importance. In 578, Guntram I , king of the Franks, destroyed the settlement . At the beginning of the 13th century, 600 years after the decline of the ancient city, a Cistercian abbey was built, which was abandoned in the 14th century. The ruins of the ancient city are now the site of archaeological excavations and can be visited with an expert guide.

Alley in the old town 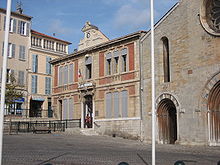 The medieval old town is well preserved. With its location on the slope of the Casteou, one of the foothills of the Maurettes, it dominates the lower level and offers a wide view of the sea and the offshore islands. Some structures are classified as monument historique :

For its numerous green areas, gardens and parks, Hyères was awarded a ville fleurie ( city ​​in bloom ) and received a gold medal in the European competition .

The Tour Fondue fortress in the south of the Giens peninsula

The area of ​​Hyères includes the peninsula of Giens and the offshore Îles d'Hyeres, which not only offer a wide range of bathing and sports tourism, but also have a cultural heritage that is worth seeing.

Hyères maintains town twinning with Rottweil in Baden-Württemberg and Koekelberg in Belgium .

The town twinning with Rottweil was decided in 1970 and goes back to contacts of Rottweiler war returnees with the Anciens combattants prisonniers de guerre from Hyères. The partnership with Koekelberg was sealed in 1977.

One of the most important activities of the town twinning is the regular student exchange between the schools in the communities.

The agriculture is the vegetables - and viticulture determined.

The Toulon-Hyères International Airport (TLN) (La Palyvestre) is located four kilometers southeast of the city center on a sandy plain near the coast. As early as the beginning of the 20th century, the area was used as an airfield for private flights. When the marshland was drained in the 1920s, the French Air Force began using the area and eventually took it over as an official base and military airfield . The airport has been used commercially again since 1966, but the army remained present in the area. In 2012 there are direct flights to and from Nantes , Bordeaux , Rotterdam , Tunis , Brest , London , Brussels and Paris .

Hyères is the end of a short railway line from Toulon . A pair of TGV trains runs here every day on a continuation of the LGV Méditerranée high-speed line , which connects the city with Paris in four and a half hours . From Hyères via Toulon to the start of the high-speed line, the TGV runs on a normal-speed line. There are also local transport connections ( Transport express régional ) to Toulon and Marseille.

Communes in the Arrondissement of Toulon