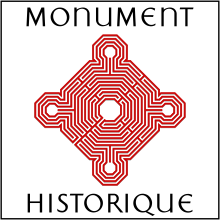 Logo (the maze of Reims Cathedral )

In France the classification as a monument historique ( "historical monument") a measure to a remarkable due to its history or architecture building as a monument to protect. The recognized public interest relates to the historical or art-historical significance of the monument.

The classification can also refer to movable objects, for example furniture or objects that are assigned to a certain environment in which there is a historical interest, such as bells, chalices or door fittings.

Definition as Classé or Inscrit

There are two levels of protection:

The difference between the two levels of protection lies essentially

In France, classification and registration are regulated by Title II of the Code du patrimoine , which formally replaces and modernises the law of February 25, 1943, which in turn modified a law of December 31, 1913 and a so-called “field of vision” (Champ de visibilité) of 500 meters into French law. This means that every landscape and every building in this area is also subject to special rules, especially when it comes to redesign or redesign. The law stipulates that every property belongs to the Champ de Visibilité that can be seen from the monument or at the same time as the monument and that it is within a distance of a maximum of 500 meters - which, according to case law, is a radius around the monument.

Work on the inventory of the historical monuments began in France on the part of the state as early as 1830 with the appointment of Ludovic Vitet as Inspecteur général des monuments historiques ("Inspector General of the Historical Monuments"). He was followed in 1834 by the poet Prosper Mérimée , who was in constant contact, for example, with the archaeologist Jules Quicherat or the architect Eugène Viollet-le-Duc .

In 1851 the commission des monumentes historiques initiated a photographic exploration with the mission heliographique .

Today in France there are around 44,000 structures protected by the List of Monuments Historiques . The Ministry of Culture , which maintains Base Mérimée , is responsible for this .

The classification can be initiated by anyone, from public bodies as well as private ones, especially of course by the owners. The preferred contact person for the classification and the control of compliance with the guidelines for recorded objects is the corps des Architectes des Bâtiments de France ( ABF ).

The classification dossier is usually created by people who belong to the Direction régionale des affaires culturelles ( DRAC ) in the department of the Ministry of Culture . It consists of a documentation section that contains detailed information about the building (history, urban situation, legal facts), as well as photos and plans.

The dossier drawn up is submitted to the Commission régionale du patrimoine historique, archéologique et ethnologique (COREPHAE), which is composed of 30 people and is chaired by the Prefect of the region.

The prefect drafts an ordinance to include the object in the list and then forwards the dossier to the ministry. The Commission supérieure des monuments historiques there now has two options: to be included in the list of classified objects or, if that is not an option, to propose an entry in the inventaire supplémentaire . The final decision rests with the minister.

Consequences of the classification

Conservation measures and construction projects in the area

Works to maintain the building, repair and restoration can be financially supported by the state, which does not exclude support from other sources. The approved work on a protected building is carried out by the owner with the assistance of architects and contractors of his choice. State support is limited to 40 percent of the total cost.

The approved work on a protected structure is supervised by the administration. In the case of financial support from the state, recourse to a senior architect who is familiar with the historical buildings in the region is mandatory.

New construction, restoration and demolition of buildings within the Champ de Visibilité require the prior approval of the Architecte des bâtiments de France (ABF). In practice it is irrelevant whether these measures can actually be seen from the Monument Historique or not; as soon as it is in the area of ​​the protection zone, the ABF has absolute decision-making power.

This has far-reaching consequences for all construction projects in the area: