Monument still hidden in the ground: floor plan of a Gallo-Roman warehouse

A monument ( plural monuments or memorials ) in the broader sense is a testimony to cultural history .

This is to be distinguished from the memorial in the narrower sense, i.e. the memorial as an artistic work of remembrance of a person or an event. For the conceptual history of the word see monument .

Use of the term in the field of monument protection 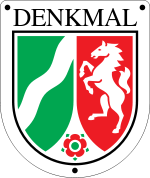 Marking of monuments in North Rhine-Westphalia

Monument became the general term for objects of cultural history worthy of protection. The type of monument is often specified in more detail, for example cultural monument , art monument or architectural monument .

From the monument to the two key terms of dealing conduct with monuments from: conservation and historic preservation as the totality of all measures to preserve heritage worthy serve objects in the public interest, are anchored today legally in most states of the world by conservation laws. In some of the countries, no distinction is made between monuments and cultural assets. In Germany, depending on the federal state, the generic term monument or cultural monument is used. In the context of the preservation of monuments, protected as well as objects worthy of protection are recorded and listed.

The use of the generic term monument also applies to the federal law applicable throughout Austria regarding the protection of monuments due to their historical, artistic or other cultural significance .

Memorial was also from 1961 in the preservation of the GDR the generic term for who declared "evidence of political, cultural and economic development" (until 1961, as a cultural monument called).

Historic green spaces (e.g. gardens, avenues and dance linden trees ) can be protected as cultural and natural monuments at the same time , as the respective protection purposes are different.

In analogy to the formation of the term cultural monument , the term natural monument was formed and z. B. in the Saxon Home Protection Act of 1934, the law for the protection of art, cultural and natural monuments used. Even if a monument that has grown up was not erected as a monument, it is usually given a monument value by the passage of time if it thus becomes a testimony . Such analogies are also chosen for protected landscape elements such as caves , striking and old trees , species-rich natural areas, fossils and other naturally created objects.

Both cultural monuments, art monuments and architectural monuments are considered cultural assets and are threatened in many countries by natural disasters , wars , terrorist attacks or other emergencies. The international partner for the protection of these monuments is the organization Blue Shield International according to the Hague Convention for the Protection of Cultural Property of 1954 and its 2nd Protocol of 1999 . There is also intensive cooperation between the United Nations , UNESCO and Blue Shield. The employees of Blue Shield and its national organizations, for example, despite the partial dissolution of state structures and the very unclear security situation as a result of the wars and unrest in Iraq, Syria, Mali, Egypt and Libya, have robust undertakings to protect the monuments there and cultural goods carried out. This also applies to the survey of monuments or other cultural assets to be protected, the creation of "no-strike lists" (- which contain the coordinates of significant cultural monuments), the linking of civil and military structures and the training of local military personnel with regard to the protection of cultural assets. For reasons of legal protection for monument preservers, there are many international partnerships with local Blue Shield organizations. According to Blue Shield, it is fundamentally not enough just to develop and adopt international legal norms such as the Second Protocol to the Hague Convention for the Protection of Cultural Property in the Event of Armed Conflicts or the Doha Statement of the "Conference of 'Ulamâ on Islam and Cultural Heritage". Rather, it is necessary to implement and implement these standards effectively on a global basis.

Marking of the French Monument Historique

Even without any protection or recourse to legal definitions, monuments can be classified as follows or differentiated from one another:

According to the size of the monument

According to the type of monument

In terms of monument conservation, i.e. regardless of their protection status, monuments can belong to different types of monuments, which do not have to be mutually exclusive in the case of an object (a mill represents both an architectural monument and a technical monument ):

In the monument topography Federal Republic of Germany

Overviews of monuments in German-speaking countries