Woman and man in modern clothes.

As clothing (also clothing , in southern Germany , Austria and South Tyrol, garments , colloquially also clothes ), the entirety of all materials is referred to in a comprehensive sense, which as an artificial shell surrounds the human body more or less tightly (opposite: nudity ). On the one hand, clothing serves to protect against harmful environmental influences and / or dangers in the work environment, and on the other hand in their respective design of non-verbal communication. It has thus developed very differently depending on the culture and time , depending on the climatic, individual and fashionable needs of people. Shoes and headgear (for example helmets ) are counted as clothing, purely decorative objects, however, not, in the narrower sense neither accessories (as “accessories” to clothing).

According to the anthropologist Alexander Pashos, the historical point in time when people started wearing clothes can be estimated from the appearance of the clothes louse . Inferred from this, current genetic analyzes point to an origin around 75,000 years ago. Beyond that, however, there are also other views, according to which the ancestors of modern humans wore clothing up to around 650,000 years ago. From the Middle Paleolithic of Neumark-Nord , an approx. 200,000 year old site from the time of the Neanderthals on a former lakeshore near Frankleben in Saxony-Anhalt , comes a stone device with adhering residues of oak acid in a concentration that cannot occur naturally and therefore is interpreted as an indication of the tanning of animal hides.

One of the oldest cloaks was found in the Italian cave of Arene Candide . It consisted of about 400 strips of squirrel skin and is dated to an age of about 23,000 years.

The loss of fur in human evolution made it possible for humans to better regulate body temperature ( sweating ) in their warm habitats at that time . This increased his stamina to get food while hunting . With the invention of clothing, the associated disadvantage was compensated for. The possibility of using different degrees of thermal insulation clothing increases human flexibility to be able to stay in very different climatic zones.

The development of more specialized stone tools was a prerequisite for processing the surface of the skins in such a way that they could be used as clothing (if necessary also depilated as leather ). It is possible that skins were first used as the first primitive sunscreen and later evolved into tents before being used as clothing. The use of fur clothing components as a status symbol of the successful hunter, and thus often also of the group leader, may also have played a role very early on; the use of this type in hot areas, which was still common up to modern times, suggests this. The effectiveness of clothing was significantly increased by the invention of sewing, as clothing could now be closed and adapted to the human body. With sewn clothing, it was possible for humans to permanently colonize even very cold regions such as northern Canada, Greenland and northern Siberia (e.g. Eskimos ). With the domestication of sheep in the early Neolithic and the invention of weaving , wool could now also be used as a raw material for textiles. In addition to sewing as a permanent closure, the closing of throw-over clothing could now also be carried out when in use with robe needles , later fibulae and buckles , and even later with buttons .

The oldest evidence of vegetable raw materials as materials for textile production (e.g. linen and hemp ) is z. B. dated for linen to a period of 36,000 to 31,000 years.

Archaeological finds of chemical relics of the silk protein fibroin in two 8,500-year-old graves suggest that the Neolithic inhabitants of Jianhu already woven the silk fibers into fabrics.

The clothing style was already subject to fashion in the early advanced cultures and antiquity . Mesopotamian terracottas, especially those with clothed women, have been preserved in large numbers as mass-produced products and show the current fashion. They are therefore also regarded as a kind of "fashion lexicon of the times".

The clothing in the Middle Ages reflected the place within the medieval class order . The only differences between the stands were mostly in the material used and the associated decorations. Available materials for textile production for the lower classes were linen, hemp, nettle (these three especially for use in underwear) and sheep's wool (these especially for outerwear ). The higher class could also buy expensive imported fabrics (for example made of silk , especially valuable dyed purple ), better textile qualities and refined cloths.

Cotton and new machines for its preparation and processing (spinning, weaving) were the most important impulses for the beginning of the industrial revolution . Cotton processing accounted for about 8 percent of the UK's gross domestic product in 1830 and led to the explosive growth of cities where the cotton industry developed (e.g. Manchester ).

Clothing reform, 2nd half of the 19th century

In the context of the life reform movements, there were several attempts to reform clothing in Germany in the second half of the 19th century , the first considerations relating to men's clothing. There was fierce controversy over the question of which material is particularly beneficial for health. Gustav Jäger thought only wool was suitable, while Heinrich Lahmann advocated cotton and Sebastian Kneipp especially linen. Jäger founded his own clothing company for the so-called normal clothing he designed for men, which was quite successful on the market for several decades, in German-speaking countries and also in England. He founded his own association and published a monthly magazine.

Clothing should protect people from hypothermia and frostbite (from cold, moisture, wind) and from heat damage or sunburn (from thermal radiation and UV light ) and at the same time not hinder the evaporation of sweat when sweating . Further protection against particular risks is offered by special, now mostly standardized, protective clothing such as the "bulletproof vest" , cut protection trousers for working with a chainsaw, heat protection clothing or chemical protection suits .

Inappropriate clothing can be hazardous to health:

In addition, clothing often also has a haptic or sensual experience function . Clothing is a luxury item or even a toy . This includes the sensual enjoyment of certain materials, shapes and colors and playing and experimenting with shapes, colors and materials. Examples: cuddling in soft materials and the erotic-sexually stimulating effect of lingerie or material fetishism (e.g. latex clothing ), as well as enjoying a graceful appearance.

The countries with the largest clothing production are China and Bangladesh .

In addition, clothing serves as a symbol and a means of communication that provides a wide range of statements / signals. A very simple form is the simple marking or identification as a noteworthy object; neon-colored safety vests of road workers are supposed to prevent a worker from being overlooked. The importance that clothing has in the life of an individual person is very different from individual to individual, also depending on the social environment (and the role expectations of the individual). For some it is an unimportant externality or pragmatic object of use, for others it is an essential part of their life.

Clothing often identifies the members of a group as belonging to this group . In sport, the jersey marks the wearer as a member of a team, just as the uniform once helped to differentiate friend and foe. Normally it only serves to distinguish it from other groups and says little about the characteristics of the group. This is clearly different with other group-specific clothing. In addition to sportswear in established club colors, examples of this are the presentation of professional roles, differences in rank ( e.g. uniform of the military) and class differences (the demarcation or affiliation with other social groups or individuals).

There are also significant differences in the type of importance that individuals attach to clothing. They are shown in the very different aspects to which the individual pays priority when choosing his clothing: fashion - brand , style, beauty awareness; Utility functionality ; Feel-good components. There can be very different motives behind this (each and / or): pragmatism , striving for pleasure, desire for integration through assimilation , expression of feelings and moods, desire for well-being, impressing behavior , expression of one's own lifestyle, social status , nonconformism , rebellion and much more.

Other marking functions of clothing are of an aesthetic nature (sometimes unconsciously): wanting to express oneself or decorating the wearer, but also aesthetic-ironic play and experimentation with established forms of labeling. This includes the identification component of the clothing of a certain scene , which, depending on the point of view , wants to be perceived as a subculture or  counterculture to the prevailing mainstream . This way, you can also see defective clothing, such as For example, torn leather jackets within the punk scene or patched jeans in the blues scene can be aesthetic and fulfilling for the wearer, while the general opinion describes the style of clothing as inadequate and ripped off . 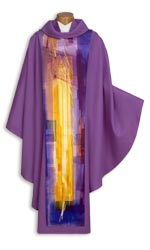 The reasons for the demarcation through clothing can be group-specific. So you can differentiate based on clothing:

Clothing can be gender-specific, age-specific and / or class / class / caste-specific. In the western industrialized countries, the different lifestyles justify the different forms of and demarcation through clothing. The scientific study of clothing is carried out by folklore clothing research.

Clothing is grouped according to various criteria, among others:

According to the occasion

Artistic gymnast in a leotard

According to social position

see also above under the section "Importance of clothing", subsection "Social importance - means of communication"

Short overall made of latex

According to a special function

According to position on the body 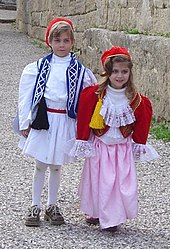 According to the seasons

Designations in the German-speaking textile industry

In order to facilitate the selection and care of clothing, some information is usually given in or on the ready- made garment: