This article deals generally with wool as an animal product. For other meanings, see wool (disambiguation) .

As wool after one calls Textile Labeling Act , the soft hair of the fur (as opposed to outer coat ) especially the sheep. In a broader sense, it also refers to spinnable hairs obtained from other mammals (e.g. goats, camel-like and angora rabbits), which are often provided with an animal-specific attachment (e.g. angora wool) or expressly as "hair" ( e.g. camel hair) impress.

Wool is a renewable raw material that has been used since the 4th millennium BC and, despite synthetic fibers and cotton , is still of great importance in the international economy.

The word for wool , which can be traced back to an Indo-European word stem, occurs in all Indo-European language families except Tocharian, e.g. B. in the Germanic languages English , Dutch , Swedish , Icelandic , but also in Baltic languages ( Lithuanian vìlna ) or in Celtic ( Cymrian gwlân ). In the Romance languages , such as Spanish Lana , French Laine , Portuguese Lã or Romanian Lână , there is hardly any resemblance to the Latin vellus . The possible relationship with the Latin vellere , which means “plucking” and refers back to the time when wool was not yet sheared, but rather plucked , has not yet been clarified . The Latin noun vellus (wool) is originally related to German fleece . Examples of extinct languages ​​are Old Norse ( ull ), Hittite ( hulana ), Old Indian ( ūrna ). 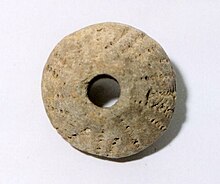 Wool in the narrower sense is a special type of hair (fleece type - the wool that is coherent in a flat piece after shearing) in domestic sheep , which has arisen from the fur of wild sheep in a long process of breeding changes . In Europe, sheep's use of wool finally established itself in the transition to the Bronze Age at the latest , after only plant fibers , especially flax fibers , had previously been used for textile production, as is shown by finds from Neolithic lake settlements in Switzerland from the 4th and 3rd millennia BC.
The development of the hair coat from the hair sheep (wild type) to the wool sheep took place in a long selection process with the following steps:

The prehistoric people who used sheepskins for clothing may have gradually learned in the Neolithic to make yarn and fabric out of the fur hair. The selective breeding of sheep then gradually eliminated the long and coarse hair of the protective outer layer, so that finally a fur was created that consisted only of the soft, insulating fleece of the former lower layer with its fine wool fibers.

The Middle East is considered to be the oldest area of ​​wool use . Since the 4th millennium BC there have been increasing references to the occurrence of woolly sheep, especially in sculptures from Mesopotamia . Much older, however, is a clay statuette from Tepe Sarab in western Iran ( Kermanshah valley), the interpretation of which as a woolen sheep is, however, disputed. It seems, however, that only in the course of the 6th and 5th millennium BC did a fleece develop through breeding and that hair and wool sheep continued to exist side by side for a long time. As early as the 4th millennium BC, sheep's use of wool was known far outside of Mesopotamia, as demonstrated by textile remains from the Nahal Mishmar cave in Palestine. Sumerian documents from the 3rd millennium BC then already list wool and milk as the most important products in sheep farming, and wool at that time was an independent use of sheep farming in the Far East.

Little is known about the beginnings of wool production and processing in Europe , as wool as an organic material does not last long in the soil under European climatic conditions, with the exception of the wet soil finds in lake settlements. There are therefore only archaeozoological findings available, which mainly relate to the newly emerging striking size difference of the skeletal remains of sheep compared to the previous sheep breeds. First of all, this applies to the finds in the Carpathian Basin in the period of the late Baden culture .

Replica of Gerumsmanteln (ie “cloak of Gerum”) in the Falbygdens Museum in Falköping , Västergötland , Sweden. The cloak was found in 1920 in the Hjortamossen moor on the Gerumsberget table mountain, Västergötland, Sweden. It is oval, measures 200 × 248 cm and is made of woolen fabric. The cloak is dated to the pre-Roman Iron Age.

In contrast to the sheep, the coat of the goats has only undergone few changes in breeding in the use of wool. Only the angora goat is an exception, and its fleece is similar to that of the woolen sheep. However, cashmere wool is only an undercoat that is combed out of the goats when the wool is changed, and the coat of the cashmere goat is only slightly changed compared to the bezoar goat . Little is known about the beginnings of the extraction and processing of goat wool.

The Woolsack in the former Irish House of Lords

For England in particular, wool production and processing has always been of great importance since the late Middle Ages, sometimes in competition with Flanders . Refugees from the Netherlands, who had fled the religious repression there by the Spanish, brought new wool technologies with them to England, especially worsted yarn production, and thus made England's already important wool industry the most important in Europe. The fact that the Lord Chancellor (or since 2006 the Lord Speaker ), who chairs the British House of Lords, does so on the Woolsack illustrates the early importance of the wool industry. Under the reign of Henry VII , the economy began to recover from 1485 after the horrors of the plague epidemic in England, mainly on the basis of wool and textile production and the trade and export of wool products. This importance continued later, and at times the wool industry in England was the only important one. While wool products were exported, food had to be imported, also because large agricultural areas were used as sheep pastures by the wealthy nobility. This led to strong social tensions and also promoted the hierarchization of English society economically. On the other hand, since the wool economy favored the advancement of individuals, English society remained more flexible than other European societies. New machine spinning and weaving technologies in the 18th and 19th centuries, analogous to cotton processing - in connection with the sharply increasing import of wool from the colonies, especially from Australia (1851: 30 million pounds) - led to new social upheavals and a rise of the trade unions .

In religious history, wool has taken on very different, even contradicting symbolic meanings. On the one hand, the cleaning power due to its absorbency was in the foreground and made wool fabrics the preferred material for sacrifice and cult. In this context, protective abilities were attributed to her, the power to avert disaster.
On the other hand, it was also considered unclean, as in ancient Egypt, with the Orphics and Pythagoreans , and priests were not allowed to wear woolen robes. On the other hand, the white of wool in Judaism could serve as an image of innocence (Isa. 1:18, Ps. 147:16). Lambs and rams were used as sacrificial animals. In the Middle Ages, wool was the preferred material for simple frocks in monastic communities. This also applies to Islam , where the Sufis may even be called suf after the Arabic word for woolen material . (But there are at least three other explanations.)

Physical and technical properties of the fiber

Wool quality assigned to the surface of a sheep (Ovis orientalis aries, cultivated form “Skudde”). The figure shows the wool quality with 1 for the best and 6 for the worst quality.

For example, cloth diaper covers made of wool can be around the child all night without the rest of the clothing being wet, as they keep the moisture in the diaper and can absorb some urine if necessary.

To obtain wool, the animals are sheared (new wool) or combed out, some breeds of sheep ( soay ) are plucked (this is painless for the animals, one carefully loosens only the almost loose hair).

Even the ancestors of the Incas made the finest yarns from the wool of the South American alpacas and the even rarer free living vicuñas. Even today, alpaca is considered a particularly high-quality yarn .

First the wool is washed, combed or carded , possibly bleached and / or dyed and spun into worsted or carded yarn . The wool to be spun is brought into a long, thin thread ( yarn ) by means of high-precision, electronically controlled spinning machines . This can be on substances weaving , for knitting (knitting) and knitwear use or is manually or mechanically to carpets made.

Consideration is being given to producing fertilizer pellets from wool that can not be used for textiles .

By type of manufacture

The terms new wool or pure new wool mean that it is new wool that comes directly from a living animal, and not a re-used, i.e. recycled product made from old textiles such as shredded wool or that slaughtered from the skins (Schwöde-, Schwitz- or Gerber's wool) or dead (death's wool) from animals. 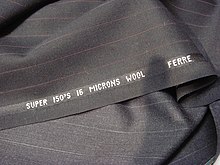 “Super 150”: 150 meters of the yarn used for this new wool material weighs one gram

QIVIUT :
The undercoat of the musk ox is QIVIUT and is difficult to spin because the hair lengths are low. It is processed from a very high quality wool.

Alpaca wool :
wool of alpacas keeps the heat five times better than sheep wool yarns. Microscopic air pockets keep it warm better than almost any other animal fiber. Alpaca does not contain lanolin and is therefore suitable for people who are allergic to wool . Alpaca wool is available in different tones from pure white to beige to all brown and reddish brown tones up to shades of gray and deep black. ("Alpaca" or wool see above)

Angora wool :
The hair of the angora rabbit is finer than that of the sheep. Angora wool is particularly soft and hardly puckered.

Merino possum wool : Merino possum wool is also
characterized by its very low weight and exceptionally good insulation properties. It is mainly produced and used in New Zealand. The production of this mixture helps to reduce the numbers of the undesirably numerous fox cusus (a possum species) that endanger the native flora and fauna .

Around 2.2 million tonnes of wool are produced annually in almost 100 countries worldwide, most of it in Australia, followed by China, New Zealand, Argentina, India, Great Britain and Northern Ireland with more than 50,000 tonnes per year (FAO 2009). Sheep wool production in Germany is around 8,000 tons. German wool has a difficult position on the world market, however, compared to New Zealand with its bright white, fine qualities, local producers can only compete poorly in terms of price and quality. A large part of the wool is processed in the clothing industry, while larger fractions are used for bedding, upholstery, carpets and fertilizer pellets.

The wool seal , English: Woolmark, is a quality mark for products made from pure new wool and a standardization in the quality labeling of textiles.