Romanian is a redirect to this article. Further meanings are listed under Romanian (disambiguation) .

Romanian is a Romance language and thus part of the Italian branch of the Indo-European language family . Romanian is in the broader sense an umbrella term for the four languages Dakor- Romanian , Aromanian , Meglenor- Romanian and Istror- Romanian and in the narrower sense only means Dakor-Romanian. The four languages, together with the extinct Dalmatian, form the group of Balkan Romance languages . (Dako) Romanian is the official language of Romania and the Republic of Moldova . In total, it is spoken by 34 million people, around 30 million of whom are native speakers. In the Republic of Moldova, Romanian was referred to as “ Moldovan ” from 1994 to 2013 , which the Transnistria region continues to adhere to. 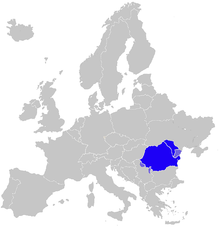 Romanian is the easternmost Romance language. It is derived from the Latin spoken in the Roman provinces of Dacia and Moesia , i.e. H. north or south of the Danube. The short period of Roman rule in Dacia from AD 107 to AD 271 is not sufficient to explain the development of Romanian in this area. Both the more Romanized areas south of the Danube, which remained under Roman rule, as well as the strong economic and cultural contacts of the population remaining in Dacia with the Roman-Byzantine Empire must be taken into account. Other important influences on Romanian are the Thracodacian substratum and membership of the Balkan language union .

Until 1862, Romanian was written in the Cyrillic script . The Transylvanian School developed the Latin writing system with special characters, which is still used today, over several intermediate stages . In the Transnistrian Moldavian Autonomous Socialist Soviet Republic , founded in 1924, Romanian was written in Cyrillic letters again from 1930, as was the case in the Socialist Soviet Republic, which was expanded to include Romanian territories to form the Moldavian SSR in 1940, until its fall in 1989, which the breakaway region of Transnistria still holds today.

Most letters correspond to exactly one sound. The letters in brackets only appear in loan words. 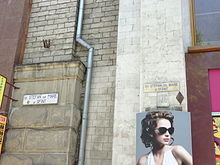 Example of the confusion surrounding the development of Romanian spelling and diacritics: on the right the old street sign with the new spelling of the word sfânt 'Heilig' and the auxiliary letter Ş , on the left the new sign with the old spelling “sfînt” and the correct letter Ș

Before the introduction of Unicode version 3.0 (September 1999), the makeshift letters Ş ş and Ţ ţ were used instead of the letters Șș and .

At the beginning of the writing, Romanian had significantly more special characters than today, as an attempt was made to preserve the etymology . However, since the general population did not speak Latin, there were great difficulties with the correct use of the special characters, which is why a largely phonetic spelling was introduced in 1904, which was repeatedly reformed until 1993:

According to the regulation that has been in effect since 1993, î is written at the beginning and end of the word and â in the middle of the word if it is not a compound word .

The following table shows the Romanian letters whose pronunciation differs from the German:

These four gliding sounds form a total of 22 diphthongs and 11 triphthongs :

With this inventory of sounds, Romanian can be characterized as a very diphthong and triphthong-rich language.

Romanian is the only Romance language that still partially has a declension with the cases nominative , genitive , dative , accusative and vocative . However, it is controversial within Romance studies whether the case inflection is a direct continuation of the Latin relationships or whether it represents a new formation. The written tradition of Romanian only from the 16th century contributes to this uncertainty. Due to pronounced syncretisms , many cases of nouns are not formally differentiated or only marked by articles:

Romanian is the only Romance language spoken today that, in addition to the masculine and feminine, has a fully developed third nominal class. Traditionally, this is called a neuter , but has no form of its own; Instead, Romanian neutrals are ambiguous: in the singular they appear as masculine and in the plural as feminine. All adjectives only know masculine and feminine forms: un scaun înalt 'one high chair', but două scaune înalte 'two high chairs'.

As is customary for languages ​​with many neighboring languages, Romanian has borrowed words from all directions and from all lexical areas. The vocabulary is structured as follows according to origin:

According to various other studies, more than 60%, in most cases even more than 80% of words are inherited from Latin in general usage . Less than 10% are therefore of Slavic origin.

The Romanian language developed from Vulgar Latin and accordingly has many words of Latin origin. Word similarity is currently estimated at 77% with Italian , 75% with French , 73% with Catalan , 72% with Portuguese and Romansh , and 71% with Spanish .

In order to enable a comparison of the similarities and differences of the modern Romance languages, the sentence "She always closes the window before eating / before she eats" follows in the respective language as well as in Latin.

Some common Roman roots are not recorded in Romanian:

For historical reasons, Romanian, especially that of previous centuries, has several borrowings from other languages.

Interestingly, Romanian and Albanian share a supposedly very old layer of words, some of which are typical of remote grazing . These are not necessarily borrowings from Albanian, but rather words that Romanian has borrowed from a preliminary stage of Albanian, which, however, cannot be reliably identified. Examples:

Especially the South Slavic languages and especially the Central Bulgarian language have borrowed many words from Romanian. This influence is particularly evident in the field of religion through the common Orthodox religion, but also in the field of family and love. One can therefore assume for the Middle Ages a strong mixture of speakers of Romanian and Slavic through marriage:

Under the influence of the Byzantine Empire , Middle Greek words were also adopted into Romanian from the 6th century :

Some modern Greek words were also borrowed , especially during the rule of the Phanariots :

The number of loanwords from the neighboring language Hungarian varies greatly from region to region: In Transylvania there are many colloquial words that have not found their way into the Romanian high-level language. Hungarian loanwords in general vocabulary include:

Romanian has several layers of borrowings from the Turkic languages , e.g. B.

As in every language, there are also words in Romanian whose origins cannot be explained either from the Latin genome or from contact with later languages. It is possible that such words are substratum from older languages ​​that were spoken in the area of ​​today's Romania before the Latin colonization, such as Dacish . However, as these languages ​​are rarely used, it is seldom possible to assign these words to a specific language. Examples of such words in Romanian are:

The oldest document in Romanian is Neacșu's letter from 1521.

Old Romanian already shows most of the features of New Romanian. Here is a brief overview of the characteristics:

According to the system

Due to the fact that it is isolated from the other Romance languages, there are several special sound developments in the Romanian language. There are also some similarities, for example with the Italian language [kl]> [kj] (Lat. Cl arus> Rum. Chi ar, Ital. Chi aro = famous, actually) and with the Dalmatian language , e.g. B. [gn]> [mn] (Lat. Co gn atus> Rum. Cu mn at, Dalm. Co mn ut = brother-in-law).

Some of the notable shifts: