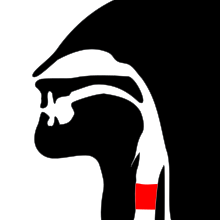 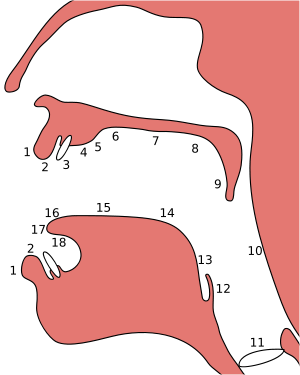 The glottal [⁠ ʔ ⁠] (engl. Glottal stop ), even glottal called, is an integral part of many varieties of standard German . The sound is a tense, glottal egressive plosive sound. It occurs when the vocal folds are closed and suddenly opened (see larynx ).

The German glottic stroke signals word and syllable boundaries and is also called a fixed voice insert . A well-known example of making oneself aware of the sound is the pair of words: travel [ fɛɐ̯ˈʀaɪ̯zn̩ ] and ice [ fɛɐ̯ˈʔaɪ̯zn̩ ]. However, since its occurrence where it is used can be predicted from the phonetic environment, it is usually not considered a German phoneme .

Glottal beat in other languages

Among the known languages, the glottic stroke occurs in Arabic (see Hamza ) and Danish ( Stød "Stoss") as well as in other Scandinavian languages ​​such as Swedish and Icelandic.

The sound is also an integral part of many English dialects, with the Cockney dialect deserving special mention. It is also becoming more widespread among educated speakers in the UK.

The volume [⁠ h ⁠] as in house is also a glottal. The sound is also generated in the glottis (glottis), but not as a closure as [⁠ ʔ ⁠] , but as a fricative (fricative / Enge sound). He is a tense, glottal, egressive angel, which is also generated in the vocal tract (attachment tube), which consists of the pharynx, nasal and oral cavities, due to strong air pressure .

[⁠ ɦ ⁠] is a non-tensioned, voiced , glottal, egressiver Enge According . He comes z. B. in Finnish , Dutch and Czech .

Sound designation according to the organ of articulation