In anatomy, the sagittal plane (from the Latin sagitta , arrow ) is a plane extending from top to bottom and back to front. When looking perpendicular (in the sense of orthogonal ) onto a sagittal plane, one sees a side view of the body. The associated adjective is called sagittal and corresponds to the meaning “running from front to back”. The anatomical term "sagittal" was coined by Gerhard von Cremona . 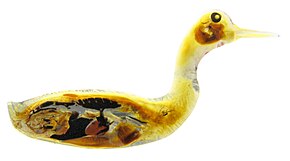 Microtome section of a bird in the sagittal or median plane

In the picture, the red area represents the sagittal plane through the middle of the body. This special case is called the median plane . This level divides the body exactly into a right and a left half. Among other things, in the acoustics of human hearing , the median level is important (→ Blauert bands ). The line on which the median plane intersects the surface of the body is called the median line or center line . The sternal lines (along the edges of the sternum ), the medioclavicular lines (through the middle of the collarbones ), the scapular line (through the shoulder blades ) and the paravertebral line (next to the spine) run parallel to this . designated.

Possible movements within a sagittal plane can be forwards or backwards and upwards or downwards.

In the radiology and especially the tomographic imaging play sagittal sections , either in a sagittal plane recorded or reconstructed image data is an important role. The tomographic examination in this plane results in the sagittal layers , with which the examined patient can be viewed "slice by slice" from one side of his body to the other.

Sagittal sections are z. B. used in the ultrasound measurement of the neck transparency in the context of prenatal diagnostics or for the representation of the spine with magnetic resonance or computed tomography .