This article deals with the bone, for the street of the same name in Hamburg see scapula

The shoulder blade (in Latin the scapula ) forms the rear part of the bony shoulder girdle in humans and the upper part in animals . In humans and other mammals, it is a flat , triangular bone. In birds it is narrow and saber-shaped. It is used to attach an arm (a front limb in four-legged friends , a wing in birds) and as a muscle origin and attachment . The connection to the chest is purely muscular (so-called synsarcosis , from the Greek syn 'together', sarcos 'meat'). There  is an articulated connection to the upper arm bone ( humerus ) and collarbone ( clavicula ) - in birds also to the coracoid . It serves to stabilize the shoulder joint and, thanks to its mobility, adapts to the movements of the upper arm. 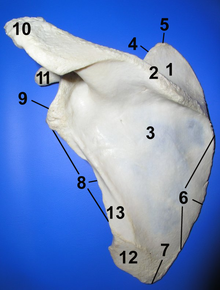 The back surface ( Facies dorsalis ) of the shoulder blade (in animals called the side surface - Facies lateralis ) is divided into two pits by the scapulae ( Spina scapulae ): the smaller supraspinous fossa and the larger infraspinate fossa . The origin of the supraspinatus muscle of the same name lies in the supraspinate fossa . The infraspinate fossa located below the spina is largely covered by the infraspinatus muscle , which originates in the two thirds of the pit located in the middle. To the side of this lies the origin of the teres major and the teres minor muscles .

The ventral surface facing the ribs ( facies ventralis or costalis ) of the scapula shows an extensive concave pit, the subscapular fossa . The two thirds of this pit towards the middle are defined by oblique bone ridges that serve the origin of the subscapularis muscle . The fossa subscapularis is on the lower ( inferior angle (), and upper shoulder blade angle superior Angulus , Syn. Angulus medialis ) by smooth triangular areas from the inner edge ( medial separated). These are called facies serrata in animals and serve to insert the serratus anterior muscle .

The upper edge ( Margo superior ) is the shortest edge of the shoulder blade in humans. It runs from the superior angle to the base of the coracoid process (Latin: raven beak). In animals, on the other hand, it is significantly longer and points forward, which is why it is called the front edge ( Margo cranialis ). The clear scapular incision ( Incisura scapulae ) is located on the margin of the superior / cranialis and is spanned in humans by a ligament - the ligamentum transversum scapulae superius . The suprascapular nerve runs through this incision . The adjacent part of the superior margin serves as the insertion of the omohyoideus muscle .

In animals, this edge is directed backwards and is therefore called the rear edge ( Margo caudalis ). This is where the long head of the triceps brachii muscle, teres major and minor muscle and the forearm fascia tensor ( tensor fasciae antebrachii muscle ) arise .

The medial margin, which is located towards the center of the body or the spine, is the longest edge of the shoulder blade in humans. It runs from the angulus medialis to the angulus inferior . In animals, it faces the back ( Margo dorsalis ) and is the shortest of the three edges.

The upper shoulder blade angle ( Angulus superior , Syn. Angulus medialis ) is created by the meeting of the Margo medialis and Margo superior . It is thin, smooth and rounded and serves as an attachment to some fiber strands of the levator scapulae muscle .

In animals, it is called the anterior shoulder blade angle ( angulus cranialis ) and is located at the meeting of the front and back edges.

The lower shoulder blade angle ( Angulus inferior ) is created by the meeting of the Margo medialis and Margo lateralis . It's thick and rough. Its back surface serves as the origin for the teres major muscle and some fiber strands of the latissimus dorsi muscle .

In animals, this angle points backwards and is known as the caudal angle .

The lateral shoulder blade angle ( angulus lateralis ) is the most massive part of the shoulder blade and is also known as the "shoulder head". In animals it points downwards and is called the angulus ventralis . Here lies a flat, cartilage-covered joint socket, the glenoid cavity , which forms the shoulder joint with the head of the humerus .

The trapezius muscle attaches to the upper part of the spine and the deltoideus muscle to the lower part .

Part of the left collarbone (top left) and left shoulder blade of a person viewed from the left side of the body. In the middle the socket of the shoulder joint (glenoid), on the left above the raven-beak process, on the right the acromion.

The raven beak process ( processus coracoideus or processus coracoid ) is a strong, hook-shaped bony process of the scapula. It arises from the head of the shoulder blade head and first pulls towards the head and the middle of the body, and then swings to the abdomen and sideways. It tapers off on its way. At the coracoid process of the short head (spring short head ) of the biceps brachii and the muscle coracobrachialis . The pectoralis minor muscle and various ligaments also come into play here.

The coracoid process of mammals is a vestige of the Raven bone ( Os coracoideum ), which is still the strongest bone of the shoulder girdle in birds.

The upper surface ( Facies superior ) is roughened and, like the lateral edge of the acromion, serves as the origin for the muscle deltoideus . Here the bone lies directly under the skin and can be palpated as an anatomical reference point . In mammals with a collarbone , on the edge of the acromion in the middle, there is a small oval area that creates the joint connection to it. This joint is known as the ankle joint (articulatio acromioclavicularis) . The acromion serves as the origin of the pars acromialis musculi deltoidei .

The scapula joint socket ( Cavitas glenoidalis from Latin cavitas , hollow 'and gleno- , joint socket') is a cartilage-covered, oval joint socket, the vertical diameter of which is larger than the horizontal. Together with the head of the humerus, it forms the shoulder joint . It is surrounded by a cup lip, the glenoid labrum , which deepens the joint socket. The supraglenoid tubercle lies above the socket . This is where the long head of the biceps brachii muscle has its origin.