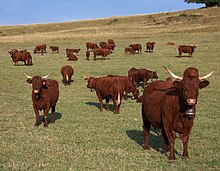 The salers is an old French cattle - race from the Massif Central .

The Salers beef is a very original breed of cattle, which used to be mainly used as a dairy breed, but has recently also been used as a meat breed. In the vicinity of Salers , 7000 year old cave paintings were found that are very similar to today's Salers cattle. Salers cattle also bear some resemblance to ancient Egyptian red cattle.

In its present form, Salers cattle were bred from the local breed of cattle in the 19th century by Ernest Tyssandier d'Escous , who came from Salers . Today's Salers cows calve about once a year and give between 6.9 and 8.9 liters of milk. It has a protein content of 3.4% and a fat content of 3.8%.

In France, the Salers is one of the four most important breeds with over 200,000 cows. In Switzerland are held to 450 cows.

Salers cheese is made from the milk of the Salers cattle ; a type of cheese that is said to have a 2000 year old tradition and is protected by the Appellation d'Origine Contrôlée . In 1991 92 farms were still producing Salers cheese and kept between 35 and 50 cattle of this breed on each farm.