The humerus ( lat. Os humeri or humerus for short ) is one of the longest and strongest tubular bones of the land-based vertebrates and forms the bony basis of the upper arm . In humans, five times the length of the humerus corresponds roughly to body size.

At the upper end of the humerus is its head ( caput humeri ), which forms a connection with the shoulder blade ( scapula , more precisely the glenoid cavity ) with an approximately spherical joint surface and thus forms the shoulder joint . The head is flanked by two bony protrusions ( greater tuberosity = large and minus tubercle = smaller). The large projection is located at the side ( laterally of the humeral head). His cephalad directed ( cranial ) surface is rounded and has three flat impressions, at which start from top to bottom the following muscles, which together with the subscapularis as rotator cuff are referred to: supraspinatus , infraspinatus muscle and teres minor . The side surface of the large protrusion is rough and convex outwardly and merges into the shaft without any visible limitation.

The small protrusion (lesser tuberosity) is smaller than the large one, but protrudes more towards the front ( frontal ). It also points in the direction of pull - to the middle ( medial ) - of the tendon of the subscapularis muscle, which it serves as an attachment.

A groove ( sulcus intertubercularis ) runs between the projections , through which the long tendon of the muscle biceps brachii and a branch of the anterior humerus artery ( arteria circumflexa humeri anterior ) run. In domestic horses there is another hump ( tuberculum intermedium ) in this channel . The groove extends away from the body ( distal ) to about the beginning of the middle third of the bone of the shaft and becomes increasingly less pronounced. On both sides of the groove there are two bone ridges ( crista tuberculi majoris and crista tuberculi minoris ), which arise from the bony protrusions. 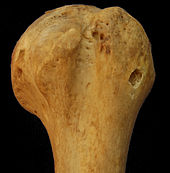 Neck, groove of the biceps tendon

If you follow the humerus further down, the neck, which is slightly drawn in opposite the joint surface, joins directly below the head ( collum anatomicum ). It serves as an attachment to the joint capsule of the shoulder joint . A second neck is delimited from it ( collum chirurgicum ), a surgically significant predetermined breaking point of the humerus, which lies below the protruding bones in the transition to the shaft.

The front lateral surface ( Facies anterior lateralis ) (in the proximal proximal smooth) part and rounded. It is covered by the deltoid muscle , the insertion of which appears in the middle of the surface as a roughening ( deltoid tuberosity ). Below it is a groove ( sulcus radialis ) coming from the posterior surface ( Facies posterior ) , in which a nerve ( Nervus radialis ) and an artery ( Arteria profunda brachii ) pivot obliquely from the rear - top to the front, which often at this point be pinched. In the part distant from the body, the anterior, lateral surface serves as the origin of the brachialis muscle .

The anterior, central surface ( Facies anterior medialis ) has a smaller extent than the anterior, lateral surface. Its upper part is narrow, forms the bottom of the channel between the protrusions ( sulcus intertubercularis ) and serves as the insertion of the latissimus dorsi muscle . A rough spot in the middle section forms the insertion of the coracobrachialis muscle . The part remote from the body serves as the origin of the brachialis muscle .

The rear surface ( facies posterior ) is almost completely covered by the lateral and central head of the triceps brachii muscle . The surface of the origin of both muscle heads is cut through by the sulcus radialis .

The front edge ( Margo anterior ) runs from the front of the large bony protrusion down to a pit ( Fossa coronoidea ) and thereby separates the front, lateral surface from the front, central surface. In the upper part it is a prominent bone ridge ( Crista tuberculi majoris ), which serves as an attachment for the musculus pectoralis major . In the middle it takes up the front border of the deltoid roughening. Far away from the body, it appears smooth and rounded and serves as the origin of the brachialis muscle .

The lateral edge ( Margo lateralis ) pulls from the back of the large bone protrusion to the attachment of the lateral joint knot ( Epicondylus lateralis humeri ) and thereby separates the anterior, lateral surface from the posterior surface. The upper half is rounded and difficult to define. It serves as the starting point for the teres minor muscle and remote from it as the origin for the lateral head of the triceps brachii muscle . In the middle it is crossed by the flat bone impression of the sulcus radialis . Towards the bottom it ends in a pronounced bone ridge ( Crista supracondylaris lateralis ), which serves as the origin of the musculus brachioradialis .

The central edge ( margo medialis ) extends from the small protruding bone to the attachment of the central joint knot ( epicondylus medialis humeri ). In the upper third it appears as a prominent bone ridge ( crista tuberculi minoris ). This is where the tendon of the teres major muscle starts . In the middle it has a slight indentation for the insertion tendon of the coracobrachialis muscle . The lower third rises to form a bone ridge ( crista supracondylaris medialis ) that becomes clearer with increasing approach to the attachment of the central joint knot .

The lower end of the humerus is flattened in the anterior - posterior direction and bears an articular knot ( condylus humeri ), which forms the elbow joint with its articular surfaces ( facies articulares ) to the spoke ( radius ) and ulna ( ulna ) . The side and center of the Gelenkknorrens each forms a cap ( epicondyle lateral and medial epicondyle off).

The lateral part of the joint surface consists of a button-like rounded and clearly bulging cartilage surface ( capitulum humeri ). It is connected (articulated) to the inwardly curved ( concave ) joint surface of the radial head ( caput radii ). A depression ( fossa radialis ) can be seen right next to the protruding cartilage surface . She takes on the leading edge of the spoke little head when the forearm in a strong flexion ( flexion ) is brought.

The central portion of the articular surface pulls in a lateral direction as an inwardly curved cylinder from the front to the back and thereby forms an extended, waisted joint roll ( trochlea humeri ). This joint roll articulates flush with the corresponding, crescent-shaped joint surface ( incisura trochlearis ) of the ulna. The lateral boundary separates the joint roller from the cartilage surface, which is connected to the edge of the head of the spoke, in a ridge shape. The central border is more clearly defined and marks the transition to the central attachment of the joint knot.

A small depression ( coronoid fossa ) can be seen in the anterior view close to the joint roll . Analogous to the recess for the head of the spoke, it takes up the raven-bill-like protrusion ( coronoid process ) of the ulna when the forearm is bent.

On the back of the humerus, there is another, clearly defined triangular depression ( fossa olecrani ) close to the joint roll . In the extended position of the forearm, it receives the olecranon , more precisely the ancone process of the ulna.