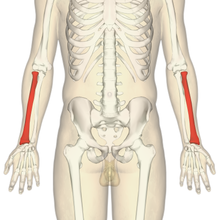 Location of the radius of the person (red)

The radius ( Latin - anat. For spoke ) is a bone of the forearm . The radius is located on the thumb side, in mammals more powerful than the ulna it is opposite, and a typical long bone .

The proximal end of the spoke ( epiphysis proximalis radii ) directed towards the center of the body is formed by the head of the spoke ( caput radii , syn. Radius head ) covered with hyaline cartilage , which acts like a wheel that is placed on the spoke neck ( collum radii ). This has an indentation ( fovea capitis radii ) for the humerus head ( capitulum humeri ) on its joint surface with the upper arm bone ( humerus ). In addition, it forms a partial joint ( articulatio humeroradialis ) of the elbow joint ( articulatio cubiti ). In addition, the spoke head is encompassed by a wreath-like joint surface ( circumferentia articularis ) for an articulated connection with the ulna.

Slightly below the spoke neck there is a clear roughening, the so-called radial bump ( tuberositas radii ). This forms the attachment point of the main tendon of the two-headed upper arm muscle ( muscle biceps brachii ). When turning inwards, i.e. thumb towards the body ( pronation ) and the palm of the hand pointing downwards when lying down (on the back), the tendon is wound around the body of the spoke, similar to a thread that is wound on a hand spindle .

The middle section of the spoke is called the spoke body or spoke shaft ( corpus radii ).

The spoke forms a functional unit on the forearm together with the ulna. This makes, among other anatomically is noticeable that both bones are coupled together in different ways. On the one hand, they each have an articulated connection to each other at their ( distal ) end, which is directed towards the middle of the body and remote from the middle of the body, and on the other hand, a fairly stable bond between the two spans almost the entire length ( membrane interossea antebrachii ). This relatively tight pull creates an edge ( Margo interosseus ) on the spoke on the side facing the ulna . This can be easily felt through the skin.

A very sharp edge can also be defined on the front of the spoke ( Margo anterior ). Its origin can be explained by a certain pull through the deep flexors on the forearm. It is precisely these that use the front edge in part as the original surface.

There is also a margin ( margin posterior ) on the back of the spoke . This is usually not as sharp-edged as less tension is exerted on it. At the end remote from the middle of the body, the beginning of the rear edge is created by the insertion of the outward turning device ( supinator muscle ) and continued further distally by fiber strands of the extensor.

Despite its almost cylindrical body, the edges just described can be used to delimit different surfaces on the spoke.

The front surface ( Facies anterior ) is the bone surface located between the front edge and the edge between the two forearm bones. It serves the middle and deep layers of the forearm flexors together with the ligament between the two bones as the point of origin.

Between the anterior and posterior edge there is also a surface called the lateral surface ( Facies lateralis ). Here, too, some of the fibers of the forearm muscles arise.

At the lower lateral edge, a protruding bone protrudes over the joint surface for the carpal bones. This protrusion is called the stylus process ( processus styloideus radii ). The upper arm spoke muscle ( musculus brachioradialis ) attaches to it.

The end of the radius ( epiphysis distalis radii ) remote from the middle of the body has a notch ( incisura ulnaris ) for the head of the elbow ( caput ulnae ) on the outer side . Together with the ulna, it forms the distal spoke-ulnar joint.

In some mammals (e.g. ungulates ) the bony radius is fused with the ulna ( synostosis ). These types are unable to perform turning movements ( pronation and supination ) in the forearm.