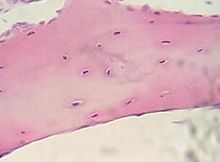 Cartilage tissue ( Latin: cartilage ) is a firm, pressure-elastic and flexurally elastic, vascular-free supporting tissue that also forms the basis of the bony skeleton during development. It can be cut and, like the other types of connective and supporting tissue, consists of cells and the surrounding intercellular substance , which consists of shaped and unshaped components.

Schematic example of a chondron

Chondroblasts , chondrocytes , and chondroclasts occur as cartilage cells . The precursor cells of the chondrocytes are called chondroblasts ("cartilage builders"). They are derived from mesenchymal stem cells and represent the active form of the cartilage cell, as they can synthesize all components of the cartilage matrix. As soon as they have stopped this synthesis function, they differentiate into chondrocytes , the actual cartilage cells. The chondrocytes are smaller than the chondroblasts, are spherical in shape, have a rounded cell nucleus and contain a lot of water, fat and glycogen . Their number, location and density are specific to each type of cartilage. Chondrocytes can still divide in an immature state, which can lead to the characteristic appearance of “isogenic groups”. They arise when the dividing cells are already surrounded by cartilage matrix and can no longer diverge. The isogenic groups are chondrocyte complexes, in which each complex has arisen from a single chondrocyte. The individual complexes appear to be surrounded by a cartilage capsule and to lie in a cartilage cavity (lacuna), which, however, only arises during fixation and reflects the space originally occupied by the chondrocytes. This is followed by a halo of cartilage, which can be clearly colored due to its basophilic property (= territory). The isogenic groups are usually arranged in columns. The isogenic group and its territory are summarized as the “chondron”. As soon as the chondrocytes are differentiated, they lose their ability to divide. As chondroclasts you again designated phagocytes who specializes in cartilage. They are much larger and are formed by fusion of several monocytes and thus mostly multinucleated giant cells . They play the main role in the breakdown of the early cartilage-bone model ( chondral ossification ) into the later bone or, in this context, also in healing after fractures .

The intercellular substance consists of shaped and unshaped components. The formed components include the fiber content made up of collagen or elastic fibers , which is different for the three types of cartilage. The main components of the unformed intercellular substance are water (approx. 70%), proteoglycans (mainly aggrecan ) and hyaluronic acid . The proteoglycans are polyanionic and therefore attract sodium cations, which in turn cause the influx of water.

Cartilage tissue in adults is free of vessels and nerves. The cells must therefore be fed by diffusion. This happens either via a connective tissue, protective covering ( perichondrium ), which covers the cartilage (with the exception of articular cartilage and fiber cartilage) as a cartilage skin, or in the case of articular cartilage via the synovial fluid of the joint space.

Hyaline cartilage has a high compressive elasticity, which is why it can be found wherever primarily compressive loads occur (e.g. in most joint surfaces). The chondrocytes are usually located together as chondrons. They excrete the transparent intercellular substance (intermediate substance, extracellular matrix ) in which they themselves lie with the collagen fibers (mainly of type II, also types IX and XI). Since the fibers have the same refractive index as the intercellular substance, the hyaline cartilage usually appears as a uniform mass under the light microscope. The collagen fibers are covered (masked) here. However, as the intercellular substance decreases with aging, some of the fibers become visible again. They are called asbestos fibers. The demarcation to the fibrous cartilage must then take place via the shape and arrangement of the chondrocytes.

Calcium deposits are found in the hyaline cartilage at an early stage. Its lack of blood vessels, together with the often high mechanical stress, favors degenerative processes. In the articular cartilage, the surrounding perichondrium is missing and thus also the mesenchymal cells, which can differentiate into chondroblasts, so that hardly any regeneration can take place. (The cartilage is nourished by the synovia .)

Elastic cartilage is the most cellular cartilage tissue. In principle, it is constructed like hyaline cartilage, but in the extracellular matrix it is also permeated by abundant elastic fibers , which ensure its characteristic yellowish color and consist of fibrillin , which is associated with amorphous elastin . Thanks to the interaction of these components, the elastic cartilage is very elastic in compression and bending. In addition, it shows no tendency towards calcification.

Elastic cartilage occurs in the auricle, the external auditory canal , the ear trumpet , the epiglottis , the cartilago corniculata , the ligamenta flava and the small bronchi .

Fibrous cartilage is also known as connective tissue cartilage and contains fewer cells than the first two types, but many collagen fibrils, including type I. It does not have a perichondrium.

Fibrocartilage occurs everywhere where shear forces occur, such as in the fibrous ring ( annulus fibrosis ) of the intervertebral discs ( discs ), the pubic symphysis and other symphysis , the pivot lips ( acetabular labrum , glenoid labrum ) and the menisci .

Fibrous cartilage also occurs in the temporomandibular joint and the sternoclavicular joint (SCG), as well as transitionally in secondary bone healing .

Formation of cartilage tissue and its growth

During the process of cartilage formation, which is also called chondrogenesis , the chondroblasts, which are close together , initially enlarge from the mesenchyme . These finally take on their function and thereby remove a matrix that is rich in chondromucoprotein . At the same time, tropocollagen is produced and deposited as collagen in the extracellular space . As a result of the production of these substances, the chondroblasts move further and further apart. At the same time, they differentiate into chondrocytes, which either lie individually in the matrix or multiply through division and can then occur as isogenic groups. The growth of the cartilage thus occurs primarily through the increase in size of the intercellular substance, which is also known as intussusceptional growth and only occurs in the context of the cartilage formation. For the further growth or, to a limited extent, also for the regeneration of the cartilage tissue, the attachment growth ( appositional growth ) is mainly responsible. Here cartilage tissue is formed from the surface, i.e. through the cartilage skin. Chondroblasts, which synthesize the matrix and can still divide mitotically , sit in their inner layer .

Diseases and damage to the cartilage

In cartilage disorders, the matrix between the chondrocytes deteriorates . One speaks of unmasking the cartilage. The surface becomes rough, which limits the function of the affected joint, and osteoarthritis develops. Cartilage disease of the kneecap ( chondropathia patellae ) is very common and can lead to difficulties relatively early on, even in children. In the thorax, at the border between the bony and cartilaginous ribs, bizarre calcifications can occur, this is called chondrocalcinosis .

Polychondritis (from "Poly-": Greek = a lot, "chondr": Greek chondros = cartilage and "-itis": ending for inflammatory diseases; relapsing polychondritis in English ): Recurrent polychondritis is an extremely rare disease mostly Relapsing, sometimes persistent inflammation of the cartilage. All structures or organs which consist of cartilage or in which cartilaginous components are present can be involved.

Cartilage structures can also be damaged. Such damage can result from a variety of causes, from an unfortunate fall or sports accident (traumatic), previous knee injuries (post-traumatic), or wear and tear over time. Immobilization for a long time can also result in cartilage damage.

Damage to the cartilage caused by excessive stress such as jogging is often discussed, but has not yet been proven. Rather, scientific studies show good adaptation (adaptability) of human cartilage to chronic stress, provided that no previous damage is present. In long-distance runners, the cartilage structure shows a recovery just a few minutes after the end of the sporting activity.